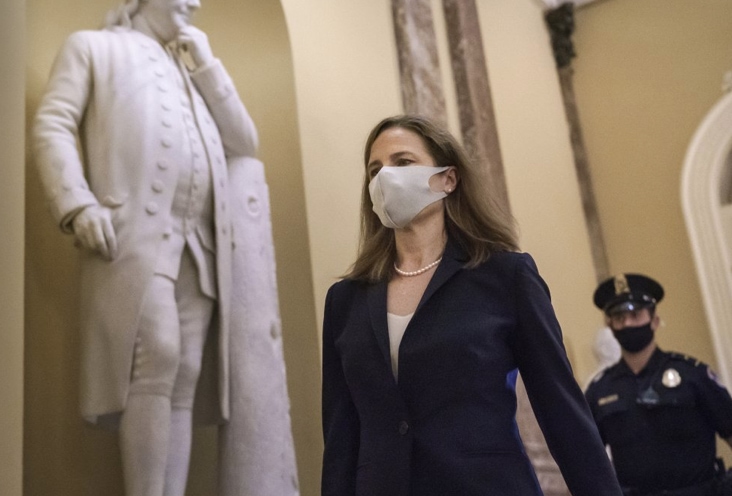 Opinions on the partisan vote predictably fell along party lines.

Florida’s two U.S. Senators, Marco Rubio and Rick Scott, voted with their party to confirm Barrett. The only Republican to buck the party was Maine Sen. Susan Collins, joining all 47 Democrats in opposition.

After the confirmation, Scott tweeted that Republicans did their job to confirm a qualified justice.

“The Democrats want judges that are activists who will legislate from the bench,” he said in a statement. “Thankfully, Judge Amy Coney Barrett believe in the proper role of a judge envisioned by the Framers when they designed a three-branch system of government in our Constitution.”

“The Democrats refused to engage in this process and attempted to smear Judge Barrett, because they knew they couldn’t question her qualifications,” the Junior Senator added. “Senate Republicans refused to back down and let the Radical Left destroy a good person and a great judge. I’m honored to support Judge Barrett’s nomination today, and I look forward to her lifelong service as an Associate Justice of the U.S. Supreme Court.”

The state’s senior Senator waited till the morning to publish his thoughts.

At 48 years old, Barrett will solidify conservatives’ control over the Court as the sixth conservative on a bench of nine.

“Amy Coney Barrett has a strong record in protecting the right to life and our Constitution,” he said. “She will serve as a positive role model for this country, not only as an experienced and exceptional jurist, but also as a dedicated parent. I’m pleased to see that my colleagues in the Senate agree. Amy Coney Barrett is the right choice for the U.S. Supreme Court and I’m confident that we will see great things come from her during her time as a Supreme Court Justice.”

But U.S. Rep. Lois Frankel, a Boca Raton Democrat, had other thoughts.

“Trump and Republicans have stalled on critical COVID relief, yet raced to install a justice to the Supreme Court who threatens health care for millions,” she said. “Make no mistake: by voting to confirm Judge Amy Coney Barrett, the Senate voted to dismantle health care, women’s rights, workers’ rights and voting rights, and to set back progress for a generation.”

“This is a shameful day for the United States Senate. Senate Republicans have cut at the historic dignity of the chamber with a partisan vote that so egregiously and intentionally disregards the will of the American people. This sprint to confirm a justice to a lifetime appointment shows how little respect they have for our democractic process and the American people.

And he directed some venom at colleagues from his home state.

“Florida’s Senators showed complete disdain for the more than six million Floridians who’ve already voted in the election. Marco Rubio, in a brazenly hypocritical flip-flop, decided the rules are different when it works for him,” he said. “As millions of Americans’ livelihoods are at stake and many have waited months for COVID-19 relief, it is disheartening to see our Senators put politics ahead of the American people. Elected officials are chosen by communities to represent their best interests. Through this confirmation, Senate Republicans have chosen to prioritize their own.”

In the hours leading up to the vote, Democrats railed against Barrett’s impending nomination.

“Trump has told us exactly why he is sending Coney Barrett to the #SCOTUS: to overturn the #ACA & its protections for pre-existing conditions,” U.S. Rep. Debbie Wasserman Schultz tweeted. “Every @GOPSenator who votes to confirm her is complicit in this plot to rip away care from 20 million Americans.”

“Justice Barrett will uphold the Constitution and integrity of our nation’s highest court,” he said.

“Throughout this confirmation process I have been struck by the humility of now Justice Amy Coney Barrett,” he wrote. “Her belief in judicial restraint and her recognition of the limited – albeit important – role the courts play gives me hope that our Constitution will endure.”

“Instead what we got was a shamelessly short and partisan process rammed through during a global pandemic and just days away from a major election,” she said in a statement. “The dangers of this politically motivated Supreme Court confirmation cannot be overstated, especially when it comes to the health and well-being of America’s women and girls, our LGBTQ+ communities, people of color and immigrants.”

Added the Representative: “Difficult challenges are ahead but we remain unfazed, and urge everyone to find power in pain, and for those who are eligible to vote like you’ve never voted before. Let this upcoming election be a referendum on President Trump’s dangerous policies, and let this SCOTUS nomination be the last victory of this administration.”

“During her hearings, Judge Barrett demonstrated her sound judicial philosophy and commitment to adhering to the Constitution,” he said. “We commend the Senate for voting to confirm this qualified nominee to the Supreme Court. Our state and nation will benefit from Judge Barrett joining the High Court. There was overwhelming support from our activists on Judge Barrett’s nomination, and we thank Senators Rubio and Scott for voting for this excellent nominee who will defend the freedoms of every American on the Supreme Court.”

Florida Democratic Party Chair Terrie Rizzo trashed both of Florida’s Senators for their votes to confirm ahead of the election.

“Republicans in the Senate, including Florida’s own Marco Rubio and Rick Scott, just voted to strip health care from millions of Floridians in the midst of a pandemic. Donald Trump has made it perfectly clear that he hopes this Justice will overturn the Affordable Care Act, ending protections for eight million Floridians with pre-existing conditions,” she said.

“Everything is at stake in this election and as Floridians, we have the power to elect a president who will fight to improve health care, not take it away. Make your voice count and vote early for Joe Biden and Kamala Harris.”