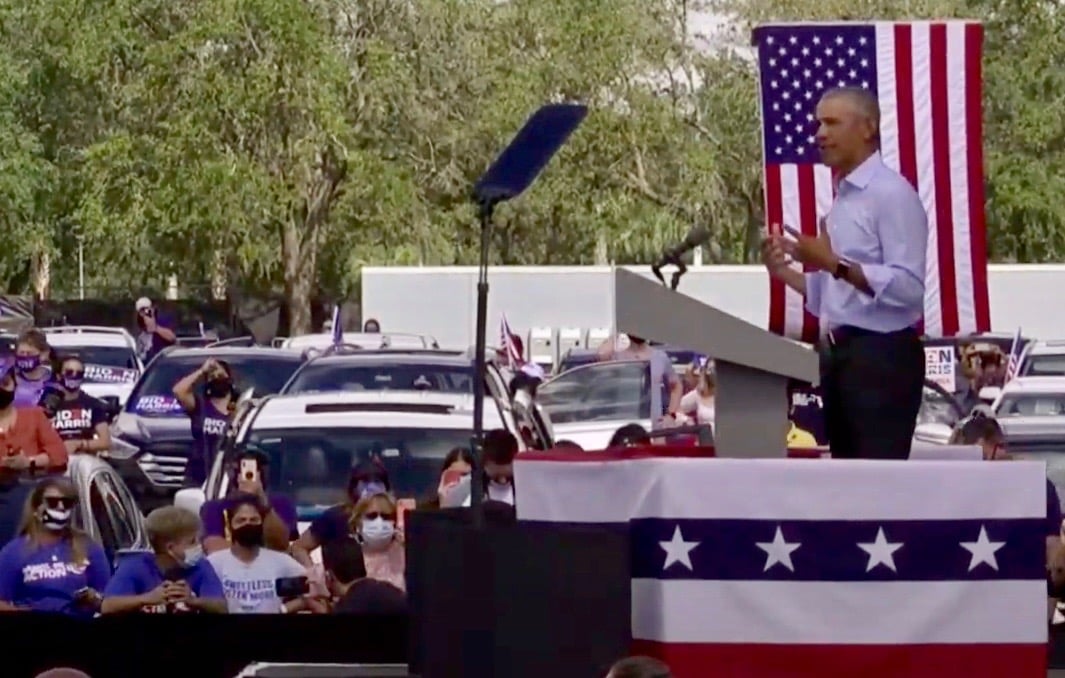 "He hasn't shown any interest in doing the work, or helping anybody but himself and his friends."

The most recent Democratic President also took up the cause of electing his former Vice President Joe Biden during a Tuesday afternoon speech to a car rally outside Camping World Stadium.

Obama, however, spent much of his 39-minute speech painting his successor as someone not up to the task and not caring to do the work necessary, while instead sowing  division, anger, and racial animosity at home and disrespect abroad.

“I didn’t think Donald Trump would embrace my vision or my policies, but I did hope for the country’s sake that he might show some interest in taking the job seriously. But he didn’t,” Obama said.

“He hasn’t shown any interest in doing the work, or helping anybody but himself and his friends, or treating the presidency as anything more than a reality show that can give him the attention that he craves,” Obama continued. “And he does crave attention.”

He praised Biden’s character and offered his own accomplishments and record as President, serving alongside then-Vice President Biden. Obama charged that Trump takes false credit for things initiated under Obama and Biden and refuses to take responsibility for emerging problems from the COVID-19 pandemic and the resulting economic collapse, or from rising levels of racist activity or threats from Russia.

Obama blasted Trump for mocking, in his recent speeches, the media’s coverage of the coronavirus pandemic.

“He’s jealous of COVID’s media coverage!” Obama said. “If he had been focused on COVID from the beginning, cases wouldn’t be reaching new record highs across the country this week.

“If he were focused on COVID now, the White House wouldn’t be having its second outbreak in a month. The White House? Let me say this. I lived in the White House for a while. You know, it’s a controlled environment. You can take some preventive measures in the White House to avoid getting sick. Except this guy can’t seem to do it,” Obama said. “He’s turned the White House into a hot zone. Some of the places he holds rallies we see spikes right after he leaves town.”

Obama said the Trump White House has “completely screwed this thing up.”

“Listen, winter is coming. They’re waiving the white flag of surrender,” he said. “We can’t afford four more years of this. That’s why we’ve got to send Joe Biden to the White House. Because we cannot afford this kind of incompetence and disinterest.”

“With more than 22 million direct voter contacts in Florida alone, Trump Victory’s permanent, data-driven ground game cannot be matched by Joe Biden’s anemic efforts in the Sunshine State. Sending Barack Obama to stump for Biden for the second time in one week won’t make a dent in the advantage we’ve built thanks to our field army and frequent visits from President Trump and his family,” Vaughn said.

Obama praised Biden as someone who will take the coronavirus crisis and economic needs seriously.

“He believes everybody is important. And that empathy, that decency, that belief in other people, that’s who Joe is. And that’s who he’ll be. I can tell you the presidency does not change who you are. It reveals who you are,” Obama said.

He credited Biden with making him a better President.

He pointed out that if Trump’s tenure ends in January he will be the first President since Herbert Hoover, who oversaw the start of the Great Depression in 1929, to oversee an American economy that lost jobs during his reign.

“Speaking of health care by the way, you may have noticed, Republicans love saying right before an election how they’re going to protect people who have pre-existing conditions. Have you noticed that? Well you know what? Joe and I actually protected them, 10 years ago, with the Affordable Care Act,” Obama said.

Obama flatly accused Trump of having no plan to replace his Affordable Care Act if the Supreme Court strikes it down, as Trump is requesting.

Obama also played a little baseball favoritism in Florida, probably figuring Biden already has the Los Angeles vote in the bag. He noted that the last time the Tampa Bay Rays made it to the World Series was in 2008, when “Florida sent me to the White House.”

previousMore than 6.4M votes cast so far in Florida