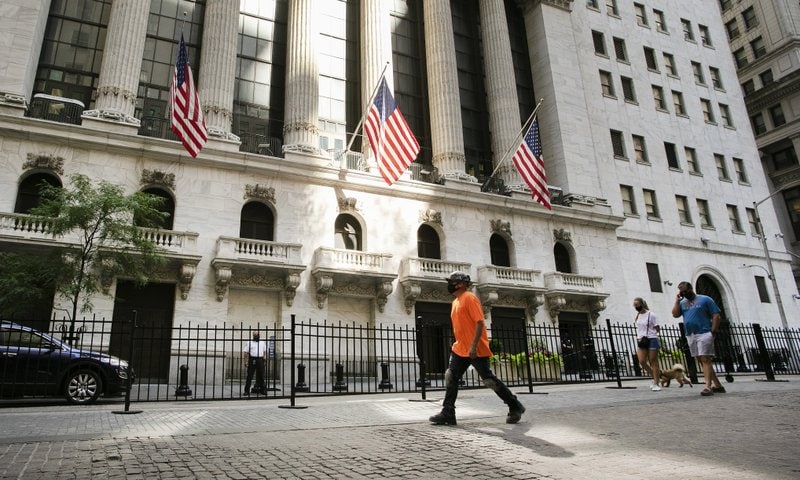 Stocks are falling again Friday as Wall Street closes out a punishing week and its first back-to-back monthly loss since worries about the pandemic were peaking in March.

Worries about whether expectations built too high for some of the stock market’s biggest stars helped drive the losses. They piled on top of fears that built earlier this week about coming economic damage due to surging coronavirus counts around the world, Washington’s inability to provide more support for the economy and uncertainty surrounding the upcoming presidential election.

Much of the market’s focus Friday was on Apple, Amazon, Facebook and Google’s parent company. They are four of the five biggest stocks in the S&P 500 by market value, which gives their movements outsized sway on the index, and they were principal forces behind Wall Street’s huge rally since March.

All four reported profit for the summer that was even better than analysts were expecting, just like the other stock in the Big Five did earlier this week. But also like Microsoft, most nevertheless fell as investors found reasons for concern within their reports.

Apple dropped 5.3% after investors focused on weaker revenue than expected for its iPhones and sales in China. Amazon fell 4.6%, and Facebook lost 5.6%.

Twitter, another high-profile tech stock, slumped 20.3% for the largest loss by far among stocks in the S&P 500. It also reported better-than-expected earnings for the latest quarter. Investors focused instead on its growth in daily users, which fell short of analysts’ expectations.

Google’s parent company, Alphabet, was an outlier and rose 4.7% after reporting growth in digital ad spending.

A similar trend has been occurring across the market: Stocks are not getting the bounce they usually do after reporting results that beat analysts’ expectations. And they’ve been giving investors plenty of opportunities to do so: With nearly three quarters of the S&P 500 by market value having reported, 84% of companies have beat expectations, according to Credit Suisse.

Analysts say that’s an indication that expectations may have built too high through the market’s big rally and that investors’ attention may simply be elsewhere given all the uncertainties sweeping the market.

Much of the market’s focus has been on what’s to come for the economy when coronavirus counts are rising at troubling rates across Europe and the United States.

Several European governments have already brought back restrictions on businesses to slow the spread of the virus. Even if the strictest lockdowns don’t return in the United States, the worry is the pandemic’s rising death toll will drive customers away from businesses by itself and undercut profits.

At the same time, Washington has been unable to deliver more aid to the economy. That’s despite investors and economists saying it’s sorely needed following the expiration of supplemental benefits for laid-off workers and other stimulus approved by Congress earlier this year.

“The Fed is saying this, the market is saying this, and most economists are beginning to adjust their fourth quarter forecasts with the expectation that growth without stimulus is going to be hard to achieve, especially as COVID-19 cases seem to set new daily records each day,” said Kevin Giddis, chief fixed income strategist at Raymond James.

Democrats and Republicans, though, continue to blame the other side for holding up a deal.

Data on the economy recently has been coming in mixed, following its initial burst after its coronavirus-induced coma. Reports on Friday showed that personal incomes and consumer spending in the country rose more than expected last month. But economists warned it’s unclear whether the momentum can continue if the worsening pandemic leads to more business closures and layoffs.

In markets around the world on Friday, caution was still continuing to dominate. But the moves were not as violent as earlier in the week.

A measure of fear in the U.S. stock market, the VIX index, flipped between small gains and losses before inching up 0.8%. The yield on the 10-year Treasury ticked up to 0.85% from 0.83% late Thursday.

nextAhead of the election, a landslide of documentaries