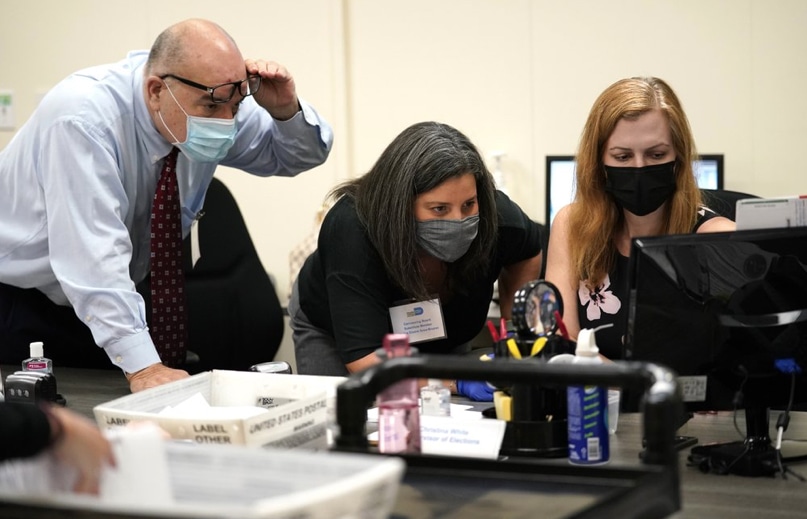 Democrats and Republicans in Florida have engaged legions of lawyers ready to rush to court at any sign of voter suppression, fraud or other political shenanigans in this year’s election.

So far, the lawsuits have been few, but Florida is well-known for its legal battles in past elections.

The main hot-button legal issue this year is the use and counting of mail-in ballots, which President Donald Trump has criticized as a potential source of fraud, but which both parties have promoted in Florida — especially during the coronavirus pandemic.

Juanica Fernandes, executive director of the nonprofit State Voices Florida group that promotes voting and civic engagement, said hundreds of Florida mail-in ballots have already been rejected because of issues such as new addresses and mismatched signatures. Voters do have the right to “cure” these problems, but that may not be enough.

“This leaves a voter without an opportunity to have their voice heard, and that’s not acceptable,” Fernandes said. “What’s happening is they are not counting the ballots at all.”

A week ahead of Tuesday’s election, advocates said about 21,000 mail-in ballots had been flagged in Florida because of a signature problem. About a third of those had already been fixed. More than 4.2 million votes had been cast by mail statewide, according to the Florida Secretary of State’s office.

As yet, there has not been widespread litigation in Florida related to the election. One battle fought earlier this year was over felons regaining their right to vote after the passage of a 2018 amendment, which ended in an appeals court ruling affirming a state law stating they must first satisfy any fines or fees in addition to a prison sentence.

But given Florida’s history and its prized 29 electoral votes, anything is possible. Of course, perhaps the most famous legal battle in presidential election history came in 2000, when Republican George W. Bush wound up defeating Democrat Al Gore in Florida by 537 votes — handing Bush the presidency after the U.S. Supreme Court ruled in his favor.

Tallahassee attorney Barry Richard, who represented Bush in 2000, said that experience casts a long shadow over elections in Florida, although voting practices and laws have changed markedly since then.

“My primary premise is that there’s a lot more angst about what could happen as opposed to what may actually happen this time,” Richard said. “I think the biggest problem we might have would be delay. We don’t have that as much in Florida because ballots have to be in by Election Day.”

Richard Hasen, a law and political science professor at the University of California-Irvine and election law expert, said Florida may not be quite in the forefront of the nation’s election-related legal battles as in past years.

“It’s still in my top five,” Hasen said. “It’s not as high on my list as it has been in the past. It’s that other states, especially during a pandemic, are doing a worse job and are more likely to be pivotal.”

Yet the GOP and the Trump campaign, as well as the Democrats and presidential nominee Joe Biden, are taking no chances.

Florida Republicans, for example, have trained attorneys and volunteers in advance of the election. Some will be poll watchers, some will observe canvassing boards where votes are counted, and others will monitor legal developments, state party spokeswoman Alia Faraj said.

“Our efforts include ensuring that supervisors of elections are following the law and observing and documenting any potential fraud or irregularities that could impact the election,” Faraj said in an email. “Our top priority remains ensuring that every legal vote is counted, that no voter is disenfranchised, and that voters understand election laws and procedures.”

There are very few cases of election fraud in the U.S., despite Trump’s many claims to the contrary.

Similarly, the Biden campaign is training volunteers and lawyers to watch for evidence of voter suppression, especially among Black and Hispanic voters.

“Voting as a fundamental right is under attack from a range of bad actors,” said Mone Holder, voter protection advocate for the Advancement Project, a civil rights and voting rights organization. “These voting suppression tactics highly impact voters of color.”

Richard, the Bush lawyer from 2000, said he thinks Florida courts have learned how to deal quickly with election challenges and changes in state laws make a lengthy delay less likely. But, he added, you never know.

“In my business, nothing is out of the realm of possibility,” Richard said. “The kind of fraud you would need to affect the election would have to be massive. A lot of what people are freaking out about this time is just the fact we had that experience in 2000.”

nextRick Scott 'not focused' on running for President in 2024