Joe Biden to meet with Mexican president amid migration issues 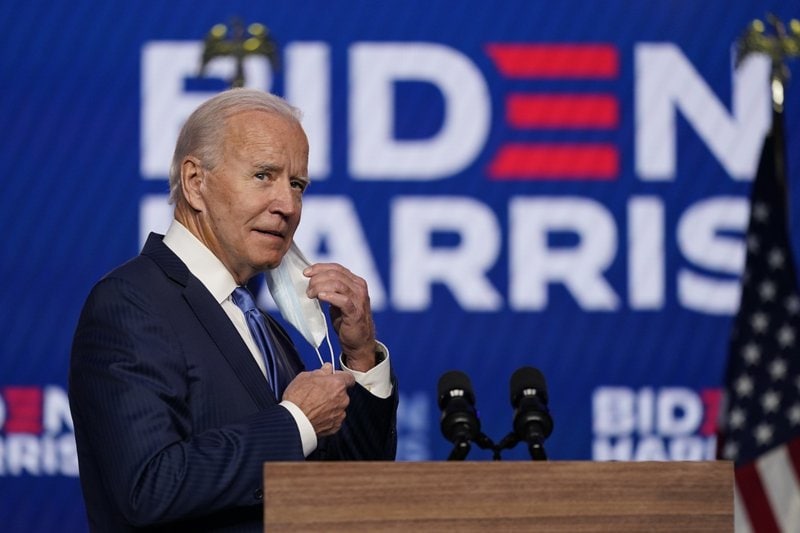 The delay in producing a verdict could be attributed to high turnout, a massive number of mail-in ballots and slim margins between the candidates.

Democrat Joe Biden edged ever closer Saturday to a victory over President Donald Trump as the long, exacting work of counting votes extended into a fourth day after the election.

The delay in producing a verdict could be attributed to high turnout, a massive number of mail-in ballots and slim margins between the candidates. Biden held leads in Pennsylvania, Nevada and Georgia, putting him in a stronger position to capture the 270 Electoral College votes needed to take the White House.

There was intense focus on Pennsylvania, where Biden led Trump by more than 28,000 votes, and Nevada, where Biden was up by about 22,000. The prolonged wait added to the anxiety of a nation facing historic challenges, including the surging coronavirus pandemic and deep political polarization.

When Biden addressed the nation Friday night near his home in Wilmington, Delaware, he acknowledged the sluggish pace of the count “can be numbing.” But he added: “Never forget the tallies aren’t just numbers: They represent votes and voters.”

He expressed confidence that victory ultimately would be his. “The numbers tell us a clear and convincing story: We’re going to win this race,” the former vice president said.

Standing alongside running mate Kamala Harris, Biden wasn’t able to give the acceptance speech at that time that his aides had hoped. But he hit notes of unity, seemingly aimed at cooling the temperature of a heated, divided nation.

Trump took to Twitter and remained out of sight as the results gradually expanded Biden’s lead in must-win Pennsylvania. On Saturday, Trump repeated baseless allegations of election fraud and illegal voting, but they were quickly flagged as potentially misleading by the social media platform.

Trump’s campaign was mostly quiet. It was a dramatic difference from earlier in the week, when officials vocally projected confidence and held news conferences announcing litigation in key states. But his inner circle was touched once again by the coronavirus.

Trump’s chief of staff, Mark Meadows, contracted the virus, according to two senior White House officials who spoke on condition of anonymity because they were not authorized to publicly discuss private matters. Several other members of the White House staff and Trump’s campaign team also tested positive.

Trump’s handling of the pandemic has been the defining issue of the campaign. The president, first lady Melania Trump and several other people in Trump’s orbit have fallen ill and recovered.

A few states remained in play in the race: Georgia and North Carolina were still too early to call, along with Pennsylvania and Nevada. In all four states the margins between Trump and Biden were too narrow and the number of ballots left to be counted too great for The Associated Press to declare a winner.

The uncertainty left Americans across the nation glued to their TVs and smartphones, checking for updates to a vote count that, for many, appeared to inch along.

The delays — and the reasons — varied from state to state. In Pennsylvania, officials were not allowed to begin processing mail-in ballots until Election Day under state law. In Nevada, there were a number of provisional ballots cast by voters who registered on Election Day, and officials had to verify their eligibility. Recounts could be triggered in both Pennsylvania and Georgia.

With his path to reelection appearing to greatly narrow, Trump was testing how far he could go in using the trappings of presidential power to undermine confidence in the vote.

Trump did claim that he won late on Election Night. He also tweeted that he had “such a big lead in all of these states late into election night, only to see the leads miraculously disappear as the days went by,” although it was well known that votes cast before Tuesday were still being legally counted.

Pro-Trump protesters — some openly carrying rifles and handguns — rallied outside vote-tabulation centers in a few cities Friday, responding to Trump’s groundless accusations that the Democrats were trying to “steal” the White House. Roughly 100 Trump supporters gathered for a third straight day in front of the elections center in Phoenix, where hundreds of workers were processing and counting ballots.

Maryland GOP Gov. Larry Hogan, a potential presidential hopeful who has often criticized Trump, said there was “no defense” for Trump comments “undermining our Democratic process. America is counting the votes, and we must respect the results as we always have before.”

But others who are rumored to be considering a White House run of their own in four years aligned themselves with the incumbent, including Sen. Josh Hawley, R-Mo., who tweeted support for Trump’s claims, writing that “If last 24 hours have made anything clear, it’s that we need new election integrity laws NOW.”

Election officials in the battleground states of Arizona, Georgia, Michigan, Pennsylvania and Nevada — both Republican and Democrat — have all said they saw no widespread voting irregularities or major instances of fraud or illegal activity.

Even Trump’s own administration has pushed back at the claims of widespread voter fraud and illegal voting, without mentioning that Trump was the one making the allegations. The Cybersecurity and Infrastructure Security Agency, which oversees U.S. election security, also noted local election offices have detection measures that “make it highly difficult to commit fraud through counterfeit ballots.”

Trump’s campaign has engaged in a flurry of legal activity across the battleground states.

On Friday evening, Supreme Court Justice Samuel Alito approved a GOP request ordering county boards to comply with Pennsylvania state guidance to keep the late ballots separate from those received before or on Election Day. Alito, however, did not direct election officials to stop counting the ballots, as the Republicans had also sought.

But judges in Michigan, Georgia and Pennsylvania quickly swatted down other legal action. A federal judge who was asked to stop vote counts in Philadelphia instead forced the two sides to reach an agreement without an order over the number of observers allowed.