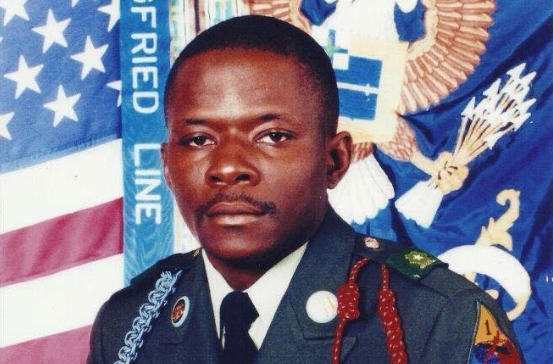 House Resolution 8276 already was approved by the House of Representatives in September. It now awaits a signature from President Donald Trump.

In addition to signing this bill, Trump still would have to actually award the medal posthumously to Cashe, who died from combat wounds he received in Iraq in 2005.

HR 8276, sponsored by Murphy and co-sponsored by Waltz and Republican Rep. Dan Crenshaw of Texas, would waive a five-year statute of limitations that has expired for normal consideration for Medal of Honor awards. The bill directs the President to award the medal “for acts of valor during Operation Iraqi Freedom.”

Such a commendation has been receiving growing support including an endorsement this summer by former Defense Secretary Mark Esper, though Trump fired Esper earlier this week. The Department of Defense is expected to formally recommend the award to Trump, once HR 8276 makes it possible.

If Trump follows through, the honor actually would be an upgrade from the Silver Star that Cashe received posthumously.

In Iraq in 2005, Cashe saved multiple soldiers after their fighting vehicle hit an improvised explosive device and caught fire. Cashe returned to the burning vehicle, again and again, to pull his soldiers out of the flames, all while he himself was on fire and exposed to incoming enemy gunfire. He later died as a result of his wounds.

Murphy, whose Florida’s 7th Congressional District includes Cashe’s hometown of Oviedo as well as his birthplace of Sanford, joined ongoing efforts by his family and fellow soldiers in 2017 to get his award posthumously upgraded. In 2019 Waltz, who represents the adjacent Florida’s 6th Congressional District and is himself an Army combat veteran and Army National Guard lieutenant colonel, joined the cause. So did Crenshaw, a Navy SEAL veteran.

“I am so grateful the Senate passed our bill to pave the way for the President to award Alwyn Cashe the Medal of Honor,” Murphy stated in a news release issued by her office. “We are now very close to recognizing this unbelievably heroic soldier, who died saving his men, with our nation’s highest award for combat valor — which he earned beyond a shadow of a doubt.”

Offered Waltz: “It’s not every day you read an extraordinary story like Alwyn Cashe’s. His bravery in the face of danger has inspired so many already — and this is a significant step forward to properly recognize him for his heroism. I’m incredibly proud to see both sides of the aisle, in the House and the Senate, come together to honor Cashe’s legacy and award him the Medal of Honor.”