Bob Lotane: Protest is in our DNA 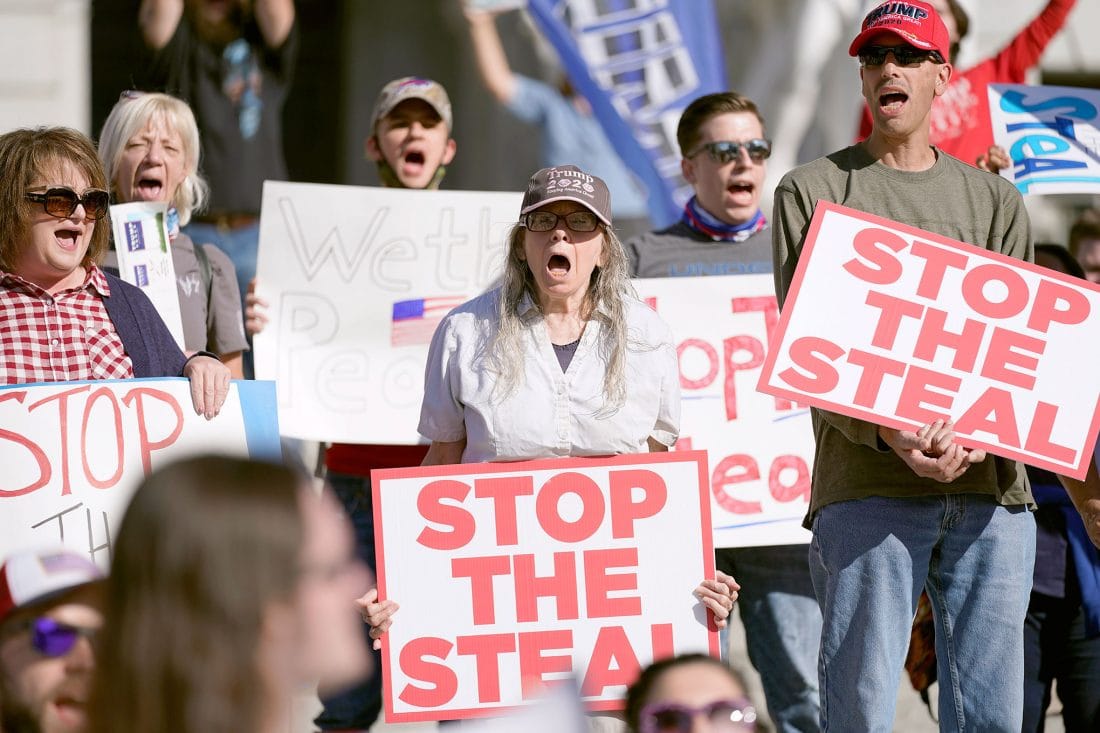 History has its eyes on those lawmakers who perpetuated the fabrication about election fraud.

Donald Trump’s mind meld about election fraud sucks in more Republicans every day. Some of those playing the part of duped parrots are leading Florida politicians, including Gov. Ron DeSantis and Sens. Rick Scott and Marco Rubio.

In perpetuating this fantasy, they may believe it’s just politics as usual. It’s just how they play the game, right?

Perhaps, but repeating a lie to the point where even the liar begins to believe it can have a lasting impact on legacies. History is cranky to those who believe they’re above the truth.

The first line of his obituary will read something like this: Pete Rose, one of the greatest players in history, was banned from baseball for life …

Rose committed what I call the Garden of Eden sin by gambling on his own team, the Cincinnati Reds. That carries baseball’s harshest penalty.

What does that have to do with the political predicament America faces today? Maybe more than you might think at first blush. I learned that from a conversation several years ago with John Dowd. He’s the lawyer who investigated Rose’s gambling habits, and it was ironclad.

Yet, when baseball Commissioner Bart Giamatti confronted Rose with the evidence, Pete repeated the lie he told reporters for months: It’s not true.

Boom! His banishment was swift and unequivocal.

That was 31 years ago. Rose finally admitted that, yeah, he was guilty, but it was too late. Despite repeated requests for reinstatement and a fierce public relations offensive, he’s still out of baseball.

He likely will die that way.

I asked Dowd what would have happened if Rose had admitted it in that fateful meeting. He said Rose probably would have gotten off with a suspension, maybe a year or two, and would have been welcomed back into the fold as the prodigal hit king.

Those are words of caution for political leaders who blindly repeat Trump’s absurd claims. Don’t lose your soul because you lost an election. For once, put the country over your party and condemn this nonsense. Don’t turn a short-term loss into a lasting stain.

Fraud on the scale Trump claims is more than a ridiculous hail Mary pass. It undermines one of the pillars of American democracy.

The POLITICO/Morning Consult survey found that 70% of Republicans don’t believe the election was fair, and 72% believed that ballots were tampered with.

This charade was a calculated strategy by Trump and supporters because he likely knew he would lose.

However, rather than accept that dreaded label – loser – Trump attacked, without evidence, ballots’ legitimacy.

Something that reckless should be met with fierce condemnation from members of his own party. A few spoke up, but not many.

Rubio took a swipe at the media, of course.

“Now for those in the media who are angry that Republicans won’t just take their word for it that Biden won, I think you need some self-awareness,” he thundered. “And therefore, President Trump is well within his legal rights to pursue all these things under these laws now.”

We pause to let you regain your breath after Rubio’s lecture about self-awareness, because that’s just weird.

Scott chirped, “This is a close race, and Donald Trump will and should use every avenue at his disposal to make sure every legal vote is counted.”

DeSantis was the most absurd of all. He suggested lawmakers in Michigan and Pennsylvania ignore the vote total and choose Republican representatives to the Electoral College.

“Under Article II of the Constitution, presidential electors are done by legislatures and the schemes they create in the framework,” DeSantis said on Fox.

“If there’s departure from that and they’re not following the law, if they’re ignoring law, then they can provide remedies as well, so I would exhaust every option to make sure we have a fair count.”

DeSantis said that after Republican legislative leaders in Pennsylvania, state Sen. Jake Corman and state Rep. Kerry Benninghoff, said in an op-ed they could not do that even if they wanted to.

They are both Republicans.

“The only and exclusive way that presidential electors can be chosen in Pennsylvania is by the popular vote,” they wrote. “The Legislature has no hand in this process whatsoever.”

When Trump recently chose Amy Coney Barrett for the U.S. Supreme Court, he reminded angry Democrats that elections have consequences.

The one on Nov. 3 has consequences, too.

Republicans who support a lie that the victory was illegitimate may face consequences that can linger long after they leave office. What will the first line of their obituaries say?

As the musical “Hamilton” put it, history has its eyes on you.