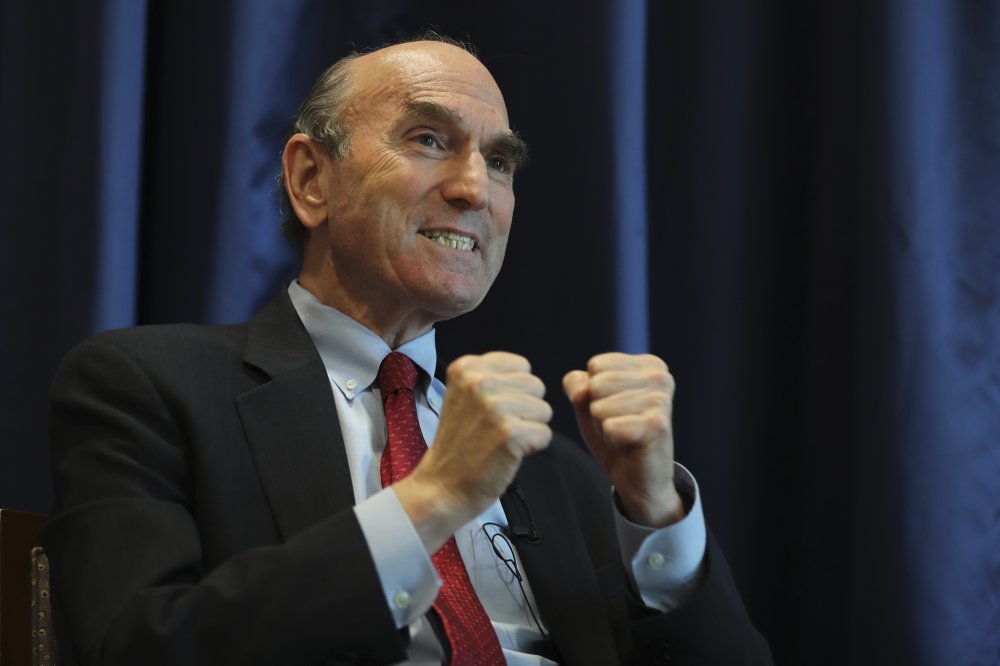 Tensions have been high between the two nations during Donald Trump's presidency.

The U.S. special representative for Iran insisted Thursday that a pressure campaign of sanctions targeting Iran would persist into the administration of Joe Biden, even as the President-elect has pledged to potentially return America to Tehran’s nuclear deal with world powers.

Elliott Abrams, who also serves as the U.S. special representative to Venezuela, said sanctions targeting Iran for human rights violations, its ballistic missile program and its regional influence would go on. That, as well as continued scrutiny by United Nations inspectors and American partners in the Mideast, would maintain that pressure, he said.

Iran now has far more uranium than allowed under the deal since President Donald Trump unilaterally withdrew from the accord in 2018. The Mideast also has been roiled by tensions between Tehran and Washington, which pushed the two countries to the brink of war at the beginning of the year.

“Even if you went back to the (deal) and even if the Iranians were willing to return … this newly enriched uranium, you would not have solved these really fundamental questions of whether Iran is going to be permitted to violate long-term commitments it has made to the world community,” Abrams told The Associated Press in an interview at the U.S. Embassy in Abu Dhabi.

Iran’s politicians have increasingly discussed the possibility of the U.S. returning to the deal, which saw Iran limit its enrichment of uranium in exchange for the lifting of economic sanctions.

Alireza Miryousefi, a spokesman for Iran’s mission to the U.N., dismissed Abrams’ comments.

“The policy of maximum pressure and sanctions against Iran has failed,” Miryousefi told the AP. “The U.S. effort to abuse this corrupt policy is futile and will only lead to further isolation of the U.S. on the international stage.“

Abrams replaced Brian Hook as America’s envoy on Iran, who announced he’d leave his post in August after serving as the face of Trump’s maximum-pressure campaign. That effort has floundered internationally as the U.S. and its Gulf Arab allies failed to convince the U.N. to stop an arms embargo on Iran from expiring in October.

Iran’s enriched uranium stockpile, which would have been under 300 kilograms (660 pounds) in the deal, now stands at over 2,440 kilograms (5,380 pounds), according to the latest report by U.N. inspectors. That’s potentially enough material to make at least two nuclear weapons, experts say, if Iran chose to pursue the bomb.

Iran also is enriching uranium to as much as 4.5% purity, higher than allowed under the accord but still far lower than weapons-grade levels of 90%. Tehran abandoned all limits on its enrichment months after Trump’s pullout from the agreement, even as the deal’s other international partners China, France, Russia, the United Kingdom and Germany have tried unsuccessfully to salvage it.

Meanwhile, Iran has begun construction at its underground Natanz enrichment site after a fire and explosion it described as “sabotage” struck its advanced centrifuge assembly plant in July.

Abrams described the construction as “another Iranian challenge” to the International Atomic Energy Agency, the U.N. agency that Iran still allows to monitor its nuclear sites. He also criticized Iran for its slow response in allowing the IAEA to investigate a suspicious site outside of Tehran where it discovered particles of uranium of man-made origin.

Iran long has insisted its nuclear program is for peaceful purposes. However, the IAEA has said Iran “carried out activities relevant to the development of a nuclear explosive device” in a “structured program” through the end of 2003.

“I hope that next year the leverage that we’ve built up through our sanctions program is used (with) any form of pressure including, for example, Iranian fears about a developing relationship between Israel and Arab states in the region,” he said. “All of this pressure should be brought to bear to get Iran to change its conduct.”

In the 1980s, during the Reagan administration, Abrams worked in the State Department and convinced the sultan of Brunei to deposit $10 million in a White House-controlled Swiss bank account to aid Nicaragua’s Contra rebels despite a Congressional ban. But the White House later put the money into the wrong account in a clerical error, as investigators later discovered.