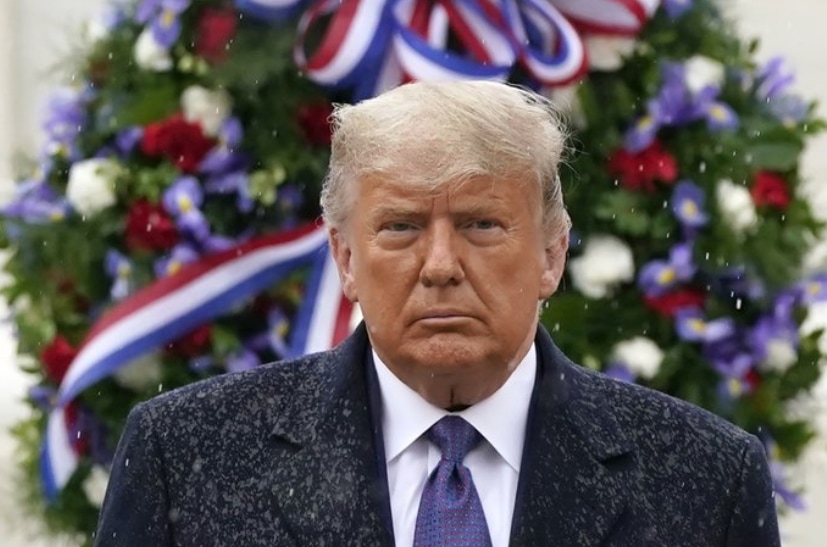 Public health experts worry Trump’s refusal to take aggressive action on the pandemic or to coordinate with the Biden team will only worsen the effects of the virus.

President Donald Trump has publicly disengaged from the battle against the coronavirus at a moment when the disease is tearing across the United States at an alarming pace.

Trump, fresh off his reelection loss to President-elect Joe Biden, remains angry that an announcement about progress in developing a vaccine for the disease came after Election Day. And aides say the president has shown little interest in the growing crisis even as new confirmed cases are skyrocketing and hospitals intensive care units in parts of the country are nearing capacity.

Public health experts worry that Trump’s refusal to take aggressive action on the pandemic or to coordinate with the Biden team during the final two months of his presidency will only worsen the effects of the virus and hinder the nation’s ability to swiftly distribute a vaccine next year.

The White House coronavirus task force held its first post-election meeting Monday. Officials discussed the rising case numbers, the promise of a vaccine in development by Pfizer, and recognized the service of Navy Rear Adm. John Polowczyk, a member of the task force who retired Monday.

But Trump, who does not take part in the task force meetings, remains preoccupied with last week’s election results. He has yet to weigh in on the recent spike in virus cases that has state and local officials scrambling, and hospitals concerned about their ability to treat those stricken.

With more than 100,000 new confirmed U.S. cases reported daily for more than a week, Trump has been more focused on tracking the rollout of a vaccine, which won’t be widely available for months. He has fumed that Pfizer intentionally withheld an announcement about progress on its vaccine trial until after Election Day, according to a White House official who spoke on condition of anonymity because they were not authorized to publicly comment. Pfizer said it did not purposely withhold trial results.

Though the president has consistently played down the pandemic, which has killed more than 240,000 Americans and infected more than 10 million people in the U.S., public health experts expressed worry about Trump’s silence on the troubling spike in cases, as well as his refusal to begin coordination on virus issues with Biden’s transition team.

“It’s a big problem,” said Dr. Abraar Karan, a global health specialist at Brigham and Women’s Hospital and Harvard Medical School. “The transition is not going to happen until January and we are in a complete crisis right now. We already know where this is headed. … It’s not good enough to say we’re going to wait until the next president to address this.”

The president’s silence comes as as numerous White House and campaign officials have tested positive for the virus in recent days.

Meanwhile, state and local officials around the country are scrambling in the midst of mounting caseloads. While Trump stays silent, they are urging their residents to step up mask-wearing and social distancing, as they brace for what many epidemiologists worry is the beginning of tumultuous period.

In New York, Gov. Andrew Cuomo has issued an order starting Friday for bars, restaurants, and gyms to be closed by 10 p.m., and has set a cap of 10 people for private gatherings. In Illinois, public health officials asked employers to allow their personnel to work from home when possible and urged residents to stay at home as much as possible and skip non-essential travel.

In Iowa, Republican Gov. Kim Reynolds, who resisted coronavirus restrictions, announced earlier this week that masks will now be required at indoor events of more than 25 people, and she banned outside events of 100 or more people unless all attendees wear masks.

Trump hasn’t answered questions since before Election Day. That hasn’t slowed his Twitter habit, but he’s used it almost exclusively in recent days to rage over the election results and spread unsubstantiated allegations of voter fraud.

By late Thursday afternoon, Trump had tweeted or retweeted more than three dozen times that day. Just one was related to the virus — a retweet of a posting by Sen. David Perdue about Georgia receiving 2,000 vials of a new antibody treatment.

“The president is regularly briefed about the coronavirus,” said White House spokeswoman Sarah Matthews. “The relevant information is brought to him on the big decisions, and then he moves forward in the way that’s best for our country.”

In the closing days of the campaign, Trump sought to reassure Americans that the country was “rounding the corner” on the virus and he wrongly predicted that Democrats’ focus on the disease would go away right after the election. The president pushed a sunny public tone even after he tested positive for the virus in early October and was hospitalized for three days after contracting the virus. His wife, Melania, and teenage son, Barron, also contracted the virus.

Biden, for his part, largely framed the election as a referendum on Trump’s handling of the pandemic. He has made addressing the virus his top priority as he moves forward with his transition. He spoke by phone Thursday with House Speaker Nancy Pelosi and Senate Minority Leader Chuck Schumer about the intensifying pandemic and prospects for passage of a COVID-19 relief bill in the lame duck session of Congress.

Biden and Vice President-elect Kamala Harris met virtually with his new coronavirus advisers this week, and Biden delivered remarks warning Americans that ”the challenge before us right now is still immense and growing.”

“We could save tens of thousands of lives if everyone would just wear a mask for the next few months. Not Democratic or Republican lives, American lives,” Biden said in a speech this week. “Please, I implore you, wear a mask.”

Lawrence Gostin, a public health expert at Georgetown University’s law school, said Biden will only be able to “scratch the surface” of tackling a pandemic that could be a “raging forest fire” by the time he takes office on Jan. 20.

He added that even the good news on Pfizer’s development of a vaccine that showed 90% efficacy in early trial results could be diminished if Trump doesn’t begin coordination efforts with Biden’s team on how to roll out the vaccine. Some public health experts believe the task of persuading Americans to take the vaccine and widely distributing it could be as complicated as the vaccine’s development.

“I fear the next three months ahead could be the worst we’ve faced during the pandemic,” Gostin said. “America is like a ship at storm and the captain has decided to go play golf.”

previousLast Call for 11.12.20 — A prime-time read of what’s going down in Florida politics