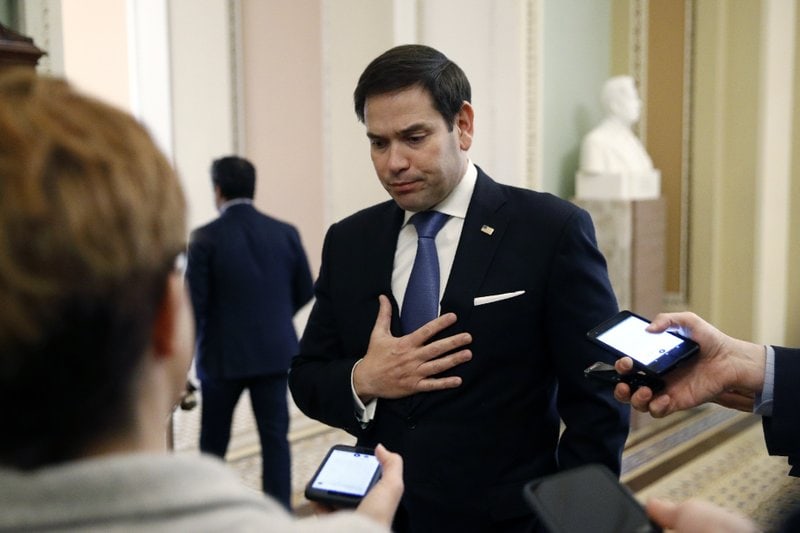 A doctored photo shows an Australian soldier with a bloody knife to a girl's throat.

After a Chinese diplomat tweeted a photoshopped image of an Australian soldier knifing an Afghani girl, U.S. Senator Marco Rubio is wondering why it’s still online.

Rubio, a Republican in his second term, slammed Twitter and CEO Jack Dorsey for an unwillingness to confront the Beijing regime.

“Shocked by [the] murder of Afghan civilians & prisoners by Australian soldiers. We strongly condemn such acts, & call for holding them accountable,” tweeted Zhao Lijian, a leading bureaucrat in China’s so-called Information Department.

Zhao has pinned the tweet, amid a hue and cry from Australian and American conservatives about the graphic and false image being up.

For Rubio, who has made confrontation with China a major part of his Senate persona, the outrage offers an opportunity to reprise increasingly familiar concerns about big tech and its ability to game the geopolitical debate.

In a letter to Dorsey, Rubio notes the difference in how the medium handles provocations from Beijing and how it frames President Donald Trump‘s often less-than-factual tweets.

“Twitter has had more than 36 hours to identify, investigate, and evaluate a tweet sent by Zhao Lijian, the deputy director-general of China’s Information Department, that contains a doctored image that depicts a violent act that may, in turn, inspire other violent acts,” wrote Rubio. “It defies belief that Twitter is unaware of the image, which falsely portrays an Australian soldier holding a bloody knife to the throat of a young Afghan child, as Australia’s Prime Minister Scott Morrison requested the image be taken down.”

Rubio contends Twitter “made an intentional decision not to remove the tweet or even issue a warning label.”

“We know your company has the ability to move rapidly, as it frequently issued warning labels on tweets of prominent Americans during the election — sometimes within minutes of a tweet being sent,” Rubio remarked, noting an “inconsistency” that may threaten Section 230 protections that alleviate social media of the responsibilities publishers bear as owners of the content.

Rubio asked questions, which Twitter has no obligation to answer, about the review process and the platform’s future.

“Does Twitter want to operate in China in the future? And if so, has it had any conversations with relevant officials or entities in China?”

“The American people increasingly see mainstream social media, especially Twitter, as little more than a liberal echo chamber inclined to censor conservatives. I share their concern, especially when enemies of America are allowed to post falsified and dangerously misleading images with no consequence,” Rubio asserted.

The Senator has contended that “egregious instances of censorship & partisan content moderation by social media companies like Twitter and Facebook are brazen attempts to twist & manipulate America’s public square.” Moreover, “once nascent, scrappy internet companies that benefited from the protections afforded by Section 230 of the Communications Decency Act have become Goliaths intent on twisting and manipulating America’s public square to their liking.”

Apparently, that manipulation holds true beyond the nation’s borders, and the Senator’s implicit question to Dorsey boils down to, whose side are you on?