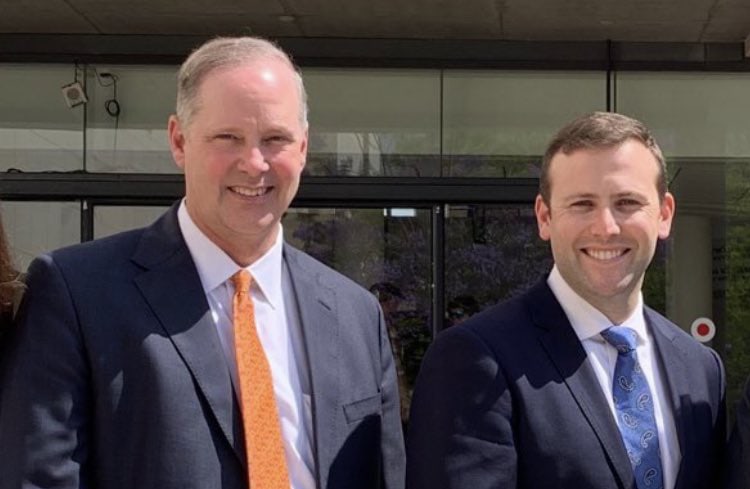 The past year saw no shortage of political red meat for both the savvy and the outsider. The 2020 cycle saw one local lawmaker ousted from her seat in the Florida Legislature. There were major upsets on the Hillsborough County School Board. Hillsborough County Democrats had a banner year despite massive losses elsewhere.

Heading into 2021, lessons from the path offer a glimpse into who, and what, to watch in the new year.

Here’s a rundown of the Tampa Bay area biggest newsmakers to watch.

After two years plagued by scandal, Florida’s 15th Congressional District will have new representation. Scarred by a campaign finance screw up that never went away, U.S. Rep. Ross Spano lost to Franklin in the August primary. Franklin went on to defeat Democrat Alan Cohn in the November General Election and will take office next month. It should be a welcomed change in leadership for residents of the Lakeland-centered district, whether a Republican or a Democrat. Spano’s illegal loans to his campaign prompted a federal investigation and ultimately made him an easy target to unseat. The question now remains: What will Franklin do with his position now that he enters an office that was largely ineffective under the weight of scandal for the past two years. Whatever it is, it’s got to be better than what it was.

The Tampa Bay area stands to come out better than other regions this year with both of the top leadership posts in the Legislature filled by local lawmakers. As House Speaker, Sprowls will wield considerable influence over budget priorities in 2021 as House members grapple with how to pare down the state budget amid a cash strapped state troubled by nearly a year of economic downturn. With Sprowls at the gavel, Tampa Bay projects that might have gotten the ax could survive, though likely not all of them. Sprowls has already but the Tampa Bay area at center stage with his work as incoming Speaker this year to lead Republicans to a banner election year. Under his leadership, the GOP claimed five new seats in the chamber, a huge victory considering Democrats were hoping to ride a blue wave to diminish Republicans’ majority in the House.

Like Sprowls, Simpson will wield the gavel in the Senate for the next two Legislative Sessions. And also like Sprowls, he hails from the Tampa Bay region. Simpson offers a moderating voice in the upper chamber, which for years has passed on some of the more hyper-conservative issues originating from the House. That’s already on display with Simpson taking a stricter approach to COVID-19 precautions in his chamber compared to those implemented in the House ahead of the 2021 session. Still, Sprowls and Simpson have already shown an effective working relationship, one that will bode well in a tough budget year as lawmakers grapple with how to shed billions.

After losing her reelection campaign in November to Republican Linda Chaney, Webb won’t be making news from the Capitol this year. But that doesn’t mean she will fade into oblivion. Her defeat came as a shock to some, though not to all. She fell victim to what became a banner election cycle for the Florida GOP and was one of five Democrats to lose their seat this cycle. Webb has already hinted that she has a next step in mind. Whether that’s running for her former House District 69 seat again in 2022 or a bid for some other office, expect 2021 to bring with it first speculation followed by, at some point, Webb’s announcement about what that next step might be.

Chaney pulled off a major upset in defeating Webb, a victory only savored briefly before officially taking office last month. She enters the Legislature as a freshman lawmaker tasked with navigating the toughest budget challenges the state has seen since the Great Recession. Constituents will be watching as Chaney shows whether she’s able to bring home the bacon for her Southwest Pinellas County district. Her campaign this year was light on priority details, meaning constituents will also be watching her votes.

Elected to Florida House District 59 to replace fellow Democrat Adam Hattersley, Learned is tasked with representing a purple district whose politics run the full gambit of the political spectrum. That shouldn’t be too hard for Learned to navigate. He’s about as centrist as they come. However, his district was in the GOP crosshairs in 2020 and will likely be there again in 2022. As a freshman lawmaker, the 2021 session will serve as the first taste voters get of Learned in action. He’ll have plenty of space to build his name. While no House Democrats were named to leadership positions for the next two sessions, Learned landed a healthy five committee posts including the Judiciary committee and its Criminal Justice and Public Safety subcommittee and the Justice Appropriations subcommittee, which means he’ll have a say, and a vote, on legislation related to criminal justice reform. He also sits on the Early Learning and Elementary Education subcommittee, which will likely face issues related to challenges schools faced, and continue to face, with education in a pandemic. Finally, Learned has a seat on the Joint Legislative Auditing committee where he’ll have a vote alongside members of the upper chamber on broad issues pertaining to government operations.

While Democrats took a beating this year statewide, Hillsborough County Democrats under Townsend’s leadership as party chair performed well. With Nancy Millan’s election to Hillsborough County Tax Collector, Democrats now control all but one of the county’s constitutional offices. Sheriff Chad Chronister is the only Republican to hold countywide constitutional office. Democrats also grew their majority on the County Commission from 4-3 to 5-2 with the election of former Tampa City Council member Harry Cohen and the reelection of Commissioner Pat Kemp. Townsend is taking those victories to her own race to head the Florida Democratic Party where current Chair Terrie Rizzo is not seeking reelection. She’ll have an uphill climb to beat Manny Diaz who so far appears to have establishment support for the post. But Hillsborough County is a microcosm of the state, with rural areas and suburbs offering challenges to Democrats. She showed those challenges can be overcome and will likely make that case as she campaigns for FDP chair.

Wengay Newton (along with Ken Welch and Darden Rice)

Newton announced in mid-December that he would run for St. Petersburg Mayor in 2021 to replace Democrat Rick Kriseman who is leaving office due to term limits. The race will be a must watch in St. Pete politics heading into the New Year, but Newton brings an extra zest to the race with his willingness to often say what others won’t. More than that, he puts an interesting kink in what is so far a three-way race between all Democrats (a Republican will likely emerge soon.) Newton face former Pinellas County Commissioner Welch and St. Pete City Council member Rice. Prior to Newton’s entrance into the race, Rice had been courting conservative financial donors from the same circle former Mayor Rick Baker, a Republican, tapped when he ran against Kriseman four years ago. It was a smart strategy that positioned Rice to capitalize not only on he progressive bonafides built over years of public service, but from more conservative voters who could put her over the top in a General Election. However, Newton is no stranger to the Baker circle. He backed Baker in 2017 and has maintained those relationships. While anything could happen this early in the process, Newton’s entrance into the race could be leaving Welch with a hint of optimism as the possibility looms that Newton and Rice could split the vote in next year’s Primary Election.

The year 2020 saw significant upheaval on the Hillsborough County School Board. Fueled largely by deep division on the issue of closing schools or reopening them later, voters sent a stern message to board members, unseating two of three incumbents on the ballot. Tamara Shamburger lost to Henry “Shake” Washington while Steve Cona III lost his seat to Nadia Combs. The next year will see a school board with three new faces (Jessica Vaughn won an open race) grapple with major challenges as the district faces a budget crisis fueled both by mismanagement of funds and sky high costs incurred during the COVID-19 crisis. How they handle it could set the stage for another raucous election cycle in 2022.

Nurse shook up Pinellas County politics this year in a race that’s usually a sleepy affair. He ran for School Board in District 7, the county’s only minority-leaning district and the only to ever have been lead by a Black board member. Nurse, who is White, ran to replace Rene Flowers who didn’t seek reelection to run fo Pinellas County Commission, a race in which she ultimately won. All of the other candidates in the race were Black. His race stirred debate about the importance of minority representation on elected boards. His defeat leaves an open question about Nurse’s future in local politics. On one hand, the former St. Petersburg City Council member could receded into oblivion, scarred by the controversy his bid, which had it been successful would have meant an all White School Board. On the other, he could be looking for his next move. While his race this year angered many in the minority community, Nurse has long been a staple of progressive politics in the area.

previousU.K. approves use of second COVID-19 vaccine with easier storage