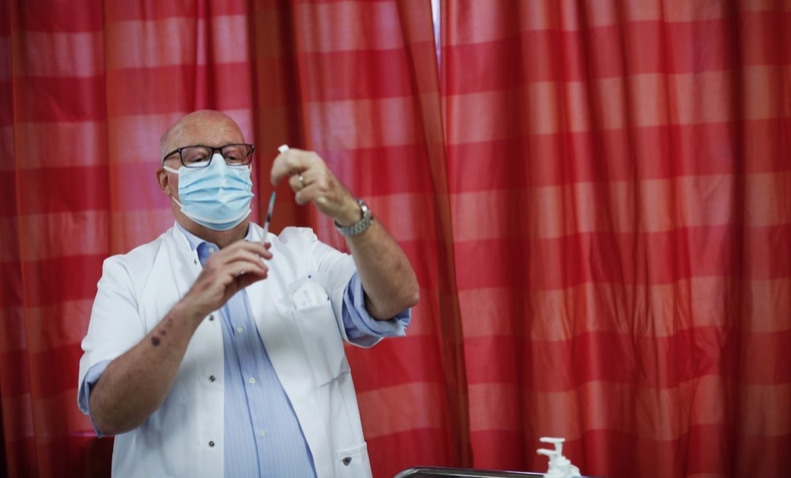 By the end of the week, all county health departments will have access to the vaccine.

People in Florida aged 65 and older are beginning to receive COVID-19 vaccines in Florida, making the Sunshine State the first to offer immunizations to older people in the general population.

During a Wednesday news conference and shot demonstration in Delray Beach, Gov. Ron DeSantis outlined the state’s latest effort to administer the vaccine to the age group most at risk for COVID-19 complications and potentially severe outcomes. Florida has broken ranks with the U.S. Centers for Disease Control and Prevention, which recommended but did not require that the latest round of shots go to essential workers and those aged 75 and older.

“You have people who are in the Greatest Generation; you have people who fought in World War II, survived the Holocaust. These are people that we’ve got to stand with and prioritize,” DeSantis said. “Today, we’re seeing that prioritization in practice.”

While some elected officials have already been vaccinated, DeSantis also reiterated that he would wait until the state makes the vaccine available to his age cohort.

“I want my parents, our grandparents, to be able to get it,” he said. “Granted, I’m an elected official, but whoop-de-do. At the end of the day, let’s focus on where the risk is.”

Members of the general public 65 and older can sign up to receive the vaccine through their county health departments.

By the end of the week, all remaining county health departments that have not already received vaccines will receive a combined 93,900 doses, the Governor’s Office announced Tuesday. The vaccine is already available in Palm Beach, Miami-Dade, Lee, Escambia, Leon, Duval, Orange and Seminole counties.

Each week, the federal government tells the state how many doses it will receive the following week. The state then indicates where to send those vaccines, which are shipped straight from the distribution chain.

“It cuts out the middleman,” DeSantis said. “We obviously are determining where that’s going, and we’re basically just trying to figure out how this can be the best force-multiplier.”

Two weeks ago, Florida was also the first state to vaccinate people living and working in long-term care facilities.

While demand for the vaccine currently outweighs supply, he encouraged everyone who has access to a shot to get immunized. At King’s Point, assuaging concerns regarding possible vaccine side effects included a lollipop incentive.

“The facts should be out there,” DeSantis said. “The fact is there have been very, very few problems with the vaccine throughout the country and the state of Florida.”

In Florida and across the country, health officials are reporting a growing number of virus outbreaks. New cases are expected to climb in the aftermath of the holidays.

But encouraging the Governor is that even the first dose of the two-dose vaccine offers some protection to those who receive it.

“You need the booster to make it as strong as the trials showed, but that is a good thing to say that if you go through the nursing homes and you give the one dose, in the intervening time, they’re going to be more protected than they were before they had that one dose.”

“The battle is not over. There is a light at the end of the tunnel,” he said. “We are all very excited, we’re all very pleased with having access to this vaccine and the efficacy of the vaccine, but I also need as the county mayor to remind our constituents that with the holidays, there is an increase in the positivity rate.”