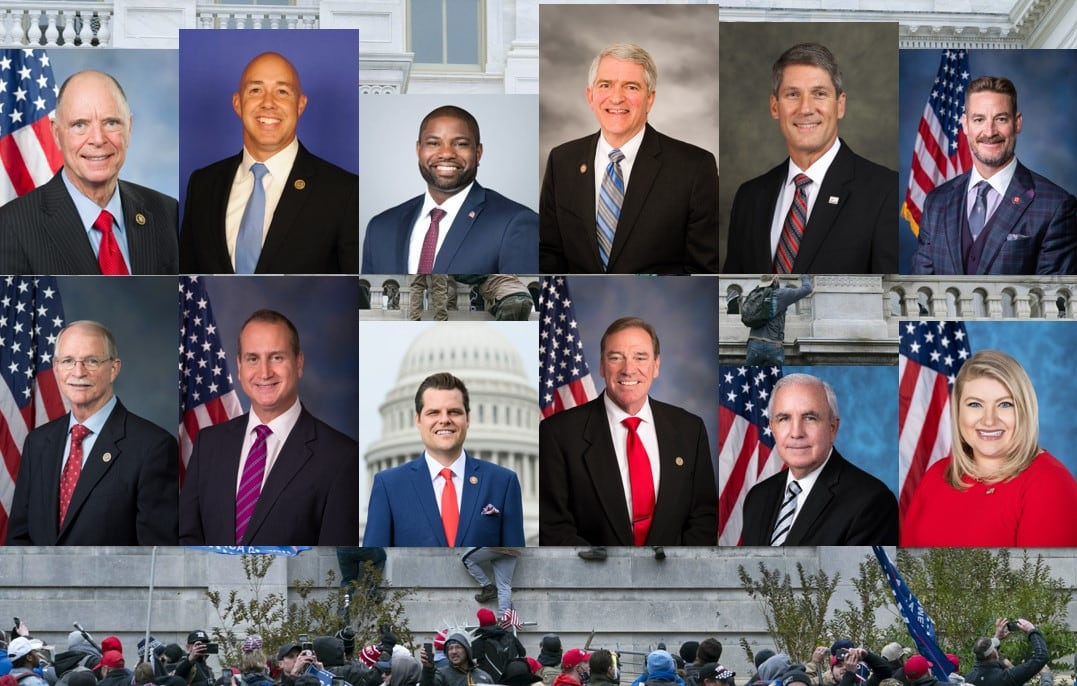 All Democrats in Florida’s congressional delegation voted to certify all electoral votes submitted by states. But most of Florida’s Republican Representatives voted no on certifying slates of electors for both Arizona and Pennsylvania.

Three members of Florida’s delegation could not attend the certification of the Electoral College. COVID-19 sidelined Republican Reps. Gus Bilirakis and Maria Salazar, and Democratic Rep. Alcee Hastings, who is being treated for pancreatic cancer, also missed the vote.

The votes closed the end to a chaotic series of events for what’s normally a clerical function of Congress. During the debate over objection to Arizona’s vote, rioters breached the Capitol resulting in one protester’s death and 53 arrests. It disrupted the certification of votes for several hours. That came after Trump, in a speech in front of the White House, directed supporters to go to the Capitol.

The series of events prompted one Florida Congressman, Rep. Michael Waltz, to change how he planned to vote on certifying the election results.

“Objecting was supposed to serve as a forum to peacefully debate among my colleagues and raise these serious issues that deserve scrutiny,” Waltz said. “However, with today’s despicable display of violence and intimidation on Capitol Hill, we must move on to ensure a peaceful transfer of power and certify the presidential election.”

Rep. Vern Buchanan, of Sarasota, was the only other Florida Republican present in the House to vote in favor of certifying the election results. He issued a statement condemning the riots.

“The powder keg of discontent has been brewing for months following a close presidential election,” Buchanan said. “Millions of Americans expressed legitimate concern over voting procedures that were changed by several states. Those voters, many in my district, certainly had good reason to be alarmed and concerned. But after witnessing the sad spectacle that occurred today, I voted to certify the results of the Electoral College because it’s time to move past this election.”

Other Republicans condemned the violence but held to plans to vote down electors in every state where a Senator joined with a challenge.

“The people who invaded Capitol Hill today do not embody my constituents’ values and heart, and they will not alter my decision to object to the Electoral College certification,” Donalds tweeted before the vote.

In addition to impacting how some House members voted, the riots appeared to alter the course of Senate objectors dramatically. More than a dozen senators initially intended to participate in challenges for at least a half-dozen states. But when riots disrupted the first debates on Arizona, Senators who had agreed to join in challenges pulled out of most. Ultimately, Missouri Sen. Josh Hawley joined with a challenge to Pennsylvania’s electors.

Florida’s two Republican senators split on one of the states, but both voted to certify enough electors to guarantee Biden won. Sen. Marco Rubio voted to certify all states’ electors. Sen. Rick Scott voted to challenge Pennsylvania but not Arizona or any other state. There was no formal debate held on Pennsylvania, and Rubio gave a speech after the riots condemning the undemocratic actions.

Rep. Ted Deutch, a Boca Raton Democrat, said the right side prevailed despite the chaos sewn.

“The end of a long, hard day,” he tweeted around 4 a.m. Thursday. “We would not be prevented from doing our job. Neither the President nor his enablers or violent supporters could delay democracy’s march forward. Joe Biden and Kamala Harris will soon be President and Vice President. Because they won the election.”

nextDonald Trump says his term is ending, transition will be orderly