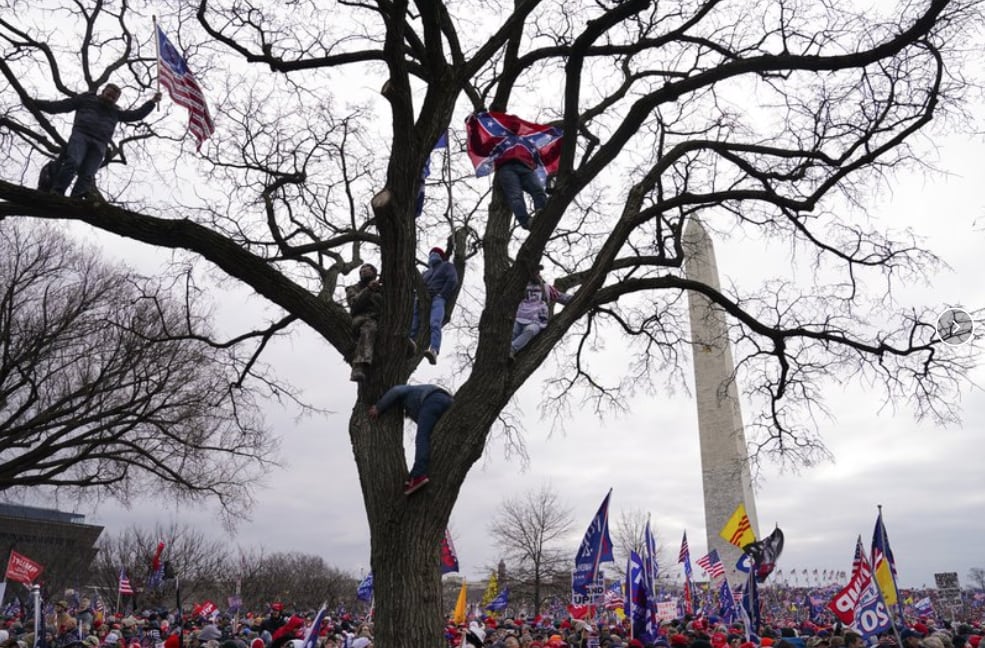 Amid the American flags and Trump 2020 posters at the U.S. Capitol during last week’s insurrection were far more sinister symbols:

A man walking the halls of Congress carrying a Confederate flag.

A makeshift noose and gallows ominously erected outside.

In many ways this hate-filled display was the culmination of many others over the past few years, including the deadly 2017 “Unite the Right” rally in Charlottesville, Virginia, that gathered extremist factions from across the country under a single banner.

Extremist groups, including the pro-Trump, far-right, anti-government Oath Keepers and the Three Percenters, a loose anti-government network that’s part of the militia movement, were among those descending on the halls of power on Jan. 6.

The hateful imagery included an anti-Semitic “Camp Auschwitz” sweatshirt created years ago by white supremacists, who sold them on the now-defunct website Aryanwear, said Aryeh Tuchman, associate director for the Anti-Defamation League’s Center on Extremism.

“Anyone who flies a Confederate flag, even if they claim it’s about heritage and not hate, we need to understand that it is a symbol of white supremacy,” Tuchman said.

Brooks said it was also important to note the demographics of the riotous crowd, which was overwhelmingly white. Within that context, even more traditional symbols of American patriotism, like the American flag, or political preference, like Trump 2020 signs, served to give the symbols of hate a pass.

The proliferation of white supremacist symbolism has a long history, with two clear peaks in the civil rights efforts following Reconstruction and during the civil rights movement of the 1950s and 1960s, Brooks said. Now, as the U.S. reckons with systemic racism following the police killing of George Floyd, she said Confederate symbols have been displayed more prominently, including at smaller-scale white supremacist rallies and by counterprotesters carrying Confederate flags at Black Lives Matter gatherings across the country.

“This is a response, and it’s not a new response,” Brooks said. “Every time there is progress in asserting civil rights, there’s a backlash. Confederate iconography is a means to reassert white supremacy when it is thought to be threatened.”

“This merging of groups you see in Charlottesville and that you saw at the Capitol last week doesn’t usually happen,” she said. “But they’re desperate. They are convinced that they’re this grave minority that is being threatened and needs to stick together and rally under the moniker of hatred.”

Karen Cox, a historian of the American South and Confederate symbols, said the phenomenon echoes the so-called “Lost Cause” mythology, the pseudo-historical ideology that the cause of the Confederacy during the Civil War was just and heroic — an assertion that lives on in the hearts of many who tote the Confederate flag today.

She said for many extremists, including those present at the Capitol insurrection, President Donald Trump’s election loss has become a new “Lost Cause” of sorts.

“This is their new ‘Lost Cause’ and a continuation of the original ‘Lost Cause,’” she said. “They’ve lost, but they hold onto that (Confederate) flag to show that they still feel justified.”

“Same thing here. ‘We lost this election, but our cause was just.’ And as long as they still hold onto this ‘Lost Cause,’ these symbols aren’t going away.”

“We are 150 years after the Civil War and people are still waving that flag,” Cox added. “This has been here for so long, it’s going to take a long time to go away — if it can.”

As rioters besieged Capitol Hill, demonstrations flared at statehouses across the country. An internal FBI bulletin has warned of plans for armed protests at all 50 state capitals and in Washington D.C., in the days leading up to President-elect Joe Biden’s inauguration.

Brooks said she worries the rampage at the Capitol and proliferation of white supremacist symbols will encourage similar actions at state capitals.

“The insurrection last week helped embolden and radicalize people in such a way that it’s going to be even more threatening,” she said. “This risk of an insurrection like this happening again is hanging over us.”

Democratic Congressman Jamie Raskin of Maryland was inside the Capitol building as the violent mob made its way inside. Raskin, who is Jewish, chairs the Subcommittee on Civil Rights and Civil Liberties in Congress and has sat through multiple hearings about the dangers of violent white supremacy. He said he was shocked by the “open manifestations of pro-racist and pro-Nazi ideology.”

“This massive attack on the Capitol and invasion of the Congress would be shocking and criminal enough even if these people had no racist or anti-Semitic intent at all,” he said. “But when you add in the elements of violent white extremism, you can see how profoundly dangerous this is to the future of our country.”

Tuchman said he is encouraged by the disgust many Americans have expressed and hopes it will make such symbols less publicly acceptable. But he said these images hold a power that may continue to menace the nation’s democracy.

“Images can encapsulate the beliefs of extremist movements,” he said. “They can popularize them. … Symbols can be the entryway into extremism and radicalization.”

nextOne supports Biden, other loyal to Trump; they bet $100, but Trump supporter won’t pay up.