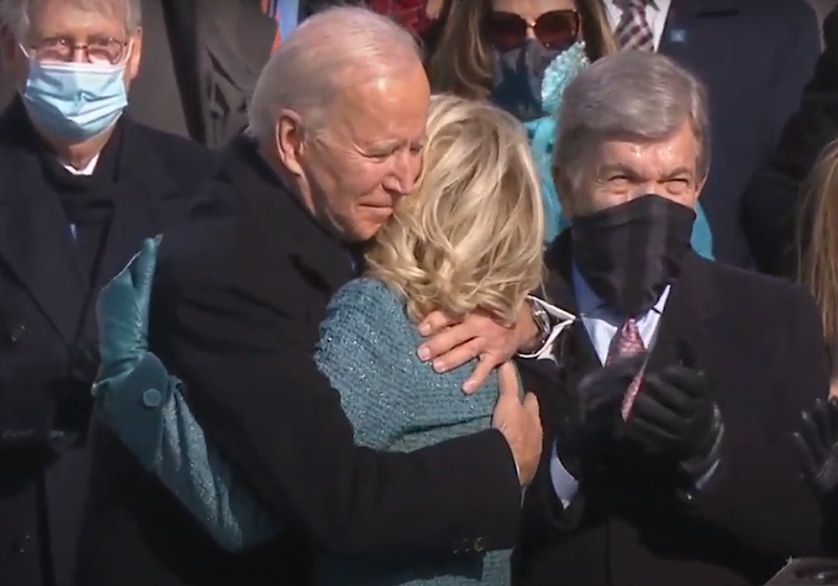 In his call for American unity, Biden urges end to 'this uncivil war.'

Joe Biden was sworn in as the 46th President of the United States Wednesday just before noon and then declared it to be “democracy’s day.”

“At this hour, my friends, democracy has prevailed.”

Moments earlier, Kamala Harris made history when she was sworn in as the first woman Vice President, and the first African American and Southeast Asian.

Biden delivered on his promised call for national unity, though he did not hesitate to define America’s problems in terms that threw unsaid aspersions at his predecessor, former President Donald Trump, who refused to have anything to do with the inauguration.

His opening references to the challenges and triumph of democracy was a hardly-veiled interpretation of what had rolled out over previous months, as Trump refused to accept the results of the 2020 presidential election and on Jan. 6 seemed to inspire an insurrection at the U.S. Capitol as Congress endeavored to certify Biden’s election.

Biden acknowledged the presence of former Presidents Bill Clinton, George W. Bush, and Barack Obama, at the ceremony, and the well wishes of former President Jimmy Carter who could not come because of his fragile health. Yet he did the same for Trump as Trump had for him. Biden didn’t mention him. At least not in any direct terms.

Biden spoke of divisions that must be healed. He spoke of the need and value of truth and warned against “lies told for power and for profit.”

He spoke of a need to end what he called “this uncivil war” between Americans, that pits red against blue, rural versus urban, and conservative versus liberal.

Biden spoke of the need to push away racism, nativism, fear, and demonism. He said the forces that divide Americans “are deep, and they are real,” but said “our better angels have always prevailed.”

“The cry for survival comes from the planet itself, a cry that can’t be any more desperate or any more clear now,” Biden said. “A rise of political extremism, white supremacy, domestic terrorism that we must confront, and we will defeat.”

He urged Americans to stop shouting, lower the temperature, hear one another, show respect to one another, to treat each other not as adversaries but as neighbors.

He called for greatness and goodness to guide America, along with decency and dignity, love and healing.

“May this be the story that guides us, the story that inspires us and the story that tells ages yet to come: that we answered the call of history, we met the moment. Democracy and hope, truth and justice did not die on our watch, but thrived, that America secured liberty at home and stood once again as a beacon to the world,” he said. “That is what we owe our forebears, one another, and generations to follow.”

He spoke of faith and where it can take America.

“This is a great nation. We’re good people,” he said. “And over the centuries through storm and strife, in peace and at war, we’ve come so far. But we still have far to go. We’ll press forward with speed and urgency for we have much to do in this winter of peril and significant possibilities.

He pledged that his whole soul was in the effort to unite America, just as President Abraham Lincoln had vowed in 1863 when he signed the Emancipation Proclamation.

“And I ask every American to join me in this cause. Uniting to fight the foes we face: anger, resentment, hatred, extremism, lawlessness, violence, disease, joblessness and hopelessness,” Biden said.

“We can right wrong. We can put people to work in good jobs. We can teach our children in safe schools. We can overcome the deadly virus. We can reward work and rebuild the middle class and make health care secure for all. We can deliver racial justice and we can make America once again the leading force for good in the world,” Biden said.

His first act as President was to call for a moment of silence for those who already have died from COVID-19, something Trump struggled against acknowledging, let alone memorializing.

“I’d like to ask you to join me in a moment of silent prayer to remember all those who we lost this past year to the pandemic. Those 400,000 fellow Americans. Moms, dads, husbands, wives, sons, daughters, friends, neighbors and co-workers. We will honor them by becoming the people and the nation we know we can and should be,” Biden said.

nextSenate committee to take up COVID-19 liability protections for businesses