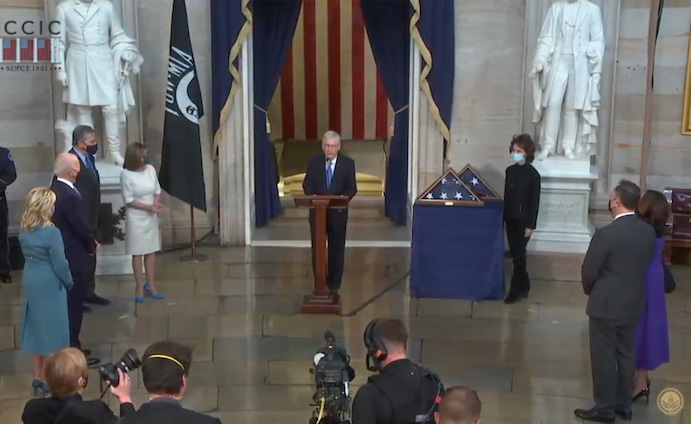 Mitch McConnell and Nancy Pelosi presented flags to the new POTUS and VP.

Senate Republican Leader Mitch McConnell invoked a rivalry between chambers, not between parties. He pointed out to Democratic House Speaker Nancy Pelosi that Biden and Harris are “a son and daughter of the Senate,” who skipped serving in the House of Representatives.

Pelosi responded that while McConnell might have two former colleagues becoming President and Vice President, tradition bestowed McConnell with the honor of presenting a flag to Harris that flew over the Capitol while she was being sworn in, while “I have the privilege of giving the flag to the President of the United States.”

“This flag, may it reflect all that is said about your inauguration, America United. May it be a symbol of the hope, the feeling, and all the enthusiasm you have for this country,” she said.

Pelosi then essentially said it’s time to get to work, noting that at baseball games the National Anthem is followed by the call, “play ball! So we’re going to get ready to play ball, we’re ready to go, with the inspiration of our flag flying.”

Might the Biden administration’s relationship with Congress be so simple, with Republican lawmakers such as McConnell welcoming him and Harris as former colleagues and with a little humor, rather than as partisan enemies?

“I listened to your speech today,” McCarthy said. “You talked about the tension and the division. Our task as leaders is to bind this nation’s wounds, and dedicate ourselves to the values that all Americans share together.”

McCarthy presented a picture to Harris.

“But we should also remember that this is not the end, but just the beginning,” McCarthy added. “As leaders we are judged not by our words but by our actions. So let’s go forth from here together and accomplish great things for the American people.”

“We are so proud and ready to march with you, President Biden,” Hoyer said.

McConnell, Pelosi, McCarthy, and Hoyer are members, along with Republican Sen. Roy Blunt of Missouri and Democratic Minnesota Sen. Amy Klobuchar of the Joint Congressional Committee on Inaugural Ceremonies. Blunt, the committee’s chair, and Klobuchar emceed the inauguration itself.

previousJoe Biden’s inauguration goes off with no security issues