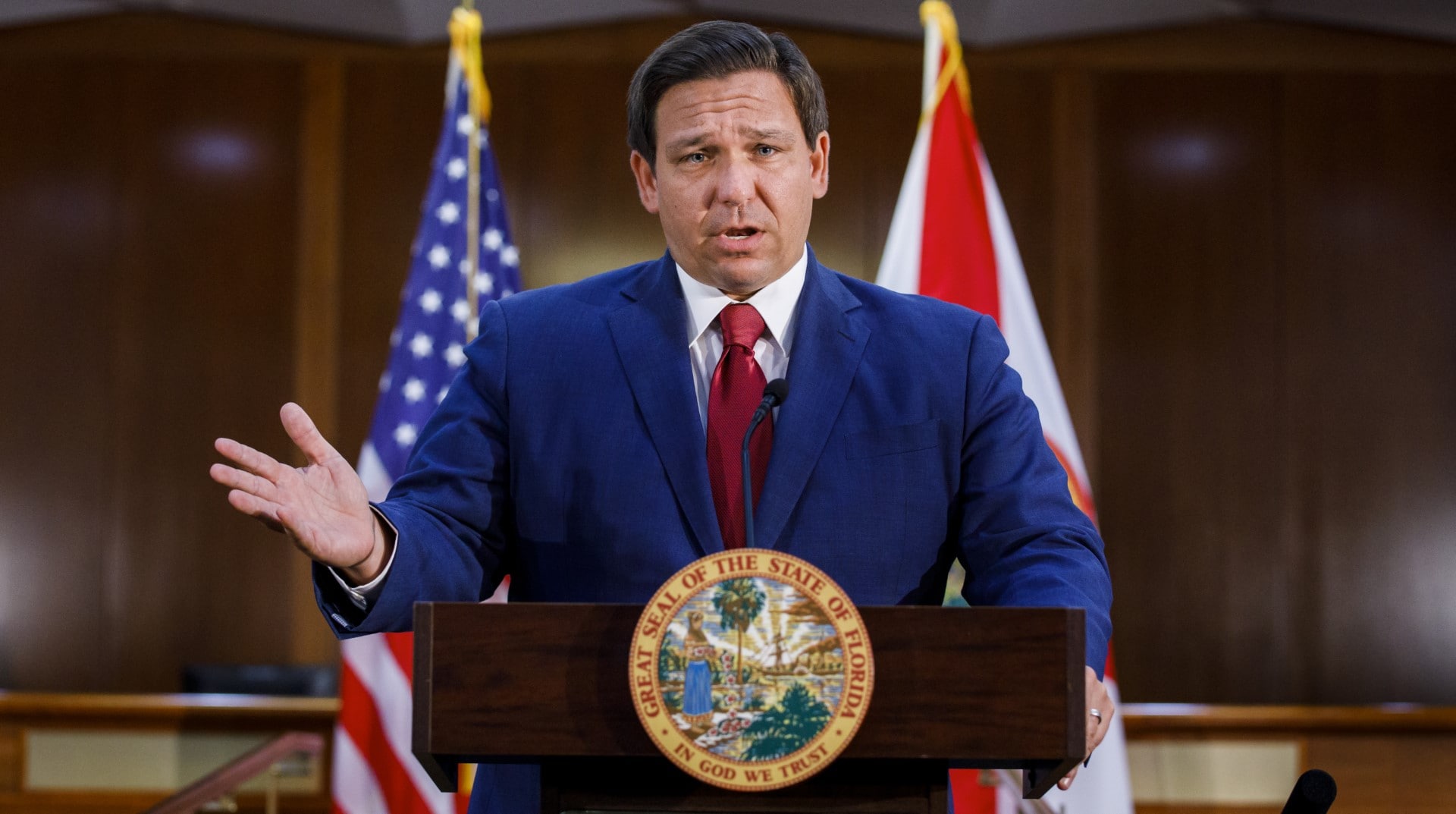 Facing lingering economic woes from the COVID-19 pandemic, Gov. Ron DeSantis revealed his budget recommendations for the next fiscal year.

Despite the pandemic, the Governor said his proposed $96.6 billion budget is $4.3 billion larger than last year’s, $2.6 billion of which is related to the pandemic.

His budget exemplifies strength in continuing to weather the storm of the pandemic, the Governor told reporters from the Cabinet Meeting Room, which has effectively become his briefing room to help meet social distancing guidelines.

“As a state driven by tourism and hospitality, we were staring down the barrel of an unprecedented economic collapse,” DeSantis said.

However, to get Florida to “lead,” the Governor relies heavily on federal programs and relief to help balance his spending.

“Government has a responsibility. They’re one of the reasons why we had all of the budget fallout,” DeSantis said, stemming from the federal about-face in March that asked Americans to stay home.

Administration officials expect the federal government to shoulder all costs from the vaccine rollout from Jan. 21 until September.

In addition to the $2.6 billion in increases related to COVID-19 expenditures, the proposed budget includes $1 billion in reductions compared to last year’s budget. It also puts $6.6 billion in for reserves, including $2.2 billion in unallocated general revenue.

The biggest spending reduction comes from Federal Medical Assistance Percentages, which allowed the Governor to replace $554.7 million for Medicaid and KidCare with federal funds.

Outside of the pandemic response, the budget increased by about 2%, he said.

His budget vetoes in June included $550 million in projects he proposed in his own budget recommendations before that Session. DeSantis cut $1 billion from lawmakers’ budget, approved in March mere weeks after news broke that the pandemic had reached the Sunshine State.

“The notion that the economy would shut down was not something that was being seriously entertained,” DeSantis said of the Legislature’s pre-veto proposal.

The Governor touted the state’s performance during the pandemic, including a lower per capita death toll than the national average and resisting economic lockdowns.

“The pandemic required Florida to lead,” DeSantis said. “We’ve done so, and we’ll continue to do so.”

Despite state economists revising revenue up $1.5 billion from mid-year estimates, the state is still down $2 billion from what was originally expected. Projections from January 2020 showed the state making $34.5 billion this fiscal year, but the Revenue Estimating Conference in December slated the latest projection at $32.5 billion.

Florida experienced strong growth rates in sales tax, doc stamp tax and tourism over the summer, but not enough to offset losses from the first months of the pandemic. Revenue plunged 6.1% in the 2019-20 fiscal year, which even the strong growth since hasn’t negated, the Legislature’s budget expert told senators earlier this month.

During the December Revenue Estimating Conference, the Governor’s Office’s economist pushed for an overall budget that was $1.66 billion higher than the Legislature’s budget expert’s, which would have given DeSantis more flexibility with his. Conflict over projected income from corporate taxes led to a heated exchange and forced the conference to extend the meeting an extra day.

Senate President Wilton Simpson warned during the Legislature’s Organization Session in November that budget cuts will be necessary in the upcoming year. But he also said lawmakers would look to increase revenue without raising taxes.

Because Florida has outpaced recent month-to-month projections, DeSantis said the Legislature will likely have an additional hundreds of millions of dollars to play with.

“None of those increases are even included in our budget,” DeSantis said.

“All that means is that some future Legislature gets to come in and really backfill and fix things that may have happened in the past where we’ve had to cut things,” the Lakeland Republican told reporters earlier this month.

House Appropriations Chairman Jay Trumbull, a Panama City Republican, told his committee earlier this month to expect budget cuts and warned not to rely on federal assistance for a bailout. The Governor’s budget takes a similar position.

“We assumed that there’s just not going to be anything else, and I think that’s the appropriate thing,” DeSantis said.

“It has been a very difficult year and there have been many changes since the last time we were at this point in the budget process, so the President certainly has great respect and appreciation for the tremendous amount of work and the many difficult decisions went in to preparing these recommendations,” said Simpson’s spokeswoman, Katie Betta.

“I’ve been in meetings all morning and haven’t had an opportunity to review,” House Speaker Chris Sprowls said in a noon online press conference.

“We’re happy to take the Governor’s input and his recommendations, vet that through the committee process and build it into the puzzle that is our … state budget,” he continued.

Agriculture Commissioner Nikki Fried, Florida’s lone statewide-elected Democrat, said her department requested $163 million for the coming year, down from its $259 million request for this year. The Governor’s proposal mostly meets that “bare minimum” request, but she lamented a $500,000 cut to Fresh From Florida, and a $680,000 recall from the current budget.

“With environmental protection being touted today as a priority, it’s also disappointing that one of Florida’s best environmental conservation tools would once again receive zero funding,” Fried said. “We look forward to working with the Legislature to advocate for these common-sense priorities.”

“We realize that this is going to be a tight budget year, but now is not the time to divert any funding from our public schools,” FEA President Andrew Spar said.