Donald Trump to far-right extremists: ‘Stand back and stand by’ 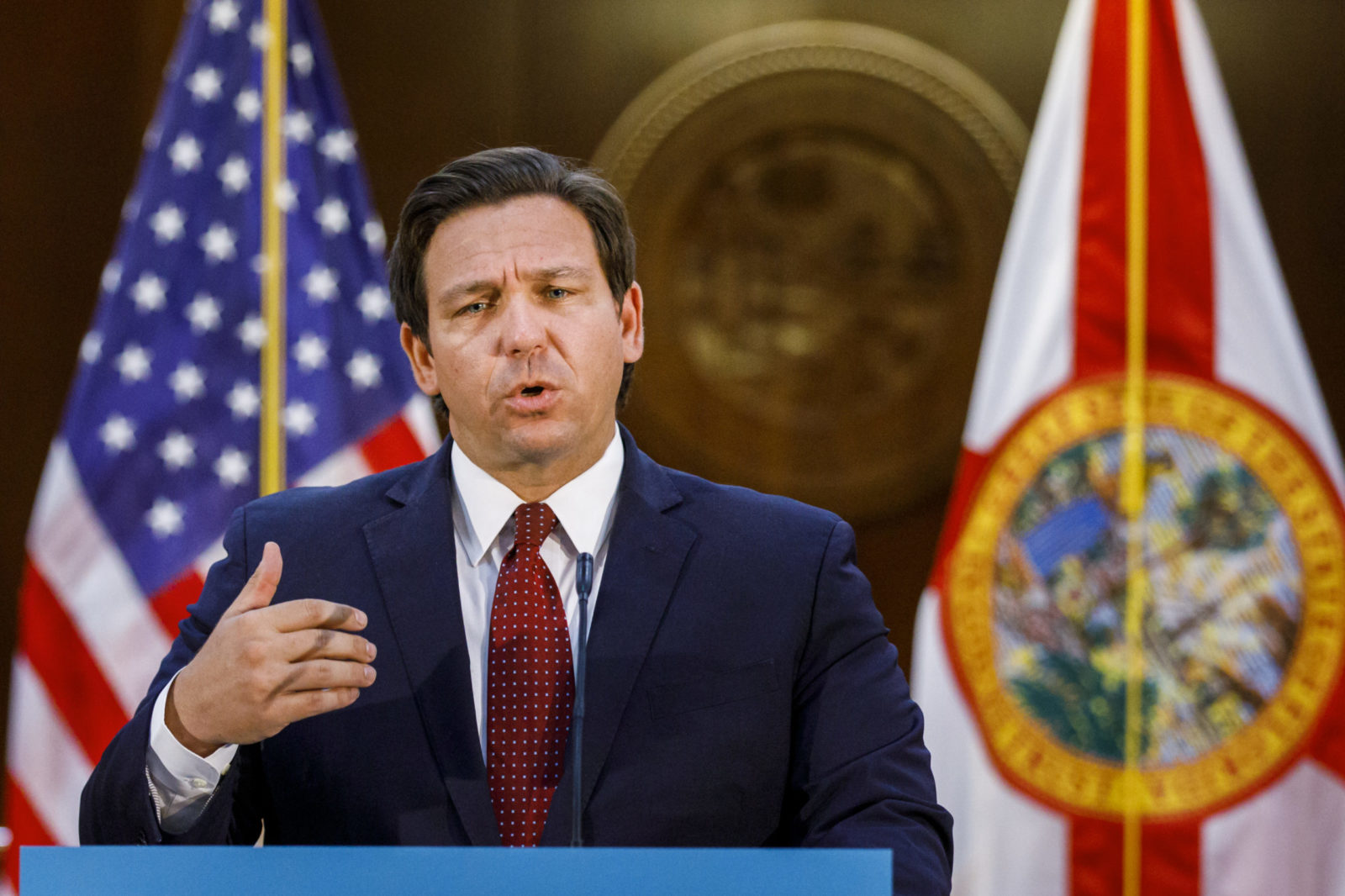 Gov. Ron DeSantis has made his decision on the state’s spending plan that kicks in Wednesday.

Earlier this month, the Governor cautioned his decision would be the “veto equivalent of the Red Wedding” in the face of the COVID-19 pandemic. That warning came true Monday with more than $1 billion in cuts from the Legislature’s proposal.

“We always knew that we could see an economic downturn, but I don’t think we necessarily forecast the economy simply stopping for a time,” DeSantis told reporters.

After asking the Legislature to wait months before sending him the budget to allow time for Congress to act and for data to trickle in, lawmakers formally presented DeSantis with their plan on June 17. The May revenue report, which was released Friday, was the last piece of the puzzle the Governor was waiting for.

While several of the Governor’s priorities got nixed in the budget cuts, DeSantis preserved his number one priority, teacher pay raises. On Wednesday, he signed the legislation outlining the pay raise program and confirmed its funding with his signature Monday.

In total, the Governor cut $550 million from items included in his own $91.4 billion budget proposal from the fall. Of the victims are the job growth grant fund, universities of distinction, a new 2nd District Court of Appeal courthouse in Pinellas County and  several smaller member projects.

Among the vetoes were $20 million for the state’s Job Growth Grant Fund, an economic-development program; $21 million for a new 2nd District Court of Appeal courthouse in the Tampa Bay area; $134.6 million for a school-recognition program; and more than $140.5 million in health- and human-services spending.

He also vetoed $264 million worth of legislative “member” projects, which generally are earmarks for lawmakers’ districts. Examples of the vetoes included $250,000 to digitize archives at the Harry S. Truman Little White House in Key West; $250,000 to reduce cold cases at the Broward County Sheriff’s Office; and $200,000 to harden the Fort Walton Beach Recreation Center.

Health and human services make up the largest chunk of the state budget, and DeSantis vetoed tens of millions of dollars that had been earmarked for programs for people with developmental and intellectual disabilities.

For instance, he vetoed $58.4 million lawmakers had approved to increase the rates paid to providers who work with people with disabilities in the state’s “iBudget” program. The iBudget program is designed to keep people with developmental and intellectual disabilities out of institutions by providing community-based services that enable them to live at home.

Additionally, DeSantis vetoed $38.4 million that would have been used to increase Medicaid rates to providers who care for people with disabilities who live in institutions.

Education is the second-largest part of the state budget, and DeSantis was able to salvage one of his top priorities of the Legislative Session – money to raise teacher pay. He signed legislation (HB 641) last week that set the framework for boosting the minimum salaries of classroom teachers to at least $47,500 and giving raises to veteran teachers.

A number of education initiatives, however, got vetoed Monday.

That included $15 million for the “Universities of Distinction” program, designed to support institutions by providing access to funds beyond the base money allocated to universities each year by the Legislature. Such funds could help universities do such things as recruit faculty members.

“It was kind of a new program,” DeSantis said.  “Not the worst idea in the world, but now is not the time to do it.”

“As the reality changes, I think we all have to recognize that none of us are going to get everything that we want, so I thought that it was important that I was stepping up to the plate on that as well,” he said.

Cuts were also made to recurring spending as the Governor sought to buffer future budgets against the lasting effect of the pandemic. About half of the vetoes come from general revenue while the other half comes from trust funds.

“Nobody has ever made more vetoes than I did right here,” said DeSantis. “I’m convinced we’ll be able to weather the storm.”

The state worker pay raise is included in the budget, as is the corrections pay increase and pilot program to transition corrections officers from 12 hour workdays to 8.5 hours.

There are significant investments in environmental areas. This budget retains $322 million for Everglades restoration, $50 million for springs and $40 million for alternative water supplies.

The Sadowski Affordable Housing Trust Fund also survived, but it is supplemented with $250 million in CARES Act dollars to keep it fully funded.

Most health care initiatives survived the budget vetoes, a new priority in light of the pandemic. Some provider increases that had already received increases received the main cuts from that silo.

With prospects of a second CARES Act coming from Congress later in the year, DeSantis said further federal relief funds should only supplement revenue lost directly because of the budget, not financial troubles states were already facing.

“I think that that lost revenue was something that was a result of the national policy in terms of how to do the pandemic,” he said, “so if they want to deal with that, obviously, I would be supportive of doing it.”

“The Governor knows that we cannot tax and spend our way out of recession,” Oliva said in a statement. “Today’s reality is a stark reminder that in times of plenty, saving for a rainy day is the only responsible use of the excess.”

But Rep. Ben Diamond, a St. Petersburg Democrat and member of the House Appropriations Committee, questioned the Governor’s use of CARES Act dollars to patch the budget without legislative approval.

“As this crisis worsens and further threatens the lives and livelihoods of Floridians, the Legislature has an important role to play in responding to it. So far, we have been sitting on the sidelines,” Diamond wrote to Oliva and Senate President Bill Galvano, a Bradenton Republican, on Monday. “We should be meeting to rework our budget priorities in the face of this crisis. We should be doing this work in an open, transparent and bipartisan way.”

Galvano pointed toward years of sound financial decisions that built up a reserve, allowing the state to preserve as many programs as it will.

“Despite these significant challenges, this balanced budget is a work product the people of Florida can be proud of,” he said. “Key priorities are funded, and our state remains on solid financial footing heading into the new fiscal year.”

DeSantis also vetoed 518 of the 829 member projects included in the budget for a sum of more than $264 million. Of 180 veto recommendations made by budget watchdogs at Florida TaxWatch, 81% received the red pen.

“These (revenue) losses underscore the need to resist complacency, double down on our resolve to defeat COVID-19, and continue to create and implement innovative solutions that ensure enduring fiscal accountability and strength for the Sunshine State,” said TaxWatch President and CEO Dominic Calabro.

“States like New York, New Jersey and Connecticut would never had made bold decisions like this to live within their means, which is why they have continued losing their citizens and investments to Florida,” Patronis said.

“As our economy recovers from the effects of a global pandemic, the last thing we need is another toxic blue-green algae and red tide crisis, both of which have negative impacts on human health and cause respiratory issues,” Eikenberg said. “This funding has always been important, but it is more important now as we deal with the coronavirus and its devastating health and economic impacts.”

And Melanie Brown-Woofter, president and CEO of Florida Behavioral Health Association, thanked the Governor for maintaining the majority of the projects for their more than 70 member organizations. She extended that gratitude to First Lady Casey DeSantis, who has been a proponent of mental health services.

Only first-time projects for their organization received cuts.

“Now more than ever, preserving this funding allows providers across the state to offer the services that are critical for our communities,” Brown-Woofter said. “While we are all still navigating challenging and unprecedented times due to the COVID-19 pandemic, protecting mental health and substance use treatment will ensure that we are continuing to do everything we can to help Floridians in need.”

“Without consulting the Legislature or any elected Democratic leaders, Ron DeSantis made massive budget cuts that will impact the lives of all Floridians,” she said. “DeSantis must own the consequences of these cuts, which will inevitably hurt our schools, our children, and our families.”

And Agriculture Commissioner Nikki Fried, the lone Democrat elected statewide, hit the Governor for slashing some programs she said was crucial for children and working families.

“Key funding was cut from programs supporting affordable housing, at-risk and blind children, health care workers, employment for young adults transitioning out of our foster care system, and a program to raise awareness on systemic inequalities faced by Black and Brown children,” she said.

Nick Iarossi, a veteran lobbyist with Capital City Consulting, applauded the Governor for balancing the state’s needs with its economic realities, including the teacher and state worker pay raises, increasing rates for nursing homes and infrastructure spending.

“I think he threaded the needle well,” he said.

Here is the Governor’s transmittal letter.