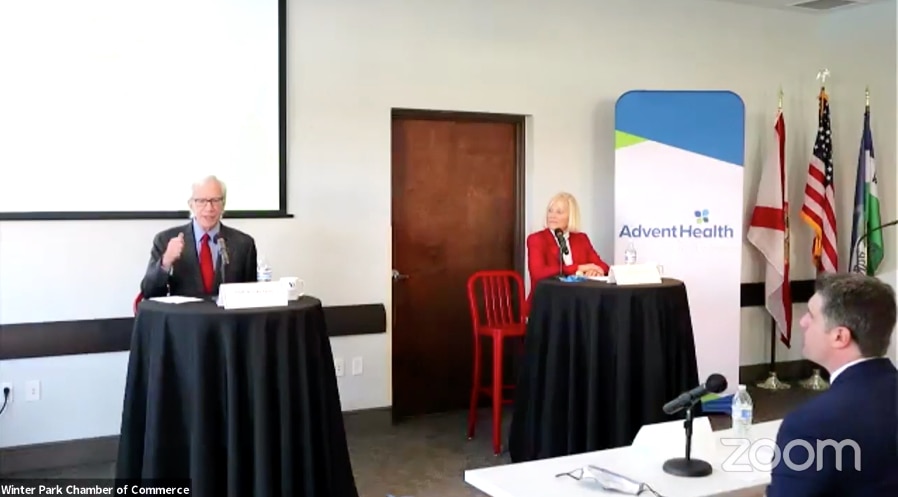 But by Monday afternoon candidate Phil Anderson and Chamber made up.

A Winter Park mayoral debate ended in hostilities Friday between candidate Phil Anderson, upset over the propriety of a question, and debate host Betsy Gardner Eckbert of the Winter Park Chamber of Commerce.

That was followed by demands for public apologies a month out from the March 9 city election between Anderson and Sarah Sprinkel to decide who will succeed Winter Park Mayor Steve Leary.

Then that was followed late Monday afternoon by a joint statement in which Anderson and the Winter Park Chamber of Commerce announced they had made up. Anderson also told the Orlando Sentinel Monday that he had apologized to Gardner Eckbert.

Until then, the “unfortunate incident,” as Monday’s statement had described the previous course, had provoked several strong reactions.

“We, the Board of the Winter Park Chamber of Commerce, strongly condemn this behavior,” the Chamber’s board said of Anderson’s post-debate reaction, in a statement issued Sunday night.

“I am astonished that the Chamber of Commerce would tolerate that kind of accusation and language in a question,” Anderson had proclaimed during the debate Friday.

“To say I was aghast at this question at the Chamber of Commerce mayoral debate this morning is putting it mildly,” City Commissioner Todd Weaver declared Friday on Facebook.

“That’s not my thing,” Sprinkel said of the whole affair.

Monday Anderson and the Chamber sought to patch it up.

“Following an unfortunate incident at the Winter Park Chamber of Commerce Mayoral Candidate Forum this past Friday, the Chamber and Phil Anderson’s campaign have come to terms with the matter and look forward to placing it behind us in an effort to bring our community together,” Monday’s statement read. “The Chamber thanks Mr. Anderson and Mrs. Sprinkel, the two mayoral candidates, for participating in the forum.”

Friday’s incident came in two acts, in the middle of an hour-long debate and then immediately after the debate. The forum included some in-person audience, and many more people watching through an online Zoom livestream. The Winter Park Chamber posted a recording on the its Facebook page.

During the debate, Sprinkel, and then Anderson, were asked about a controversial Henderson Hotel development, which had just been withdrawn a couple of weeks earlier. Tempers flared, but not about the project or the question, but rather how the question was worded.

The question had been submitted by someone in the audience. The query was selected by the Chamber, and was put to the candidates by moderator Lee Steinhauer, regarding the City Commission “blatantly colluding to fight the Henderson project.”

Sprinkel, a former City Commissioner who was out of office by the time the Henderson Hotel project came up, responded by talking about the need for strategic planning. She didn’t expressly respond to any implication that corruption was involved.

Anderson, also a former City Commissioner who was out of office by the time, took strong umbrage with what he called a “baseless” charge against the City Commission. He said it was inexcusable for the Chamber to ask a question worded like that.

Still, the mayoral debate returned to pretty congenial decorum until it ended, about 15 minutes later.

Then came Act 2, which reportedly occurred moments after the livestream was terminated, but before the room cleared. It does not appear on the video the Chamber posted. According to the statement put out by the Chamber and confirmed at least in some details by both Sprinkel and Steinhauer, Anderson stormed over to the rostrum where Gardner Eckbert stood, and they exchanged heated words.

He “grabbed the microphone from its holder and demanded that she ‘never do that again!'” the Chamber’s statement read. “The candidate’s anger and proximity prompted Ms. Gardner Eckbert to ask if she was being threatened and prompted a Chamber employee to run up to the podium to insert herself between the two. The exchange was described as inappropriate and disturbing by some who witnessed it.”

The Chamber added that its board members were “particularly sensitive to such conduct directed at a woman in her place of work – a subject we take very seriously.”

“We believe a public apology from the candidate is the appropriate next step,” the Chamber’s statement demanded.

Anderson did not immediately respond to inquires from Florida Politics Monday.

However, in social media posts and in some comments to Florida Politics, others contended it was the Chamber that had been out of line, and that Anderson was calling out Gardner Eckbert for that.

Strongest among those came from Weaver’s Facebook post. He asserted there “is not and never will be a need for ‘collusion.'” He then demanded, “The Chamber and its CEO Betsy Eckbert owe my colleagues and the candidates an apology for allowing such slanderous accusations in their public forum.”

The Chamber referred inquiries to Mike Carolan, past chair of the Chamber board and member of the board’s executive committee. He also did not immediately respond to a Florida Politics inquiry.

nextJoe Henderson: Say goodbye to the Super Bowl with a rundown of the real Winners and Losers