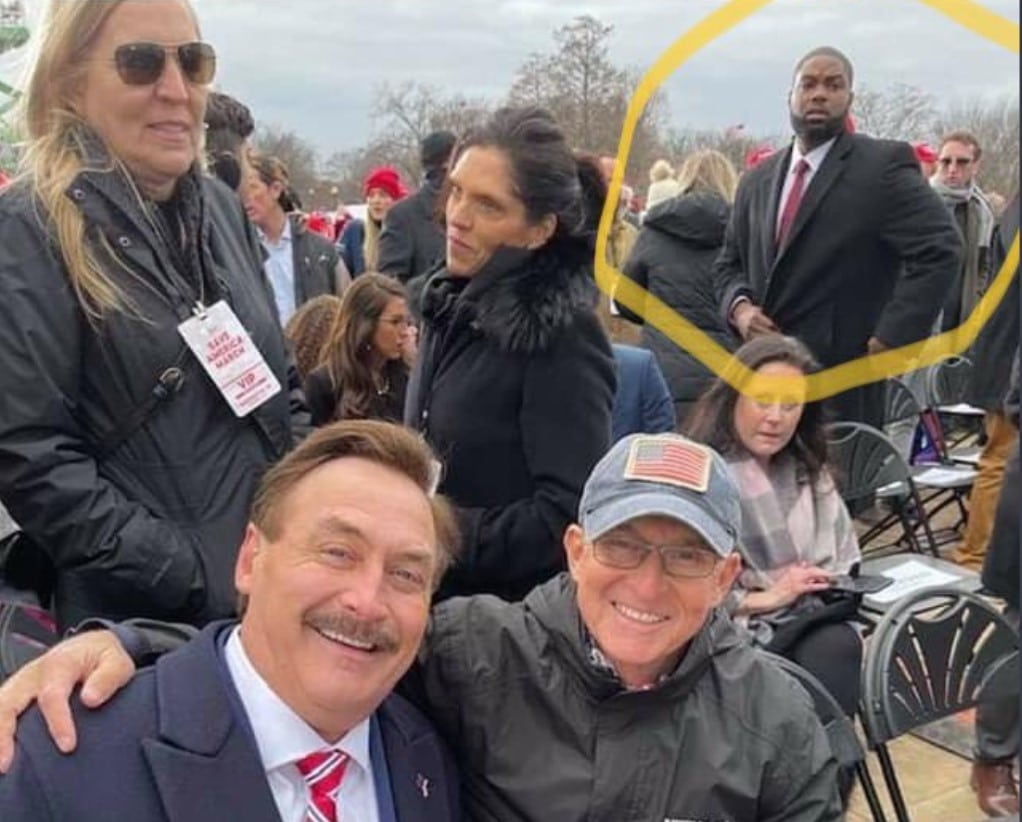 Naples Congressman didn't interact with Mike Lindell, but managed to get in a pre-riot picture.

A photo resurfaced Tuesday of U.S. Rep. Byron Donalds near some of President Donald Trump’s highest-profile supporters the day of the Capitol riots.

The Congressman, of course, was inside House chambers with his colleagues deliberating the certification of election results as Trump gave a speech at the White House that directly led to his impeachment. He was also there as pro-Trump protesters besieged the Capitol.

But the Naples Republican’s office confirmed that earlier in the day he attended events outside the Capitol with Trump supporters.

“Congressman Donalds attended the rally early in the morning and was back at the Capitol (on the House Floor) at the time of the attack,” reads an email from his office.

The matter came up because Trump ally Mike Lindell, best known as the founder of MyPillow, posted a picture on Facebook from outside the Capitol where Donalds can be seen in the background. Lindell is shown seated beside former National Security Adviser Michael Flynn.

“It has been a long day so far! Becoming great friends… it’s an honor to help General Flynn!” Lindell wrote. “Donald J. Trump is going to be our president for 4 more years!”

“This you at the rally from the video at the opening of the impeachment trial?” she tweeted. “Asking for all constituents in (Florida’s 19th Congressional District).”

Banyai, who has announced she’s running for the seat again in 2022, first posted the image from Lindell’s feed on Feb. 3.

Lindell funded a “documentary” detailing debunked accusations Democrats stole the 2020 election. He paid for the film to play for 12 hours on OAN, with the network posting a disclaimer the information is “not intended to be taken as fact.” He also came under fire for, after the riots, presenting a plan to Trump to retain power through a coup.

There’s no indication Donalds had any interaction with either man, and he was apparently just captured in pictures at the same event.

The Congressman posted his own video on Twitter the same day as he walked to the Capitol. In it, Donalds expressed his own intention to challenge Biden’s win.

“I’m about to sign the objection forms to object to the certification of the electoral college in four states: Pennsylvania, Michigan, Wisconsin and Georgia,” he said. “It’s important we always uphold our law and the constitution no matter what, and that’s my job here in Congress.”

Donalds ultimately was among 12 Florida members of Congress to object to all four states’ slates of electors. Had those states’ votes been thrown out, the decision of electors would potentially have gone to state congressional delegations, who likely would have given the election to Trump.

Some members of Congress, including Rep. Michael Waltz, a Saint Augustine Republican, had intended to challenge electors, but backed off that approach after violent riots disrupted deliberation about the election results.

Donalds followed through, along with a majority of Republicans in the House. He later attended Biden’s inauguration in a show of national unity.

“The (Democratic Party)’s ideas are so vapid and minuscule all they can do is impeach a FORMER POTUS instead of legislating,” he tweeted. “They know the Green New Deal, open borders and defunding the police got them nowhere, so now it is all about DJT. So much for being able to walk and chew gum at the same time.”