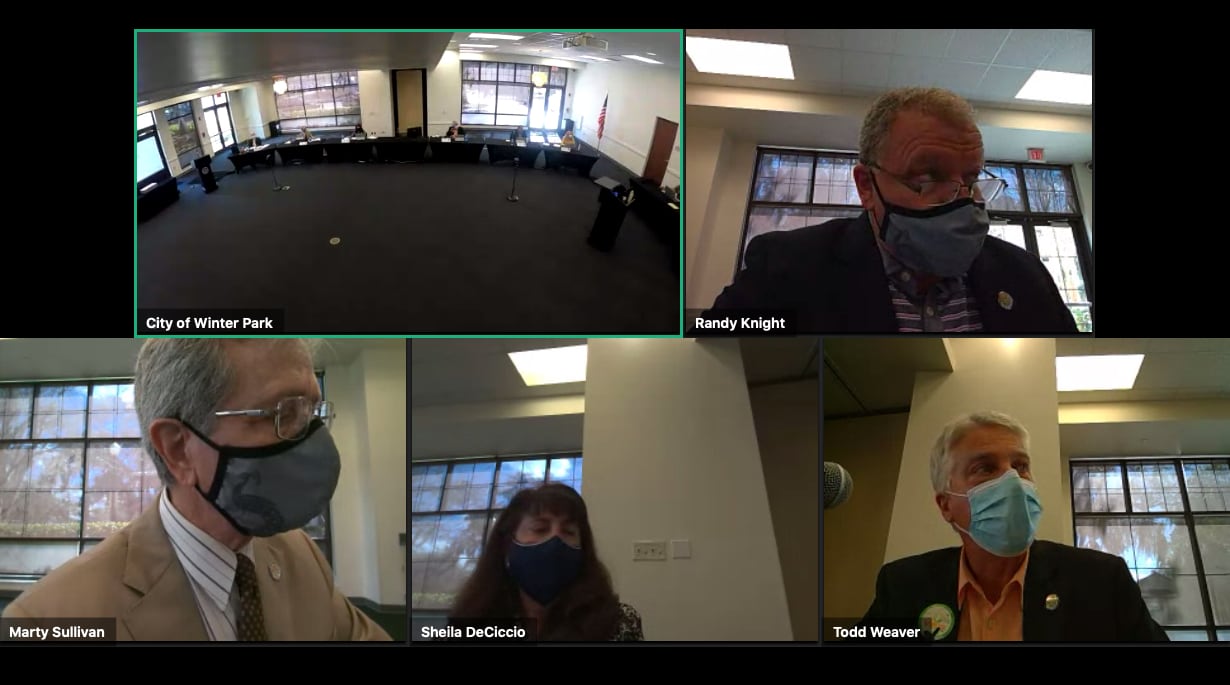 The Winter Park City Commission appeared Thursday to be moments from adjourning a special meeting with hope that hard feelings with the Chamber of Commerce could be smoothed out during a workshop they hoped to arrange. And then a Chamber representative spoke.

That hope appeared replaced by another layer of indignation for four Winter Park City Commissioners, after lobbyist Derek Bruce took Commission Chair Todd Weaver‘s invitation to speak before they adjourned. And then Bruce tried to redefine their concern.

The whole matter arose from a question raised last Friday at a mayoral debate the Chamber hosted. The Commissioners contended the question’s wording implied they had violated the Sunshine Laws before considering a proposed hotel rezoning last month. So on Tuesday they called a special meeting  for Thursday to air their grievances and seek redress.

Until Bruce approached, the Commission appeared somewhat satisfied. They had each defended themselves, blown off some steam, and agreed to seek a sit-down with the Chamber, to discuss what happened, and work toward repairing any tears in the relationship.

But two little words stood in their way.

They were the same two words that had brought the whole feud into the public after they were spoken aloud last Friday in a mayoral debate, which the Chamber had organized at the Welcome Center in Winter Park.

Those two words exacerbated divisions between the four Commissioners and the Chamber.

During Thursday’s meeting, a sizable number of residents expressed outrage, for either side. Some charged the commissioners are thin-skinned, against freedom of speech, and in fact may have potentially colluded outside of open meetings. They charged that a January deliberation on a controversial hotel project seemed to suggest they had had previous discussions. Others contended the Chamber was way out of line, allowing stark, unsubstantiated allegations, because, they suggested, the Chamber really wanted the hotel but the commissioners essentially drove it away.

They’re not thin-skinned, each Commissioner insisted Thursday. Instead they argued they were not going to stand for having the Chamber lend credibility to an assertion that the board violated the law. They don’t collude, members said, not on the Henderson Hotel proposal, and not any other time.

“Not only was it accusing us of a crime, but it [the word colluded] had an adjective ahead of it. And that word is ‘blatant.’ And blatant means overt or obvious, right?” Weaver followed. “So nobody produced any evidence whatsoever.”

And yet after 90 minutes, the four Commissioners appeared ready to move on.

And then Bruce offered his own interpretation of the two little words.

“I did hear the definition earlier. ‘Collusion’ is defined as a secret agreement. … And then there is the modifier that I heard talked about earlier. ‘Blatant.’ And the definition of that is brazenly obvious. When you put those two words together, they are almost diametrically opposed. In some ways, they counter each other, cancel each other out,” Bruce offered.

The Commissioners weren’t in the mood to accept a depends-on-your-definition argument.

That led the Commissioners to demand the Chamber take down a video recording of the debate that apparently has been playing at the Mayflower Retirement Center. Bruce declined, saying the Chamber does not control the Mayflower.

That led them to demand the Chamber edit the video, or include a disclaimer that the reference to ‘blatantly colluded’ is not supported. Bruce pointed out that the video was uploaded onto Facebook, and so out on the internet, and that he couldn’t commit to such a thing.

That led them to demand the Chamber issue a public apology and disavow the two words. Again, Bruce declined, saying he was not authorized to do so.

So the city’s effort to set up the joint meeting with the Chamber will go forward, but with new urgency, and some additional anger, at least on the commissioners’ side.

“Moving forward with a meeting with the Chamber is extremely important. … However, I also know that all of this upheaval has caused many people … to have great confusion and question regarding the credibility of the Commission. And to me that cannot wait,” Cooper said.