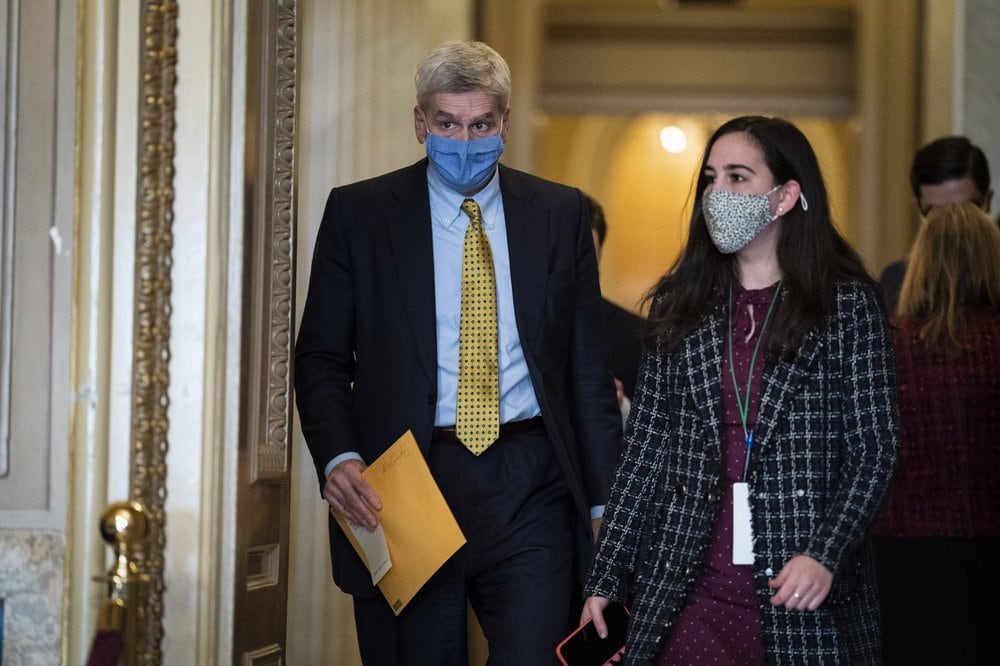 If Trump were convicted, the Senate could take a second vote to ban him from running for office again.

Most every senator has pledged to listen to the evidence in Donald Trump’s historic second impeachment trial, but most minds were likely made up before the trial began. Democrats would need a minimum of 17 Republicans to vote with them to convict Trump of incitement of insurrection, and that appears unlikely.

Still, Democrats say they are holding out hope they will win over enough Republicans to convict the former president for his role in the Jan. 6 Capitol riot, in which five people died. But that hope dimmed when word came Saturday before the trial resumed that Senate Republican leader Mitch McConnell would vote to acquit Trump.

If Trump were convicted, the Senate could take a second vote to ban him from running for office again. A final vote is likely on Saturday.

A look at the Republicans whom Democrats are eyeing as they make final arguments in the case:

Republican Sens. Lisa Murkowski of Alaska, Ben Sasse of Nebraska, Mitt Romney of Utah and Susan Collins of Maine have been clear that they believe Trump incited the riot. While none of them is a lock to vote for conviction, they have joined with Democrats twice to vote against GOP efforts to dismiss the trial.

Collins said after the siege that Trump does “bear responsibility for working up the crowd and inciting this mob.” Murkowski called on Trump to resign after the attack on the Capitol, telling a local paper three days later that “I want him out. He has caused enough damage.”

Romney tweeted on Jan. 6: “What happened at the U.S. Capitol today was an insurrection, incited by the President of the United States.” During the trial, the Democrats showed video of Romney narrowly escaping the mob, redirected by a Capitol Police officer as he unknowingly ran toward the violent crowd.

Sasse said that Trump had “lied to” Americans and the “consequences are now found in five dead Americans and a Capitol building that’s in shambles.” In a recent video, he said Republican politics shouldn’t be about the “weird worship of one dude.”

Murkowski, Collins and Sasse voted to acquit Trump during his first impeachment trial, in which Democrats charged that he had abused his power by urging the president of Ukraine to investigate then-White House candidate Joe Biden. Romney was the sole GOP guilty vote, leaving the Democrats far short of conviction.

Pennsylvania Sen. Pat Toomey, who is retiring in 2022, has also voted twice with Democrats to move forward with the trial. Like Murkowski, he called for Trump’s resignation after the riots, saying that would be the best way to “get this person in the rearview mirror for us.” Toomey had also aggressively pushed back on Trump’s false assertions that he had won Pennsylvania and other states in the election.

Three other GOP senators have said they will not run again in two years, potentially freeing them up to vote against Trump and anger base voters in the party. They are Rob Portman of Ohio, Richard Burr of North Carolina and Richard Shelby of Alabama. All three voted to dismiss the trial, but Portman says he still has an open mind about conviction.

Burr said Thursday that he would not comment on the trial at all. Shelby said this past week that the impeachment managers had a “strong point” that Trump could have acted sooner to stop the violence, but maintained that the trial is unconstitutional because Trump is now out of office.

Sen. Bill Cassidy, who won reelection by a large margin in 2020, voted two weeks ago for a GOP effort to dismiss the trial. But he switched his vote this past week, saying Trump’s lawyers had done a “terrible” job making the case that the trial was unconstitutional.

Cassidy, who has been taking extensive notes throughout the trial, said Friday that the managers had raised some “intriguing questions” during their two days of arguments. He said that he hoped Trump’s lawyers would answer them thoroughly and that he is “trying to approach it objectively.”

During the trial’s question and answer session on Friday afternoon, Cassidy asked Trump’s lawyers about a conversation the then-president had with Sen. Tommy Tuberville, on Jan. 6 just after Vice President Mike Pence had been evacuated from the Senate. Tuberville says he told Trump that Pence had been whisked away, making clear that Trump likely knew of the danger at that point.

Lawyer Michael van der Veen dismissed Tuberville’s account as “hearsay,” an answer that Cassidy later said was not sufficient. Van der Veen also said Trump was at “no point” informed of any danger to Pence.

South Dakota Sen. John Thune, the No. 2 Republican leader, dismissed Trump’s attempts to challenge the certification of Biden’s presidential election victory. Thune predicted the effort would “go down like a shot dog″ in the Senate.

That comment drew a furious response from Trump, who urged South Dakota Gov. Kristi Noem to run against Thune in a GOP primary, an idea she immediately rejected.

Still, Thune has voted twice to dismiss the case. He said Friday that he was keeping an open mind and indicated he could be open to a censure resolution if Trump is acquitted.

“I know a couple of my colleagues who’ve seen a couple of resolutions, at least, that I think could attract some support,” Thune said.

McConnell will vote to acquit Trump in the former president’s impeachment trial, according to a source familiar with McConnell’s thinking who was not authorized to publicly discuss the decision and spoke on condition of anonymity.

Word of McConnell’s decision came Saturday before what is expected to be a final day in the historic trial on the charge that Trump incited an insurrection in the deadly Jan. 6 riot at the Capitol.

The Republican leader’s views are closely watched and carry sway among GOP senators, and his decision on Trump is likely to influence others weighing their votes.

While most Democrat are expected to convict Trump, the two-thirds vote needed for conviction appears unlikely, given that the Senate is evenly split 50-50 between the parties.

nextRick Scott rails that travel ban would be 'attack' on Florida