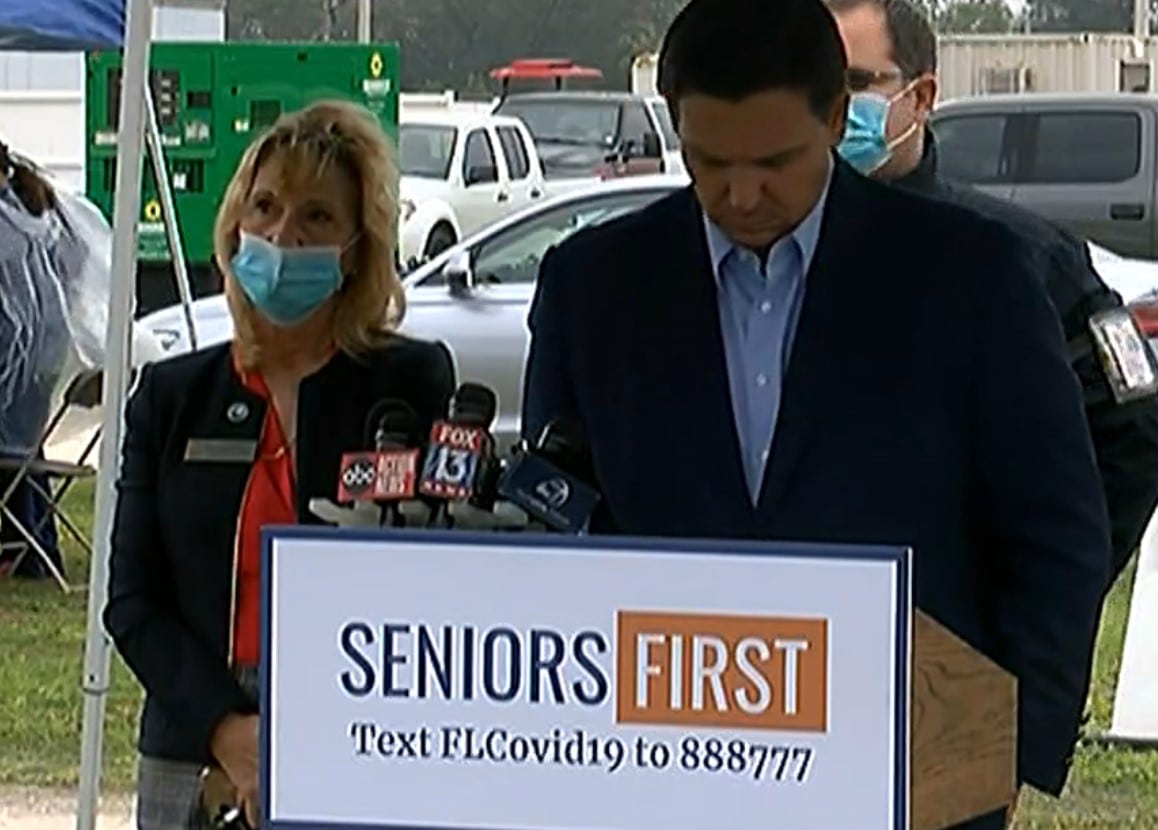 Gov. Ron DeSantis announced the state will direct 3,000 additional Moderna vaccines to Lakewood Ranch seniors. But a day after news broke locally shots would go only to residents of two wealthy zip codes, the standard fanfare did not accompany the announcement.

At a press conference at Premier Sports Campus, where the additional community pods will be set up, DeSantis fielded combative questions about favoritism. The Governor stressed these additional vaccines will be distributed in addition to those sent to the county through normal channels. But he also implied that he could reallocate vaccine from areas where he fields criticism to those more favorable to the Governor’s approach.

“If Manatee County doesn’t like us doing this, we are totally fine doing this in counties that want it,” DeSantis said. “Most people, I think, will want it. There are going to be folks who complain about getting more vaccine. But I’ll tell you what, I wouldn’t be complaining.”

But political opponents continued to pile on. Agriculture Commissioner Nikki Fried, a likely Democratic challenger to DeSantis in 2022, quickly sent a statement about the alleged special access given to wealthy neighborhoods.

“There is no reason that Governor DeSantis should be rationing vaccines based on political influence. This is troubling and potentially illegal,” she said. “Vaccines should be distributed to counties based on need, capacity and science. While I am disappointed in the Governor using vaccines as a political tool, I plan on working with the [Joe] Biden Administration to ensure they do not penalize Floridians for his actions and continue to ramp up vaccine distribution to all communities, so that we can get our economy and state going again.”

The Bradenton Herald reported the Governor’s Office had reached out to Lakewood Ranch developer Rex Jenson, President and CEO of Schroeder-Manatee Ranch, about setting up sites within the senior-rich community.

DeSantis dismissed assertions that outreach came because Jensen and Lakewood Ranch supporters have supported him politically. Rather, he said health officials had looked at counties statewide where a lower percentage of seniors already received the vaccine and coordinated outreach.The state similarly set up community pods in Sun City Center, Delray Beach and The Villages. That’s a range of locations that includes very conservative areas like Sumter County and liberal ones like Palm Beach County.

In particular, DeSantis said Manatee, Sarasota and Charlotte counties in Southwest Florida, until recently, reported much lower percentages of seniors who had been vaccinated.

In Manatee County, 41,480 had been vaccinated through midday Tuesday; that number includes both seniors and frontline health care workers who had at least one dose of vaccine. Census estimates show more than 113,000 seniors age 65 and older live in the county.

By comparison, 207,213 have been vaccinated in Broward, the most Democratic county in the nation and home to about 334,000 seniors.

Baugh stood alongside DeSantis at the press conference, but did not speak or take questions at the podium. When fellow Manatee County Commissioners criticized Baugh for negotiating an arrangement where vaccines went to her constituents, she said she would take political responsibility but considered the shipment a win.

“People need to look at the statistics. There have been other clinics and many people out east haven’t received the vaccines and are underserved. I see it as a win-win,” Baugh told the Herald. “This is not a negative situation.”

But criticism has come.

“For the life of me, I can’t understand why we would vaccinate the most affluent neighborhoods in the county ahead of everyone else, especially the underserved neighborhoods and large number of manufactured home parks in our community,” Manatee County Commissioner Misty Servia, a Republican, told the Herald.

DeSantis said directing vaccines through the developer was just about finding outreach to eligible seniors, not about serving a particular zip code. He said it’s no different than the state working with Black churches, synagogues and mosques in South Florida to reach communities that were underserved.

“In every community we’ve done, when we go to senior heavy communities, people appreciate it,” DeSantis said.