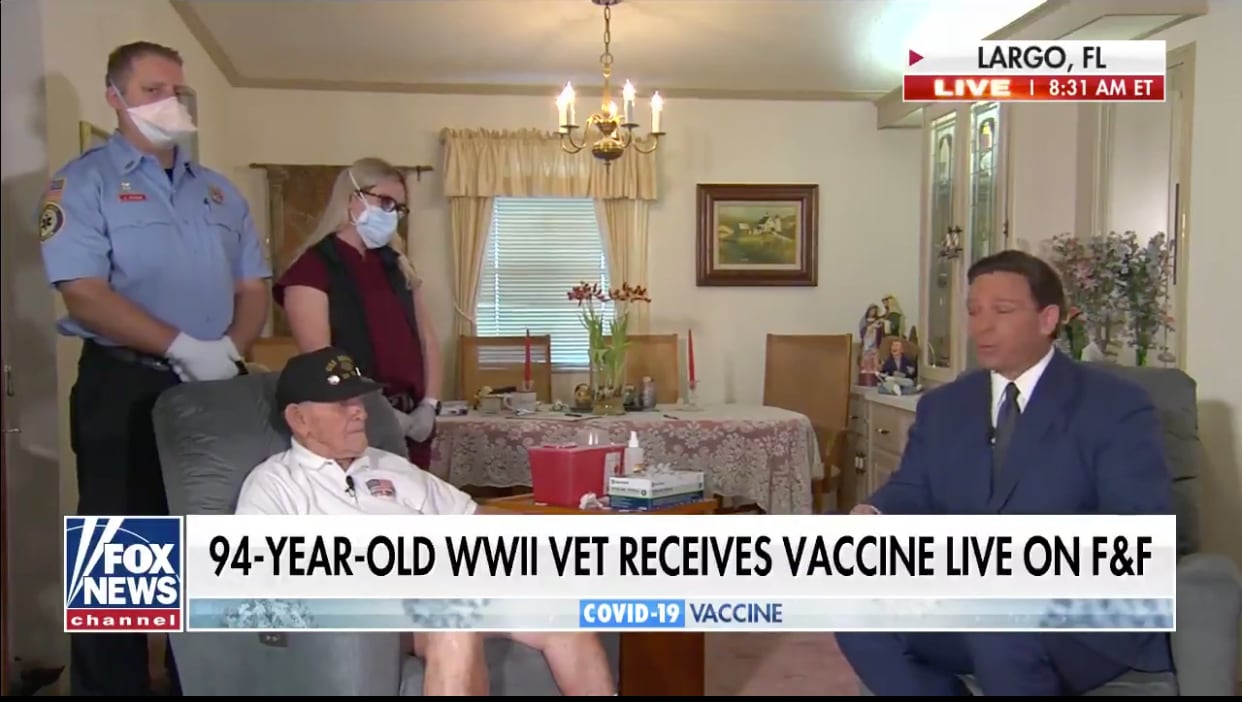 DeSantis made a vaccine house call to a WW2 vet.

Gov. Ron DeSantis, in Southwest Florida Thursday morning for a vaccine highlight, also found time to visit with “Fox and Friends,” less than 12 hours after appearances comparing the departed Rush Limbaugh to Babe Ruth and sidestepping questions about perceived threats earlier Wednesday to pull vaccines from locals who crossed him.

The setting was more amiable: the home of Vern Cummings, a 94-year-old Largo man and World War II veteran who got the shot under the lights of television cameras and the Governor’s warm smile.

Fox had covered the inoculation of who was billed, prematurely, as the 1 millionth senior. As that number approaches 2 million, the earned media keeps coming, as the state ramps up vaccinations for homebound seniors as part of its “Seniors First” approach to vaccinations.

“We have seniors who may not be able to go to a vaccination site, a hospital,” DeSantis said, with people in their 80s and 90s as examples.

“We started this a couple weeks ago with Holocaust survivors down in South Florida,” DeSantis said of vaccinations for the homebound. “We’ve done Bay of Pigs veterans, with the Cuban Americans down in Miami. And for the last week or so we’ve been doing World War II and Korean veterans.”

Cummings said he was “very happy,” saying he thought it would “take forever” to get the shot.

“I never thought the Governor would be sitting in my house and watching,” Cummings marveled. “How many guys have the Governor to be watching their vaccination.”

The Governor asked how the shot felt.

With DeSantis struggling with in-state media, the calculus was clear with the warm-up on Fox: to bypass the gatekeepers and get his message in undisturbed.