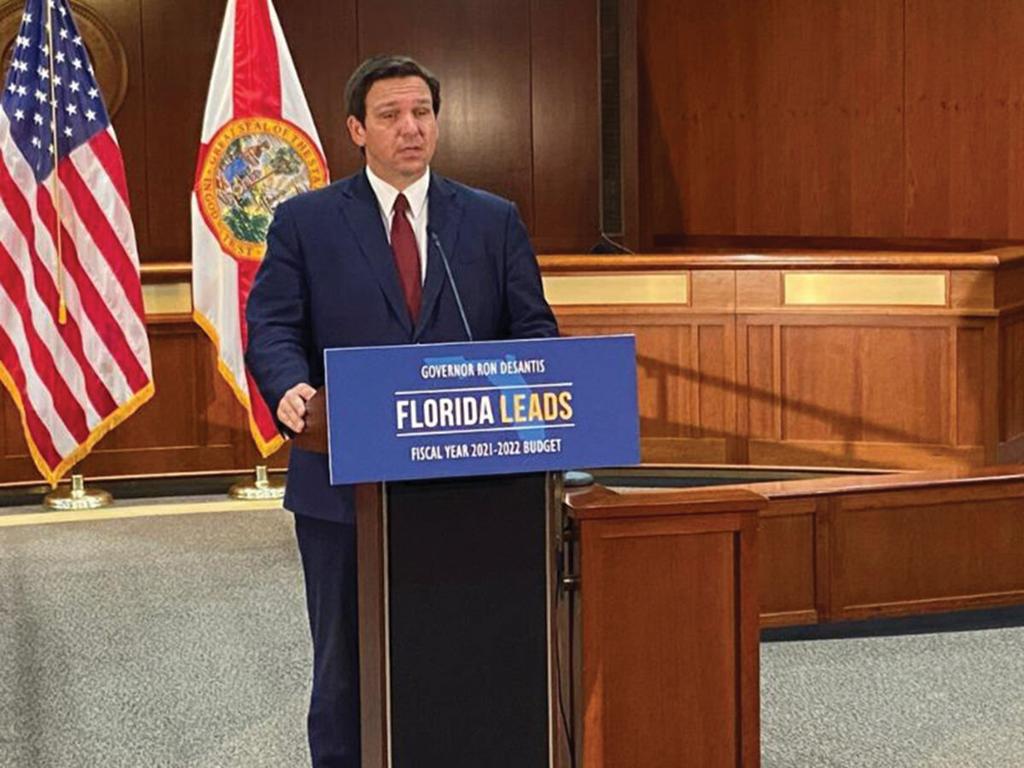 'Perhaps before we go and secure debt, can we find the revenues?'

Now, as many lawmakers accept the science and back the need to develop a statewide plan to address the impacts of rising sea levels, hurricanes and flooding on a predominantly flat state, questions focus on a debt-adding $1 billion resiliency program pitched by Gov. Ron DeSantis.

Environmentalists would like DeSantis to go further, to also address the causes of climate change rather than just the effects. Meanwhile, Republican legislators with a tight grasp on the state’s purse strings have yet to fully embrace DeSantis’ proposed four-year “Resilient Florida” plan as the 60-day legislative session prepares to begin March 2.

But the proposal came as lawmakers grapple with a budget shortfall caused by the COVID-19 pandemic, while DeSantis maintains a rosier outlook on the economy. And incurring long-term debt through bonding — as DeSantis proposes for Resilient Florida — is a big issue for Republicans who consider themselves fiscal conservatives.

Rep. Lawrence McClure, a Dover Republican, would like House staff members to determine if existing dollars are available to cover the resiliency program.

“Perhaps before we go and secure debt, can we find the revenues?” McClure asked of DeSantis’ bonding proposals. “Obviously, we’re facing budget challenges in the wake of the last year, and certainly even before that with storms and other events. So, I’m a little curious, and quite frankly, marginally concerned about taking on a debt load, no matter the interest rate, when maybe we don’t fully understand the entire budget forecast.”

Admitting he’s “just beginning to understand fully the intent of the resiliency project,” Rep. Rick Roth, a Republican from West Palm Beach, was among those with questions about the approach being taken by DeSantis’ Department of Environmental Protection.

“It says that the program will fund the incremental costs required to deal with sea-level rise, which is I think what everybody was assuming,” Roth said. “But when I read all these implementation projects, it doesn’t just immediately jump out at me that these projects are dealing with sea-level rise. For example, public facilities used for emergency response and management. That could even be a coastal structure for the discharge of rainfall by the water management district, where they’re having to retrofit that project.”

Alex Reed, director of the department’s Office of Resilience and Coastal Protection, said any public building built within a coastal area that has the potential for flooding needs to be considered for preventive measures.

Also, with a premium placed on flood concerns, Reed said the state is looking beyond coastal communities.

“Any time you have a discharge of a stormwater discharge or discharge from a water management district, for example, we need to make sure that as sea levels rise, we don’t have flooding as a result of those discharge locations,” Reed said.

DeSantis’ proposal seeks to distribute up to $160 million in grants the first year of the program, through a non-profit entity that would be called the Resiliency Florida Financing Corp. The money would come from bonding $25 million the state picks up as part of documentary stamp taxes on real estate transactions. State voters have already directed a third of the so-called “doc stamp” money go to land and water conservation.

Under DeSantis’ proposal, state lawmakers would up the money for paying debt service on bonds to $50 million in 2022, to $75 million a year later, and $100 million in the fourth year of the program.

“We are not the least bit surprised that his proposal addresses only the symptoms and not the disease,” Cullen said. “Greenhouse gas emissions have to be cut ASAP, and his plan does nothing.”

While the proposal would help local communities plan for the impacts of rising sea levels, Cullen pointed to potentially recurring problems in the future.

“What the governor fails to include in his calculations is the fact that the problem is getting worse and will continue to do so,” Cullen said. “If we don’t cut back on the cause of sea-level rise, the money spent on protecting regionally significant assets will have to be spent over and over again as the sea level continues to rise. Resilience is the ability to bounce back, not to retreat gracefully. But that’s what the governor’s approach amounts to.”

“The fact that this is a multi-year initiative acknowledges this reality, and the proposal to issue bonds recognizes the urgency,” Wraithmell said.

But more innovative green infrastructure solutions are needed, Wraithmell added, citing a need to fund other efforts such as the Florida Forever and Rural and Family Lands conservation programs.

“One proposal can’t do it all in the face of a threat as large as climate change, but this proposal represents a sea change for Florida, which has had climate leadership at the city, county, and regional levels for years, but has lacked concerted leadership at the state level,” she said. “It needs to be paired with robust appropriations for Florida Forever, Rural and Family Lands and Everglades restoration because habitat conservation and restoration are some of the most powerful resilience tools available to us.”

Since his 2018 election, DeSantis has successfully worked with lawmakers on his environmental priorities, drawing at least $625 million a year into Everglades restoration and other water-related projects, the same amount he’s requesting for the upcoming 2021-2022 fiscal year. The bulk of DeSantis’ new request, $493 million, would continue the Everglades efforts.

next'Help is on the way': Kathy Castor reacts to passage of American Rescue Plan