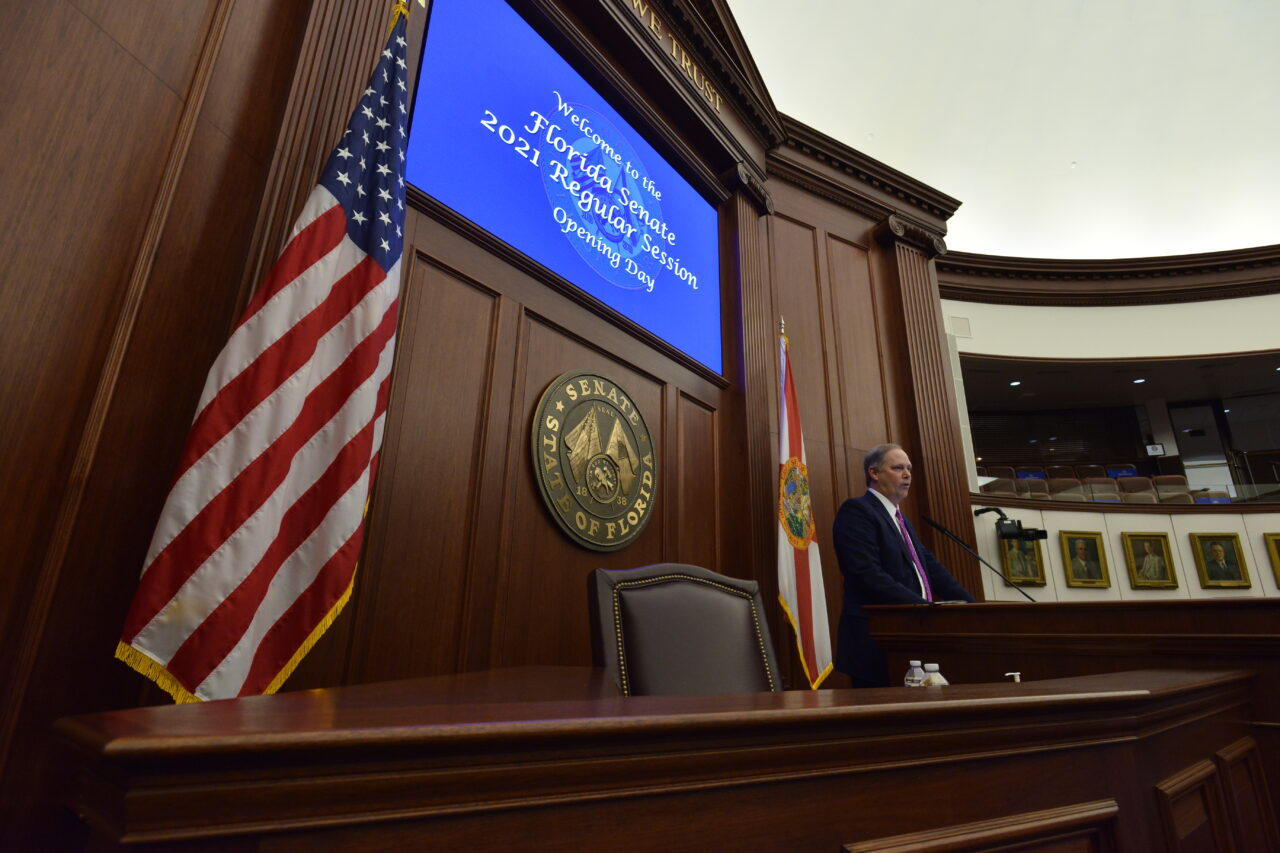 Speaking to lawmakers from atop the Senate dais, Simpson acknowledged Florida’s exigent circumstances and led with an homage to Floridians “struggling and succeeding against all odds.”

“We all recognize that the minor inconveniences we face here in Tallahassee pale in comparison to the sacrifices of so many who have endured so much as a result of this pandemic,” Simpson said. “It is their sacrifices which give us motivation to make the most out of this Legislative Session.”

While he acknowledged federal help may arrive soon, he warned lawmakers against funding “ongoing needs with nonrecurring funds.”

Simpson said federal funds should be used to “reinvigorate” the economy.

“We can do that with dynamic, one-time investments in our shovel-ready road projects, our water infrastructure, and we ought to replenish our unemployment trust fund, which would be a major tax cut for our Florida businesses,” Simpson said.

He noted that unfunded liability — a measure used to assess the state’s future pension obligations – is roughly $36 billion.

Simpson called on the Senate to take action.

“We have seen other states’ pension plans go bankrupt,” Simpson said. “People were made promises that their states could not keep. Our current retirees and every state employee should be very concerned.”

He noted the recent constitutional amendment that will gradually raise Florida’s minimum wage to $15 an hour.

Simpson urged lawmakers not to drag their feet.

“Senators, let’s get on our way,” Simpson concluded.

Sprowls, meanwhile, kept his remarks brief, limiting himself to four minutes. But in the concise address, he hit on the pandemic, unemployment, education and health care, with all of it shaped by the effects of COVID-19.

“As we begin this new decade, I see fresh ideas in the bills that have been filed and the beginnings of a new conservative vision that empowers individuals, holds government to account and prepares Florida today for the problems of tomorrow,” Sprowls said.

The Speaker, a Palm Harbor Republican, also took swings at the left. Florida must defend itself against rising sea levels and “intolerance created by the rising woke agenda,” he said.

That fight extended to “taking on a higher education establishment that seems more worried about social justice than they are about social mobility,” he said.

Sprowls also dismissed the narrative of the House, Senate and Governor locking horns over individual priorities. Moreover, lobbyists and “self-righteous” reporters are already driving the narrative on the issues they care about, he added.

Each person involved in the process will experience their own Session, he promised.

“The issues they and you will work on will feel like they are at the center of Session, and for all intents and purposes, they are,” Sprowls said.