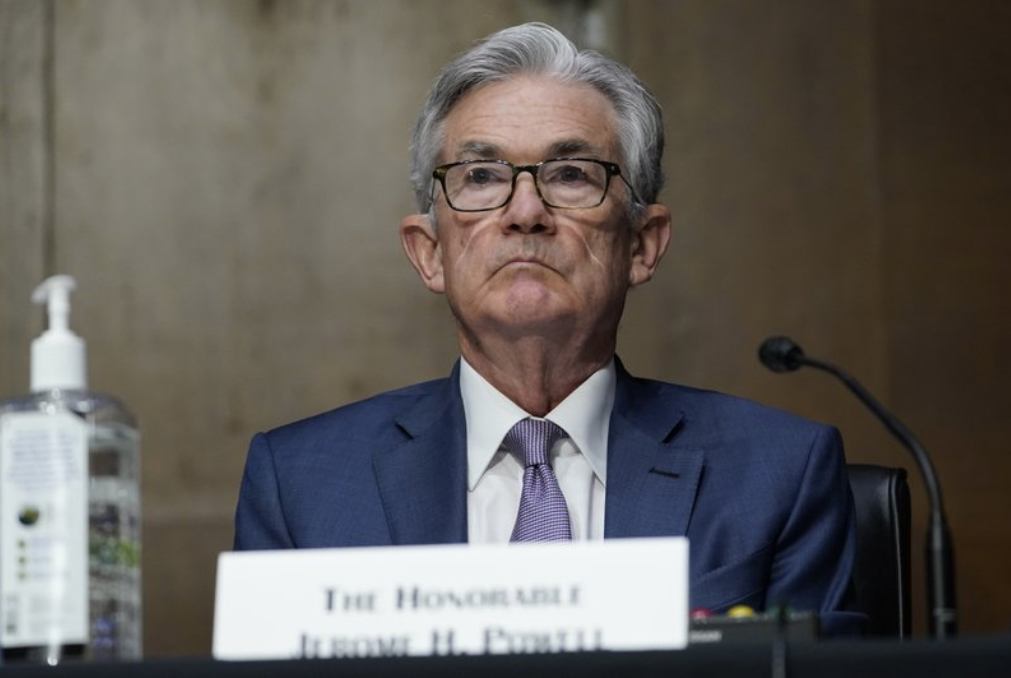 Federal Reserve Chair Jerome Powell suggested Thursday that inflation will pick up in the coming months but that it would likely prove temporary and not enough for the Fed to alter its record-low interest rate policies.

His message of wait-and-see patience caused bond yields to jump and stocks to fall further, signaling that investors foresee stronger growth and higher inflation on the horizon. The yield on the 10-year Treasury note had jumped from below 1% at the end of last year to roughly 1.4% Wednesday — and then surged above 1.5% during Powell’s remarks.

Stock investors, too, dumped shares in the midst of Powell’s remarks, in which he suggested that the Fed would need to see both a near-full recovery in the job market and a sustained rise in inflation above its target level before considering a rate hike. The S&P 500 index shed 2% of its value Thursday afternoon and slid into the red for the year. The tech-heavy Nasdaq pulled back 2.8%. Higher yields on government bonds can entice some investors to sell stocks and buy Treasurys instead, thereby forcing stock prices down.

Powell also said the outlook for the economy has improved after three months of weak job growth. But he cautioned that the economy and the job market are still far from fully recovered and that full employment would not be achieved this year.

The chairman also offered no signal that the Fed might respond soon to rising rates on Treasury securities by altering its bond-buying policies. The central bank is purchasing about $80 billion a month in government bonds. Some analysts argue that the Fed could focus more of those purchases on the 10-year Treasury to keep it from rising much further.

The surge in Treasury bond yields has also forced up mortgage rates. Last week, the average rate on the benchmark 30-year mortgage breached the 3% mark for the first time since July, according to mortgage buyer Freddie Mac.

Powell suggested, though, that the Fed would sit tight for the foreseeable future.

“We think our current policy stance is appropriate,” Powell said.

Earlier this week, San Francisco Fed President Mary Daly and Chicago Fed President Charles Evans said they weren’t bothered by the move higher in interest rates. They characterized it as a positive signal that markets expected growth to pick up.

Powell said Thursday that the last week’s jump in yields “was notable and caught my attention.” But he said the Fed wouldn’t be concerned unless the Treasury market became “disorderly” or rates rose persistently enough to threaten the economy’s growth.

As the economy reopens in the coming months with vaccines more widely distributed, many economists expect a spending boom that will stretch available supplies of goods and services. That additional spending could send prices up in some sectors of the economy.

For example, gas prices have been rising as Americans are venturing out more. Yet oil production hasn’t yet caught up, making gas more expensive. And when Americans do return to pre-pandemic habits, such as going to movies or eating out, they will have find many of their former favorite haunts closed.

Once price declines that occurred about a year ago when the pandemic began are removed from the year-over-year calculations, inflation will temporarily rise. But the Fed won’t see either of those trends as worrisome increases that would force them to change their policies, Powell said.

“If we do see what we believe is likely a transitory increase in inflation, where longer-term inflation expectations are broadly stable, I expect that we will be patient” about making any changes, he said.

Higher inflation is unlikely to persist, Powell said, because most consumers and businesses expect mild prices gains, and therefore will keep their prices and wage demands in check. Global competition and online shopping also force many companies to keep prices low — factors that didn’t exist during the high-inflation 1970s.

When the pandemic intensified nearly a year ago, the Fed pegged its short-term interest rate to near zero and began purchasing $120 billion in Treasury and mortgage bonds a month. The Fed has previously signaled that it intends to keep its rate near zero through at least 2023. And many analysts say they think the bond purchases won’t be tapered until next year.

Powell declined to comment on whether the brighter-than-expected economic outlook has altered any of the Fed’s timelines. But he did say he shared some of that optimism.

“There’s good reason to expect job creation to pick up in the coming months,” he said.