I am hopeful that our legislature shares my commitment for a better vision of safety in Florida. 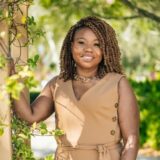 I am a Survivor.

I have been since I was just a teen. And like too many other Floridians, the way that I “show up” in the world is shaped by the weight of that experience — both my victimization as a young woman and my recovery in the aftermath.

As an adult, I was able to shift my pain into purpose.

I became a Licensed Mental Health Counselor, focused on helping other victims of crime. Like me, my patients have to work through the trauma of their experience.

Because of our lived experience, crime survivors have a deeper vision of public safety than just putting people away. Our goal is to see cycles of crime and violence effectively interrupted so that no one ever has to experience what we have gone through ourselves. We believe this so strongly that we’ve organized ourselves around it.

I am one of the 5,000 Florida members of Crime Survivors for Safety and Justice who know crime and violence firsthand. We are a network of people working to ensure the criminal justice system takes meaningful steps to keep people safe and to support healing and recovery after harm.

In 2019, we fully supported lawmakers as they passed the state’s most comprehensive criminal justice and public safety reform in over 20 years. HB 7125 included changes in probation practices, extended the time victims have to apply for victim compensation and made it easier for people with past convictions to find jobs that will help them remain stable and law-abiding members of society.

But because our criminal legal system has spent decades simply trying to arrest and imprison our way out of a problem, much more is needed.

That is why we are supporting legislators from both parties as they build on HB 7125 and introduce several additional reforms in the coming legislative session.

These measures will give Floridians more support for healing in the wake of serious crime, reduce the number of people who may be sent to prison for technicalities rather than for committing crimes and provide greater incentives for incarcerated people to participate in rehabilitative programming to help them become responsible members of their communities.

Florida already provides employment protection to victims of domestic violence so they can take time off from work following a violent event to address urgent issues like moving, assembling a safety plan, or getting medical support.

Senate Bill 1838 — along with the House companion bill, HB 1467 — would extend those protections to victims of other violent crimes. Too often, fear of losing their job compels victims of violence to return to work within days of being harmed or losing a loved one. This often compounds the trauma they have experienced and makes it more difficult to get adequate medical attention, ensure their safety, bury a loved one, or access victim’s services.

We also support building on the probation reforms the legislature created in 2019 to both increase public safety and also save taxpayer dollars.

The Council of State Governments recently calculated that Florida spends $330 million each year incarcerating people who have violated the conditions of their release. But many of those violations are either technical — such as missing a meeting or failing to report out-of-state travel — or extremely low-level violations, such as driving to work or church without a license.

Crime survivors do not want expensive prison resources used on people who are not causing harm in our communities. We also want people who have demonstrated their commitment to good behavior to be set up for success, not failure.

Strengthening the Alternative Sanctions Program would do just that.

Finally, we believe people should be held accountable for their actions.

For survivors, that means that there should be incentives for people in the justice system to do the right thing and rehabilitate oneself. Because research shows that incentivizing participation in rehabilitative programming reduces recidivism among people who will be eventually released, we hope lawmakers will make these credits more available in smart, targeted ways to promote rehabilitation.

I am hopeful that our legislature shares my commitment for a better vision of safety in Florida, one that promises to expand healing for crime survivors; reduces the use of prison for people who have not harmed anyone and provides incentives for people to come out of the justice system better than when they entered it.

Let us all work together to interrupt the cycles of crime and violence that continue to harm too many communities across our state.

LaDonna Butler is senior manager of the Crime Survivors for Safety and Justice based in St Petersburg.

previousHere’s Brunch, a pop-up, weekend email during the 2021 Legislative Session — 3.6.21

nextAlexandra Webb: How to reduce recidivism rates in Florida?