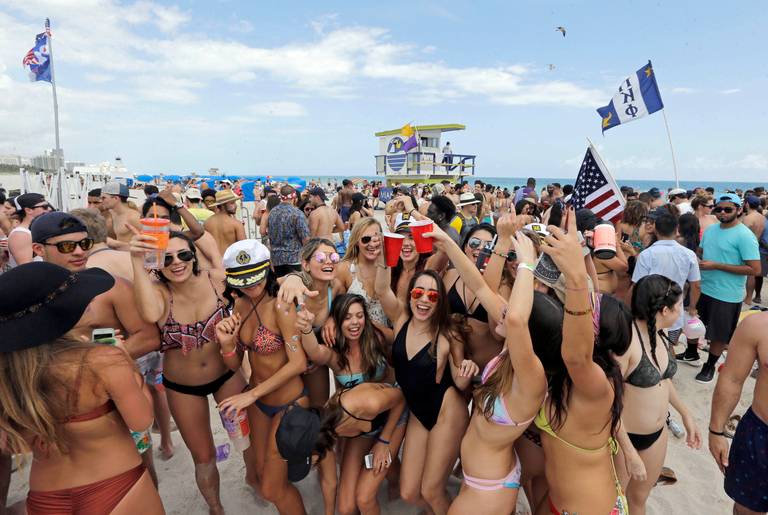 The decision came in response to a surge of Spring Breakers, who gathered by the thousands without masks or social distancing.

Miami Beach Interim City Manager Raul Aguila has declared a state of emergency throughout the city in consideration of the Miami Beach Police Department’s concerns relating to larger than expected Spring Break crowds.

Authorities reported hard partying Spring Breakers who trashed restaurants, brawled in the streets and gathered by the thousands without masks or social distancing.

In response to the rowdy crowd, and in an effort to protect public health, the Interim City Manager intends also implement several emergency measures, including an 8 p.m. curfew in the city’s “High Impact Zone.” The measures will be active for a period of up to 72 hours, unless determined otherwise by the Mayor and City Commission.

The zone affected is in the area bounded by 5 Street on the south, 16 Street on the north, Pennsylvania Avenue on the west and Ocean Drive on the east. The curfew will begin Saturday night.

The city will also be closing several roadways from 9 p.m. through 6 a.m.

Starting at 8 p.m. on Saturday, Ocean Drive will be closed to pedestrian and vehicular traffic, except to city residents, guests of hotels and employees of business establishments. Other public roads within the High Impact Zone may be closed as deemed necessary by the Interim City Manager or Chief of Police.

“I have never been more upbeat about the future of Ocean Drive and I am pleased that the City Manager is moving decisively to deal with challenges presented by Spring Break,” Jonathan Plutzik, Ocean Drive chair and owner of The Betsy Hotel, said in a news release. “Our issues are amplified by how uniquely attractive Miami Beach is as a destination.”

Restaurants in the High Impact Zone can remain open until 12 a.m. for delivery services only.

The city is strongly urging all businesses in the High Impact Zone to close voluntarily during the State of Emergency.

The Mayor has also called an emergency meeting of the City Commission on Sunday at 3 p.m. to discuss and take action with regard to the Declaration of a State of Emergency. Aguila told the Miami Herald that he recommends keeping the rules in place through at least April 12. A countywide midnight curfew was already in place due to the COVID-19 pandemic.