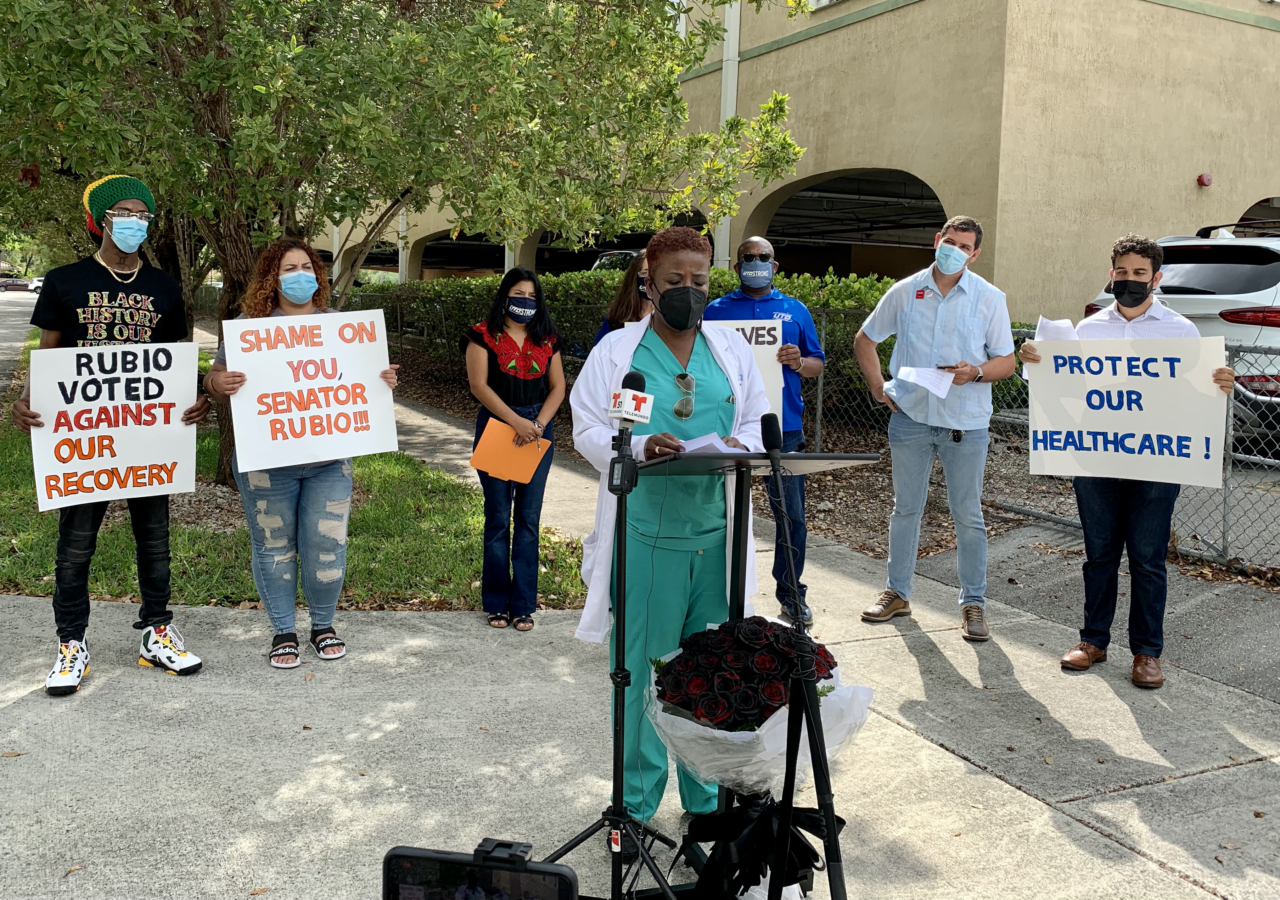 The coalition delivered 33 black roses to Rubio's office, representing the more than 33,000 lives lost in Florida from COVID-19.

The coalition of Floridians delivered 33 black roses to Rubio’s office during the meeting, representing the more than 33,000 lives lost in Florida from COVID-19.

Rubio joined 48 other Republican Senators in a party-line vote against the ultimately approved pandemic relief package, which President Joe Biden signed into law a little over a week ago.

“It is sad that Senator Rubio chose not to support this landmark legislation, which is the single largest investment ever in education funding,” said Karla Hernandez-Mats, president of United Teachers of Dade, at the conference. “We have lost so many folks here in Florida, especially here in South Florida, and so many teachers. And yet Senator Rubio has the gall to oppose this life raft of aid that our schools, our teachers, and our children so badly need.”

The group also shared disapproval over Rubio’s vote against confirming Biden’s nominee for Secretary of Health and Human Services, Xavier Becerra. The two also faced scrutiny from Florida physicians for this move.

“I’ve seen so many patients come through our hospital who had lost their healthcare because they lost their job from the pandemic,” said Carol Robley, a nurse-practitioner at Jackson Memorial and member of SEIU Local 1991. “He said ‘No’ to making sure that his constituents have access to affordable healthcare in the middle of a health crisis. And yesterday, Rubio wouldn’t even vote to get the new administration’s health care team in place, voting against the nominee, Xavier Becerra, to lead the country’s Health department.”

The group who met at Rubio’s office Friday join a wave of criticism faced by both Rubio and fellow Sen. Rick Scott for their lack of support for the overwhelmingly popular plan. Earlier this week, the DNC launched an ad campaign targeting the two Senators for their votes.

“Help is on the way,” the sign reads, “No thanks to Senators Rick Scott and Marco Rubio, who voted no.”

“Instead of supporting his constituents and helping, Senator Marco Rubio decided to play partisan politics and vote against the American Rescue Plan and against our recovery,” said William Miller, director of Protect Our Care Florida. “After 33,000 lives have been lost here in Florida, and hundreds of thousands of folks unemployed, Senator Rubio––and his colleague Senator Rick Scott, along with the Republican delegation from South Florida––should be ashamed of their votes.”

nextWinner and Loser of the Week in Florida politics — Week of 3.14.21