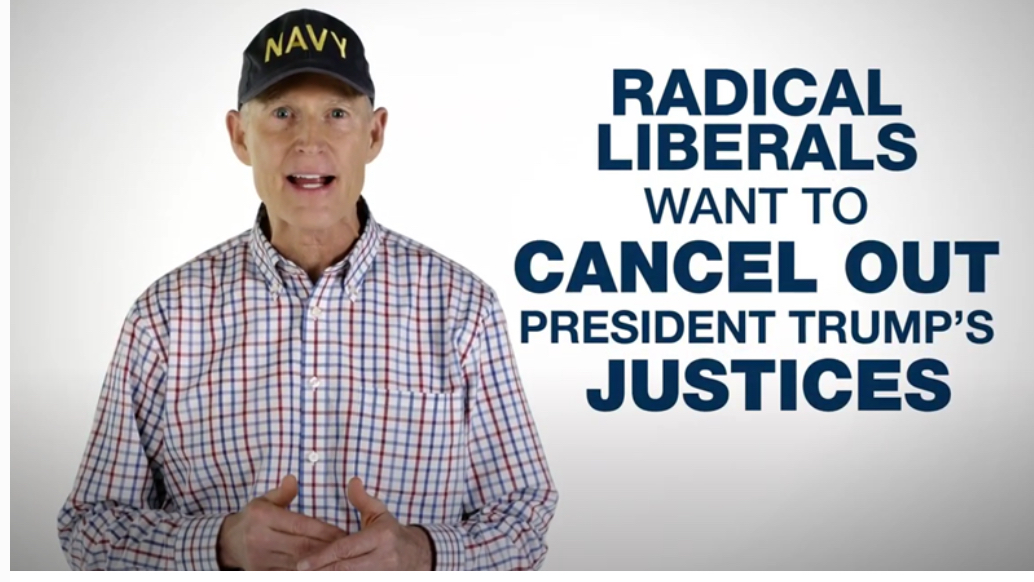 But don’t worry, the footage is safe for work: the subject is the Supreme Court, currently at nine members, but who knows for how long.

“Chuck Schumer and his posse know that the only way to fundamentally change America with their radical agenda is to alter the 152-year tradition of nine Supreme Court justices,” asserts the lead-in to the video.

Underneath a graphic describing “the supreme thuggery of Democrat’s (sic) court packing,” the Senator from Florida blasted Democratic proposals to expand the panel.

“They plan to cancel out judges appointed by President Trump and pack the Supreme Court with radical liberals,” Scott contended. “It’s the kind of thing you’d expect in Cuba and China.”

Scott then posed a leading question: “Why do Democrats want a kangaroo court?”

“It’s simple,” Scott answered. “Because their radical plans are unconstitutional and they know it.”

Scott vows that the NRSC is going to “put an end to the madness,” specifically by defeating Democrats in 2022.

The Senator has messaged on this issue in recent days, using similar rhetoric.

“This is just part of the Democrat power grab. You know, they want to pack the Supreme Court so they can get some activist judges that are gonna back their, you know, insane left-wing agenda,” Scott said on Fox News last week.

Before the election, he warned about potential expansions of the court also.

Scott, of course, had sought to appoint justices to the Florida Supreme Court after his term technically lapsed as Governor in 2018. Ultimately, however, it was ruled the move would have exceeded his constitutional authority.

“The Governor who is elected in the November 2018 General Election (most likely Democrat Andrew Gillum or Republican Ron DeSantis) has the sole authority to fill the vacancies that will be created by the mandatory retirement of Justices Barbara Pariente, R. Fred Lewis, and Peggy A. Quince,” the court’s one-page unsigned order said.

nextJohn McDonough: Ambiguous titles for health providers are not good for patients