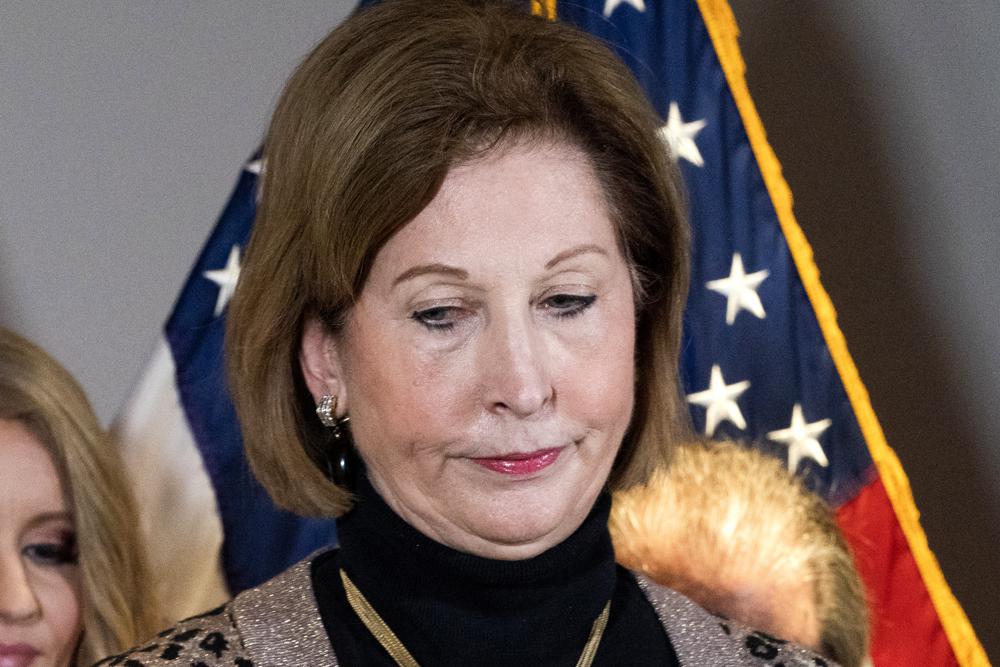 “There is a great deal of money to be made in promoting and catering to QAnon."

Former Trump attorney and self-proclaimed “Kraken releaser” Sidney Powell has told prospective donors that her group, Defending the Republic, is a legal defense fund to protect the integrity of U.S. elections.

But the company suing Powell over her baseless claims of a rigged presidential election says the true beneficiary of her social welfare organization is Powell herself.

Dominion Voting Systems claims Powell has raided Defending the Republic’s coffers to pay for personal legal expenses, citing her own remarks from a radio interview. The Denver-based voting technology vendor sued Powell and others who spread false claims that the company helped steal the 2020 election from Donald Trump.

“Now, Powell seeks to abuse the corporate forms she created for her law firm and fundraising website to hide funds that she raised through her defamatory campaign, shielding those funds from the very company that was harmed by the defamatory campaign,” Dominion lawyers wrote in a May 5 court filing.

The dispute shines a light on how Trump allies continue to support, spread and allegedly profit from lies about fraud in the 2020 election. Although the election is settled, and all major court challenges have been dismissed, Powell’s legal defense fund continues to raise money, with help from conspiracy-minded supporters like QAnon adherents.

Her group will receive a cut of proceeds from ticket sales for a Memorial Day weekend conference in Dallas called the “For God & Country Patriot Roundup,” the event’s website says. Some leading purveyors of far-right conspiracy theories are headliners, including Powell, pro-Trump attorney Lin Wood and former national security adviser Michael T. Flynn.

Event organizer John Sabal, known as “QAnon John” to followers of the QAnon conspiracy theory, declined to explain the decision to financially support Powell’s nonprofit, also known as DTR, but said the money isn’t for her personal benefit.

“As far as I know, DTR is benefiting a bunch of different causes. Those I will not speak on, but you can talk to her about that,” he said.

Powell didn’t respond to interview requests, but one of her attorneys said she denies Dominion’s accusations. Powell’s personal legal bills are covered by her malpractice carrier, and her nonprofit has a proper corporate structure with a board of directors, said her lawyer, Howard Kleinhendler.

“She does not have unfettered control over its funds or how the funds are spent,” Kleinhendler wrote in an email. “DTR intends to comply with all federal and state filing requirements when they are due. At that time you as well as the rest of the world will see the necessary financials.”

Trump and his allies filed more than 50 lawsuits in multiple states over the election and lost at every turn. Powell and Rudy Giuliani were among the lawyers behind the cases claiming a conspiracy by Democrats, despite Republican state leaders, and Trump’s own attorney general and other administration officials, publicly stating there was no major election fraud. Powell appeared with Giuliani at a press conference and made multiple TV appearances.

But after Powell threatened to “blow up” Georgia with a “biblical” court filing, the Trump legal team distanced itself from her, saying she was not working on their behalf. She later made the comment on how she would release “the Kraken,” an apparent reference to the film “Clash of the Titans” in which Zeus gives the order to release the mythical sea monster.

In a November interview, Powell noted she was not being paid by the Trump campaign but “by the people of the United States of America.”

Tickets for the Dallas conference cost $500 for general admission and $1,000 for VIP passes. The event’s website doesn’t name other beneficiaries or specify how much money goes to Powell’s nonprofit. Much of the conference was supposed to be held at a complex called Gilley’s Dallas, but Sabal said the venue canceled his booking after news coverage of the event’s QAnon connections.

Logan Strain, a conspiracy theory researcher who co-hosts the “QAnon Anonymous” podcast, said Powell has appeared on QAnon promoters’ YouTube channels and is viewed as a “hero of the republic” among QAnon followers. It wouldn’t surprise Strain if Powell is trying to harness the movement as a fundraising source.

“There is a great deal of money to be made in promoting and catering to QAnon,” he said. “This is why a lot of people suspected it was sort of a money-making grift, at least in part, from the beginning.”

Defending the Republic describes itself as a 501(c)4 nonprofit, but it isn’t listed in an IRS database of tax-exempt organizations. Groups recognized by the IRS as a 501(c)(4) are exempt from paying taxes on income, including donations, but those donations aren’t tax deductible as charitable contributions.

Powell’s website says donors can mail checks to an address in West Palm Beach, Florida, that corresponds with a UPS Store. Under the same address, Defending the Republic Inc. registered in February with Florida’s Division of Corporations as a nonprofit formed for “social welfare purposes.”

Records link other leading conspiracy theorists from Trump’s orbit to Powell’s nonprofit. Powell, Wood, Flynn and Flynn’s brother, Joseph, were named as directors of Defending the Republic in December 2020 filings with the Texas secretary of state’s office.

Joseph Flynn said in a text message that he’s no longer a director but declined to explain why.

“We are not interested in talking to the fake news media,” Flynn wrote.

Wood recalls Powell asking him to serve as a director, but said he hasn’t done any work on the nonprofit.

“She didn’t follow up with me about it,” he said,

Articles of incorporation filed in Florida in February listed MyPillow founder and CEO Mike Lindell as a director. But Lindell said he asked to be removed as a director of Defending the Republic after less than one week because he decided to form his own legal defense fund. Lindell is also being sued by Dominion.

“I went on my own because I don’t have time for other people’s stuff. I want to focus on what I’m doing,” Lindell said.

Defending the Republic’s chairman and CEO is former Overstock CEO Patrick Byrne, whose comments about the “deep state” led to his resignation from the company in 2019.

To support its claim that Powell is using nonprofit money for her personal legal defense, Dominion cited her remarks during a Dec. 29 appearance on “The Rush Limbaugh Show.” Powell told the radio show’s guest host that listeners could go to her website to donate to the nonprofit “that is working to help defend all these cases and to defend me now that I’m under a massive attack from the attorney general of Michigan and the city of Detroit and everything else.”

Michigan’s governor, attorney general and secretary of state — all Democrats — have urged state bar officials in Texas and Michigan to permanently disbar Powell for ethical violations over election lawsuits.

Wisconsin Gov. Tony Evers, a Democrat, asked a federal court to order Powell and other lawyers who challenged Wisconsin’s election results to cover $106,000 in state legal fees. Powell called it a frivolous request. A judge hasn’t resolved the dispute yet.

Dominion sued Powell in federal court on Jan. 8, seeking over $1.3 billion in damages against her, her law firm and her fundraising website. The company claimed Powell treated Defending the Republic “as her personal funds, redirecting them to the law firm she controls and dominates … and raiding them to pay for her personal legal defense.”

A nonprofit organized under Section 501(c)(4) of the tax code, as Defending the Republic claims to be, can engage in some political activities provided that’s not its primary activity. Unlike political committees, tax-exempt social welfare groups don’t have to disclose donors. Forms notifying the IRS of a group’s intent to operate as a 501(c)(4) aren’t public records, according to an IRS spokesman.

Samuel Brunson, a tax law professor at Loyola University in Chicago, said the IRS bars 501(c)(4) groups from spending money for the benefit of private individuals. Doing that could jeopardize its tax-exempt status, he added.