Disney World workers have something to celebrate, Matt Gaetz not so much.

Normally, we start our weekly session of Winners and Losers with a short, one-topic commentary before we get down to business.

However, we just went through a really strange week, so if you pardon us, we’ll change the usual format so we can cast a wider net.

“We are a big tent party. We represent Americans of all backgrounds and continue to grow our movement by the day. And unlike the left, we embrace free thought and debate. All members are elected to represent their constituents as they see fit, but our leadership team cannot afford to be distracted from the important work we were elected to do and the shared goals we hope to achieve.”

The message was clear. House Republicans have the freedom to think however they want, as long as they agree with leadership.

Get back to work, you slackers: Florida U.S. Sen. Rick “Let’s Get To Work” Scott continues to rail against what he believes are overly generous unemployment benefits.

He has called for an end to the $600 weekly federal pandemic unemployment payment, which is an addition to state benefits for those without work.

In a commentary for Fox News, Scott wrote that it means people make more money “by not working than they would make if they had a job.”

Well, maybe if those folks had jobs that paid a living wage, they might go back to work.

Florida’s $275 weekly unemployment payment — that is when people can actually get it — works out to $6.87 per hour. Oh, by the way, thanks for that catastrophic state unemployment computer system when you were Governor, Sen. Scott.

Quote of the Week from the Dolt of the Weak: Georgia U.S. Rep. Andrew Clyde.

“Let me be clear, there was no insurrection, and to call it an insurrection, in my opinion, is a bold-faced lie. Watching the TV footage of those who entered the Capitol and walked through Statuary Hall showed people in an orderly fashion, staying between the stanchions and ropes taking videos and pictures, you know,” he said.

“If you didn’t know that TV footage was a video from January 6th, you would actually think it was a normal tourist visit.”

Well, except for the five people who died. And the 140 Capitol Police officers injured in the … say it with me … INSURRECTION!

Oh, and this is Rep. Clyde’s idea of a “normal tourist visit.” 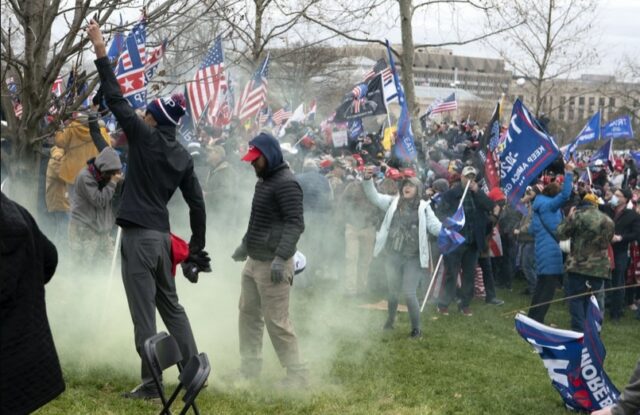 “I think they’ve been treated poorly,” he said. “Fortunately, they got a Governor that cares.”

Maybe. But there also is this virus that showed a stunning lack of remorse.

Hey, has anyone seen my AR-15?: The Miami Herald reported that the Miami Police Department couldn’t account for more than two dozen semi-automatic rifles.

For now, the Department attributes it to bad record-keeping about which officers have the weapons.

OK, on with the show.

Honorable mention — Wilton Simpson: Florida’s Senate President and egg farmer from Trilby received an endorsement from the Big Guy himself, Trump. It’s for the job of Agriculture Commissioner in 2022.

Now, all he has to do is decide he wants to run for that post, currently held by Democrat Nikki Fried.

A long-running rumor is that he does want that job.

“Wilton Simpson has done an outstanding job as President of the Florida State Senate, and I hope he runs for Florida Agriculture Commissioner in 2022 – he will have my Complete and Total endorsement!” Trump said in a statement.

Great, although Simpson called the endorsement “an honor,” but said he hasn’t decided to run.

If you believe that, I’ve got some beachfront property in Nebraska that you should consider.

Almost (but not quite) biggest winner — Private school vouchers: Here’s how we play the game of Winners and Losers here. It’s not necessarily whether the author agrees with the outcome, but rather were those who advocated for something successful.

In other words, it’s back in my sports writing days. The team I might have wanted to win didn’t always do that, but we had to report the news anyway.

So it is with this.

DeSantis signed a $200 million bill into law that allows the families of about 61,000 students to receive taxpayer-funded private and charter school vouchers.

The Governor said it would create “more opportunities for more students and more families.”

It also drains money desperately needed by public schools and redirects it, in some cases, to private schools that play by a different set of rules.

DeSantis signed the bill at St. John the Apostle Catholic School in Hialeah, a school that, the Orlando Sentinel reported, “relies heavily on state scholarships to cover student tuition.”

Your tax dollars at work.

The biggest winner — Disney World: The happiest place on Earth just got a lot happier.

The entertainment giant in Orlando plans to raise park capacity beyond the current 35%. Although it didn’t say how large the increase will be, it’s a significant step.

The company also recalled thousands of workers after laying off 18,000 last year because of the pandemic.

And the CDC’s new relaxed guidelines about wearing masks are cause for a good old-fashioned Disney parade. CEO Bob Chapek called it “big news” for the company.

“Anybody (who has) been in Florida in the middle of summer with a mask on, that can be quite daunting, so we think that’s going to make for an even more pleasant experience,” the Sentinel reported Chapek said on an earnings call.

“You’re going to see an immediate increase in the number of folks that we’re able to admit into our parks, through our reservation systems that we recently implemented, so we’re very, very excited about that.”

But who’s going to serve all the diners?

Staffing is at a dangerously low level at many Florida eateries, and hiring new workers is a real problem. A Tampa McDonald’s offered $50 to anyone who showed up for an interview.

Many restaurant owners target the $600 weekly federal unemployment assistance from the federal government, which expires in September. They say that, combined with Florida’s $275 weekly unemployment, means those laid off can make $875 a week by not working.

There is another theory, though.

Putting the onus on the unemployed doesn’t tell the full story.

“What (restaurants) don’t tell you is they can’t find workers at the wages they’re willing to pay,” Scott Brown, chief economist at Raymond James Financial, told the Tampa Bay Times.

Almost (but not quite) biggest loser — Gas panic-buyers: When hackers shut down a major fuel pipeline last week, long lines of cars showed up outside gas stations throughout the southeast. Many stations ran out of petrol, including here in Florida.

Florida doesn’t get its fuel supply from that pipeline. Tankers bring in the fuel to Florida ports. Numerous officials, elected and otherwise, told them this.

Stupid is as stupid does, though. Motorists staged a major run on fuel pumps, so, of course, we had a shortage.

Many aggravating stories came out of this episode, but probably none more bizarre than the driver who took the words “fill ‘er up” too far.

After stuffing four 5-gallon cans of gasoline into the back of a 2004 Hummer H2 in Homosassa, the driver watched the vehicle become engulfed in flames.

The biggest loser — Matt Gaetz: It might just start getting real for Florida’s representative to its 1st Congressional District.

His (we can assume) former friend, disgraced ex-Seminole County Tax Collector Joel Greenberg, admitted on Friday in court documents that he is guilty of a smorgasbord of charges, including sex trafficking a minor.

Greenberg agreed to cooperate with a federal probe looking into this issue. That’s where Gaetz could come in.

Multiple reports linked Gaetz with some of Greenberg’s antics.

The New York Times reported Greenberg told investigators that Gaetz had sex with the girl in question.

Gaetz has vehemently denied all the accusations, and Greenberg’s credibility is suspect at best. He abused his office by admittedly stealing money from local taxpayers and committing identity theft, but that’s not all.

A judge revoked Greenberg’s bail in March for noncompliance with his release terms.

Greenberg also knows, though, that if anything he tells prosecutors under oath doesn’t pan out, any hope of a lighter sentence gets smashed.