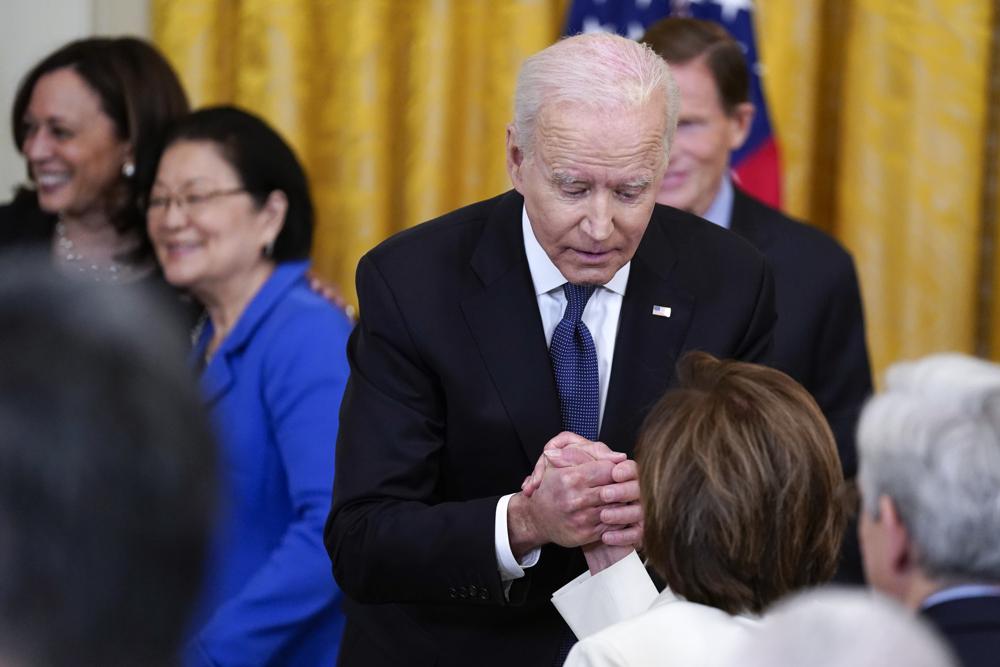 Capacity is slated to go to 50 percent soon, with the goal of a full return by summer.

A smiling crowd of unmasked people filling the largest room in the White House. A visiting head of state welcomed with pomp, circumstance and handshakes. A 94-year old Medal of Honor recipient receiving a joyous hug from Vice President Kamala Harris.

The White House is springing back to life.

Thanks to growing availability of the coronavirus vaccine and a recent relaxation of federal guidance on masks and distancing, the Biden administration is embracing the look and feel of pre-pandemic days on Pennsylvania Avenue. More West Wing staffers are turning up there for work and more reporters will be doing so as well, as the White House spreads the message that a return to normal is possible with vaccinations.

There are lingering concerns about safety and mixed messaging — the same contradictions and confusions that are popping up across a nation that is gingerly re-opening. But the images of a reopened, relaxed White House stand in striking contrast to the days when it was the site of several COVID-19 outbreaks last year, a sign of just how far the pandemic has begun to recede in the United States.

“We’re back,” White House press secretary Jen Psaki declared at Friday’s daily briefing. “I can confirm we’re a warm and fuzzy crew and we like to hug around here.”

The changes within the White House over the past week were swift and sweeping. Hugs were in, masks were (mostly) out. There was no need to stand six feet apart. And no one seemed to enjoy the shift more than President Joe Biden, the most back-slapping and tactile of politicians.

The president had been happy to announce the relaxed mask guidance when he appeared in the Rose Garden on May 13 without a mask, just hours after the CDC said those who are fully vaccinated don’t need to wear masks in most settings. That cheerfulness carried over this past week into a series of larger public events that would have been out of bounds earlier in Biden’s presidency.

For the second straight day, the White House on Friday opened the East Room –- the executive mansion’s largest room –- to scores of outside guests. Smiling broadly, Biden awarded the Medal of Honor for the first time as commander in chief, giving it to 94-year-old retired Col. Ralph Puckett Jr. for acts of bravery during the Korean War some 70 years ago.

The White House timed Friday’s ceremony to coincide with the visit of South Korea’s president, Moon Jae-in, who joined Biden at the event before their policy meetings. Both world leaders repeatedly clasped Puckett’s hands and crowded in for a photo with the war hero’s extended family.

A day earlier, an even larger group of lawmakers and other guests were on hand to witness Biden sign legislation to counter an alarming spike in crimes against Asian Americans and Pacific Islanders. House Speaker Nancy Pelosi and Sen. Susan Collins were among the lawmakers trading hugs and kisses.

“The nicest part is being able to shake hands again and to see people’s smiles,” Collins marveled at one point.

Afterward, lawmakers who helped shepherd the legislation through Congress surrounded Biden as he signed the measure into law. The president also engaged in an act that had largely disappeared from official Washington during the pandemic: He shook hands with a few guests before leaving.

Earlier that day, he had welcomed the newest Kennedy Center honorees to the White House for a visit that marked the return of celebrity wattage to the property.

By multiple accounts from Kennedy Center Honors recipients, the White House event was high-spirited, with Biden seemingly thrilled to have visitors.

Debbie Allen called the president, “so engaging and open. He spent a lot more time with us than I expected.”

Joan Baez said the official visit “turned into a jolly romp,” included a tour of the Rose Garden and culminated in Baez singing for Biden.

Due to social distancing guidelines, the number of journalists allowed inside the White House shrunk once the pandemic hit, with the briefing room only about a quarter full for Psaki’s daily question-and-answer sessions.

Capacity is slated to go to 50 percent soon, with the goal of a full return by summer. The daily COVID-19 testing requirement for staff and most journalists was also expected to soon be waived for the fully vaccinated. And the parking spaces around the West Wing and Eisenhower Executive Office Building have been fuller as of late.

Psaki said the effort to return to a more normal vibe was part of “continuing to open the White House up, the people’s house up to the American people.”

But questions remain about protocol.

Abiding by the safety guidelines is a matter of the honor system. And Psaki acknowledged Friday that the White House did not have plans to verify vaccination status. Members of the administration and the Centers for Disease Control and Prevention have continued, at times, to offer confusing guidance on exactly when, and by whom, a mask should still be worn.

Yet in most ways, the mood has changed dramatically.

The first image that Americans saw of Biden at the White House as president was on Inauguration Day, as he sat behind the Resolute Desk in the Oval Office wearing a mask. Aiming to draw a stark contrast with the Trump White House, which took a cavalier attitude toward the virus within the building, the Democratic administration consistently erred on the side of caution, at times exceeding precautions recommended by the CDC.

For months, Biden had privately groused that the pandemic prevented him from having face-to-face meetings with lawmakers and world leaders alike, and he chafed at having to conduct diplomacy by Zoom.

On Friday, the White House unfurled all of its traditional in-person pageantry for Moon’s visit and the two men were able to sit across from each other in the State Dining Room and, later, answer questions before a mask-free audience of diplomats, officials and reporters.

Moon had opened his day with a visit to Harris’ office in the White House complex, where the two stepped out on a balcony for a quick wave. The sun was shining. Smiles were everywhere. There wasn’t a cicada in sight.