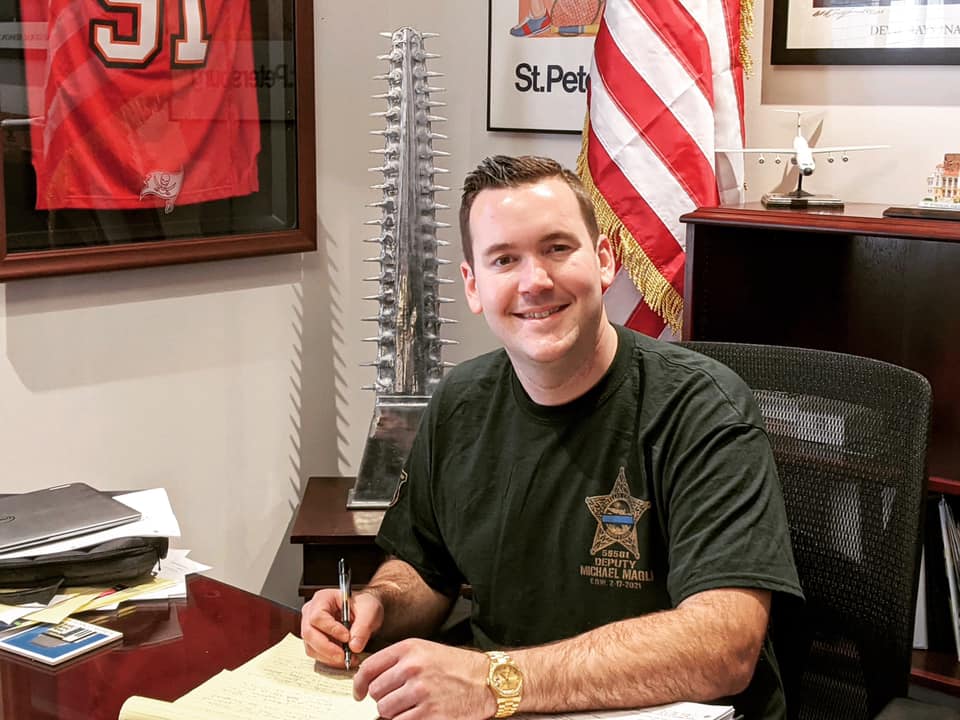 He won't condemn Trump. That's a positive, and a negative.

When St. Petersburg City Council member Robert Blackmon filed to run for Mayor last week it rewrote the political calculous in the race.

Prior to his entrance, conventional wisdom held that it was a race between Blackmon’s colleague, Darden Rice, and former Pinellas County Commissioner Ken Welch. The two were expected to carry the most votes in the Aug. 24 Primary Election and then head to a runoff Nov. 2.

With that expectation, voters had two frontrunners who are both Democrats. Blackmon, a Republican, adds a conservative dynamic to the race, setting up what could potentially be a more partisan contest and claiming a lane that could bump either Rice or Welch from the top-two in August.

But, Blackmon enters the race with just two years under his belt as an elected official. And at just 32, he’s the youngest Council member to ever serve in St. Pete. So it begs the question: Can he get it done?

In an hour-long conversation with Florida Politics last week, Blackmon showed both the ability to appeal to conservative voters otherwise left without a viable option in the race while maintaining his moderate charm, and room to grow in his political experience.

Being a Republican in a citywide race is no easy task. Rick Baker, who had years of experience on Blackmon as a former Mayor and a beloved city icon, couldn’t pull off a victory in modern day St. Pete where the electorate trends more blue every year.

Political watchers in the city attribute, at least in part, Baker’s loss to Mayor Rick Kriseman in 2017 to the Donald Trump effect. Baker refused to condemn the then-President and his controversial brand of in your face political rhetoric.

Blackmon might be heading down the same road. He declined to say whether he voted for Trump and, like Baker, didn’t condemn the firebrand populist Republican.

It was likely a strategic answer. If Blackmon condemned Trump, he could potentially lose support from St. Pete’s conservative base. Instead, he condemned Trumpism without disavowing the man himself.

“I don’t condone any type of hatred, hate speech or discrimination,” Blackmon said.

Blackmon did firmly acknowledge President Joe Biden‘s victory in the 2020 election, which he said was fair, and said he supports his administration, as he does with other administrations including Kriseman’s locally and Gov. Ron DeSantis‘.

Still, with two candidates now at risk of losing a spot in the November General Election, Blackmon is almost certain to face negative campaigning based on his political affiliation. In answering to that, Blackmon also showed how difficult it will be to fight back against attacks coming from top tier candidates, or outside groups backing them.

For example, Blackmon endorsed Republican Stephanie Meyer for Pinellas County School Board in the 2020 election. It was no secret Meyer was a Trump Republican. And she carried the conservative torch on education policy. A private school educator herself, Meyer was an unabashed supported of school choice.

That endorsement is likely to be a target. Explaining his endorsement, Blackmon said he thought she seemed like a nice person.

“I didn’t know her that well, I didn’t follow her policies. I just didn’t know the person she was running against,” Blackmon said in an answer that could further illicit criticism.

But while Blackmon faces a number of challenges, he also has plenty to offer voters.

In his two years on Council, he has been a reliably moderate voice, which could help counter any partisan backlash he faces. Blackmon ran on several policies Democrats in the city could get behind including affordable housing, the environment and rebuilding, not demolishing, the St. Pete Science Center. For the most part, he’s followed through with those policies.

Blackmon has proposed, and there’s been some movement, on several affordable housing initiatives, including giving away the city’s Sunshine Center to a developer to tackle multiple problems. His plan, he explained, would allow the Sunshine Center to get a complete rebuild on a developer’s dime, while also providing affordable housing units in an attached vertical tower.

“That would give us a new facility for our seniors for free while putting new housing units on the city’s tax rolls,” Blackmon said.

Under the plan, 30% of the new units would be set aside for affordable housing, with the remaining units available at market price.

“What you’re doing is taking low-income earners and taking them out of homelessness,” Blackmon said.

He also offers out-of-the-box thinking on the city’s struggling Southside neighborhoods, including around the Tangerine Plaza shopping center, home to two shuttered grocery stores. Under Blackmon’s proposal, the city would use land it already owns to create a municipal services center. With the hundreds of employees that facility would house, the community would have the purchasing power it needs to support a new grocery store in a neighborhood that historically hasn’t been able to keep one afloat.

Blackmon also wants to shake up City Hall, a change many voters in St. Pete would likely welcome regardless of party affiliation. That includes an open-door policy for members of City Council to discuss ongoing business items.

“In the two years I’ve been on Council, I’ve never gone through those double doors,” Blackmon said, referring to the Mayor’s office on the opposite side of the building from Council offices.

“By opening that communication, we could have so many fewer new business items and much shorter City Council meetings,” he added, noting his desire to make city governance more efficient.

The Mayor’s race is likely to heat up after Memorial Day weekend as the August Primary enters the frame in less than three months.

For now, Blackmon’s entrance into the race hasn’t prompted too much buzz, because it’s still early in the world of city campaigns. But once the campaigns get heated in the coming days, more will become clear about the dynamic Blackmon brings to the race and what that means for the more established candidates.

Blackmon will also have a lot of ground to cover with fundraising. While he just entered the race and is only just getting started with his fundraising efforts, Rice and Welch have had plenty of time to rake in the cash.

Rice began raising funds in early 2019 and has brought in nearly $650,000 as of the end of April between her committee, Friends of Darden Rice, and her official campaign account.

Meanwhile, Welch began raising funds in late 2019 and brought in about $282,000 between his committee, Pelican PAC, and his official campaign account.

previousClock is running for 2022 candidates in Northeast Florida

nextWhat to do about compulsive gambling? Maybe next year, say lawmakers