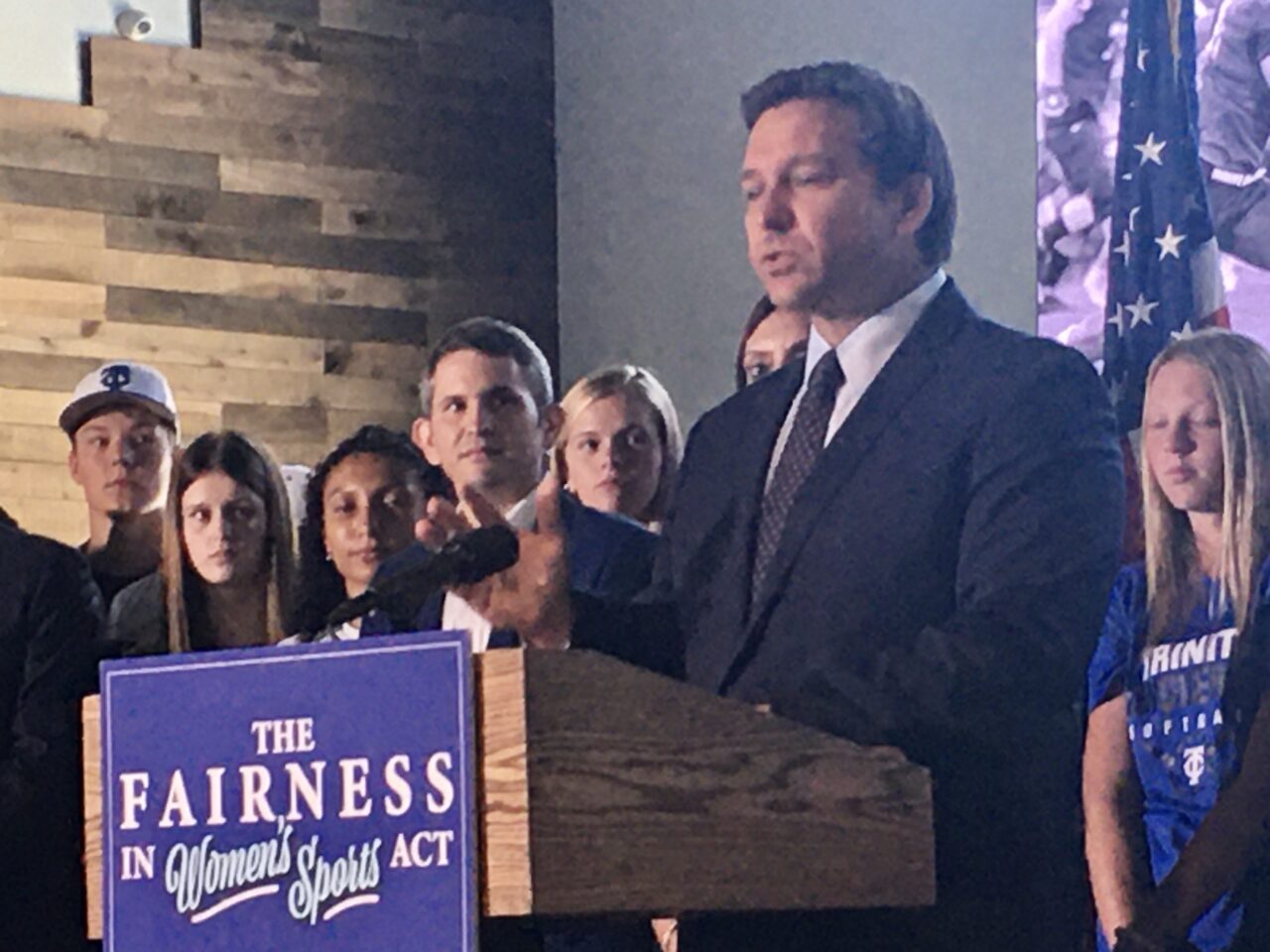 At a Christian school on Jacksonville’s Westside, Gov. Ron DeSantis, on the first day of Pride Month, signed Senate Bill 1028, a bill that bans transgender athletes from participating in women’s sports.

The bill will make female athletes’ eligibility for sports teams contingent on their “biological sex” on birth certificates issued “at or near the time of the student’s birth.”

“First of all, it’s not me saying anything other than we’re going to protect fairness in women’s sports. We believe that it’s important to have integrity in the competition. And we think it’s important that they be able to compete on a level playing field,” DeSantis said, as applause drowned out his answer, and the Florida Politics reporter who asked the question was hustled to the back of the room by a staffer.

DeSantis, surrounded by student-athletes from the school and flanked by myriad state legislators, said the legislation was “protecting the fairness and the integrity of female athletics.”

Within an hour of DeSantis signing the bill, the Human Rights Campaign announced it intends to file a lawsuit challenging the new law.

“Gov. DeSantis and Florida lawmakers are legislating based on a false, discriminatory premise that puts the safety and well-being of transgender children on the line,” Human Rights Campaign President Alphonso David said in a statement.

Under the bill, female athletes who have been discriminated against have recourse to civil remedies in the legislation, and the goal is to avoid “blatantly unfair track races” and the like.

DeSantis also saber-rattled at the NCAA, which is opposed to trans sports ban legislation and has pulled events elsewhere.

DeSantis, a major supporter of sports by almost any metric, vowed to “stand up to groups like the NCAA who think they can dictate” how Florida runs its athletic events.

“We won’t be cowed,” DeSantis promised.

“If the price of that is we lose an event or two, I would choose to protect our young girls every day of the week and twice on Sunday,” DeSantis said.

The new law would give colleges and universities a cause of action to file lawsuits “against the governmental entity, licensing or accrediting organization, or athletic association or organization” if they suffer “direct or indirect harm” related to violations of the law.

During the Legislative Session, opponents of the bill pointed to lack of complaints in Florida about participation of transgender student-athletes in sports. At Tuesday’s event, Republicans enlisted the help of a student-athlete from Connecticut in trying to make the case for what’s dubbed the “Fairness In Women’s Sports Act.”

“Sports have always had separate rules to ensure fairness. Everyone should have the chance to participate in sports, but they need to compete where it’s most fair,” said Selina Soule, a track-and-field athlete who was part of a group that sued the governing body for Connecticut high-school sports.

Florida Senate Democrats, however, criticized the legislation as being purely political and not aimed at solving a real problem.

“By folding the transgender ban into the charter school legislation, Republicans in Tallahassee rejected both science and reason, openly attacking vulnerable LGBTQ+ children without a single shred of evidence that a problem even exists,” the Senate Democratic caucus said in a prepared statement.

The ban appeared dead until it was added as an amendment to a bill regarding charter schools. That bill proved a vehicle for a controversial bill that wasn’t moving in the Senate.

Ironically, SB 1028 will require cleanup. The language of this bill bans student-athletes from monetizing their name, image, and likeness until July 2022. DeSantis, noting that college coaches have told recruiters of the benefit, said another bill he will sign will move up the date of the NIL legislation to July 1, 2021.

previousLast Call for 6.1.21 — A prime-time read of what’s going down in Florida politics