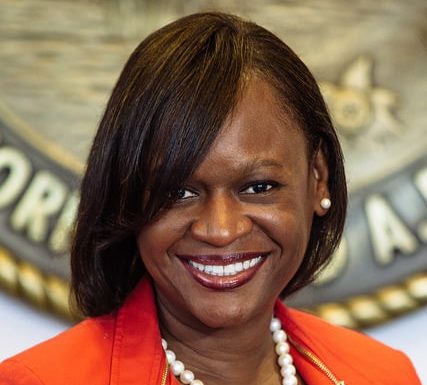 With her boss out of the running, Tomalin sees a lane for her next move.

“When Mayor (Rick) Kriseman was thinking about doing it, {I was] behind him 100% because he’s been such an effective leader, and I know what he would’ve done in D.C.,” Tomalin told Spectrum Bay News 9. “But now that he’s decided that he’s not in, absolutely it’s a consideration.”

Tomalin’s decision is by no means final, but the news got her, and her family, thinking. As someone with an eye for public service, the move would fit Tomalin well, though it would challenge her desire demonstrated so far in public office to stay largely out of the lime light.

“I think I would bring great insight about the ways leadership in Washington, D.C. can make a difference for people in their everyday lives right here at home — Issues like the environment, issues like transportation infrastructure, equity expansion of health care,” Tomalin told the outlet. “So many of those decisions unfold in Congress, and I think I can bring in knowledge of this community and take it to the next level.”

Tomalin, a Democrat, would bring with her to the race a compelling story. She began her career in journalism, spent years working as a hospital executive and then was tapped to be Kriseman’s No. 2 as deputy mayor, later also being tasked with serving simultaneously as city administrator, the top non-elected post in the executive office.

But with the end of Kriseman’s tenure, hers too is drawing to a close. Kriseman created the deputy mayor position for Tomalin and later took what was to some a controversial step to also name her city administrator. But she has carried both duties well, by most accounts, and has made a name for herself independent of Kriseman, including through leadership on city wellness initiatives.

Tomalin’s children are also sixth generation St. Pete residents, giving her a hometown claim not unlike CD 13 incumbent Charlie Crist, who Tomalin’s oldest son, Kai, once interned for. Those roots span large chunks of the city, and important voting blocs.

But she now lives in West St. Pete, and attends church in Snell Isle. Both connections give Tomalin familiarity among Republicans who could be crucial in a 2022 CD 13 bid, a district that is already purple and could shift even more toward the GOP after redistricting this year. Snell Isle is home to wealthier neighborhoods with both Democrats and Republicans, and West St. Pete is home to City Council District 1, one of only two districts in the city with a Republican voter registration edge, albeit small.

And no conversation about Tomalin would be complete without acknowledging her late husband, beloved Tampa Bay Times outdoor writer Terry Tomalin. Tomalin has publicly acknowledged her family’s challenges with her husband’s untimely passing, endearing her to city residents across the political spectrum. Her story is one of perseverance and unwavering love, even in death.

If Tomalin does run, she would face a competitive Democratic primary. Rep. Ben Diamond, who had been slated to be the top Democrat in the Florida House of Representatives before jumping into the CD 13 race last month, carries arguably about the same name recognition she would most. And Eric Lynn, a former Obama administration staffer, has an impressive resume in national security to tout, which could draw crucial bipartisan support.

If she earned her party’s nomination, Tomalin would face another challenge in Republican Anna Paulina Luna, a firebrand conservative and diehard Trump supporter who fared better than expected against Crist in the 2020 election.

For now, her next move is a question mark, but for St. Pete residents, it’s certainly worth watching.

Tomalin tweeted thoughts on her next move following news she was considering a run.

“Serving our wonderful city as Deputy Mayor and City Administrator alongside Mayor Rick Kriseman has been one of the highest honors of my life. As our time of shared service nears its end I’m contemplating my next chapter,” she wrote.

One thing is certain: however my story continues it will be for the love of our community and in the service of all the awesome people who make it shine. I love our community and am blessed with work that gives as much as it takes.

Serving our wonderful city as Deputy Mayor and City Administrator alongside Mayor Rick Kriseman has been one of the highest honors of my life. As our time of shared service nears its end I’m contemplating my next chapter. https://t.co/6d3MaTare5

nextJoe Henderson: Maybe it's time to pull the plug on TBARTA