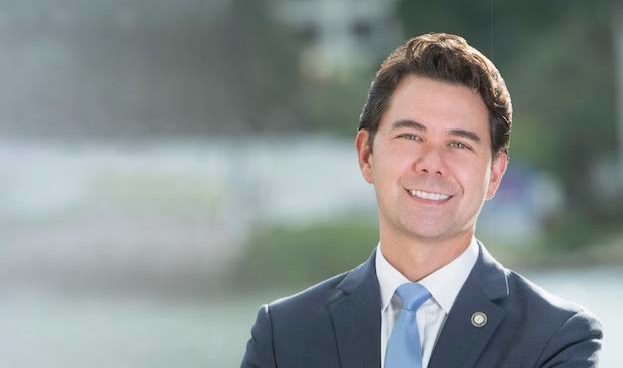 Russell will first have to get through a Democratic field that's expected to include U.S. Rep. Val Demings.

Ken Russell is hoping to jump from the Miami City Commission to the U.S. Senate, announcing Thursday he’ll run for U.S. Senate in Republican Sen. Marco Rubio‘s seat in 2022.

Russell will compete for the Democratic nomination to take on Rubio, in a field that’s expected to include U.S. Rep. Val Demings.

Russell’s announcement, first reported by the Miami Herald, brings another established elected official to the field, which so far mostly contains smaller names. Still, going from the City Commission to the Senate would represent a big promotion for Russell. But in a launch video released Thursday morning, he implied there may be parallels between his 2015 win in the Miami Commission race to his newly announced Senate run.

“With encouragement from my neighbors I decided to run for local office without any big money, name recognition or insider endorsements,” Russell said. “The pundits never thought I had a chance. But in the end, we won.”

Russell followed up that 2015 win with another victory in 2019. Facing term limits in 2023, Russell is now setting his sights on Washington.

Demings, however, has a significant national profile thanks to her time in the U.S. House. She hasn’t formally entered the Senate race but is already pulling in endorsements and is likely to be the Democratic Party’s preferred choice in the contest. The Democratic Primary field also contains lesser-known candidates Edward Abud, Allen Ellison, Josue Larose, Allek Pastrana and Joshua Weil.

Russell launched a water sports company before joining the Miami City Commission. Though he has served nearly two terms on that body, he’s leaning into his outsider status in his launch video released Thursday.

“The career politicians have it all backwards,” Russell said.

“Too many of those we hoped would lead, they just talk,” he added, as footage of Rubio rolls.

Russell’s video even contained a few tongue-in-cheek references to some well-known Rubio moments.

“When I think about our Senator in Washington, Marco Rubio, I shake my head. I like to work with my hands, not worry about how big they are. I’m more worried about Florida’s water equality — and how it affects our economy — than I am about my own bottle of water.”

Russell also said he would support reforming the filibuster, which has so far earned resistance from Democratic Sens. Joe Manchin of West Virginia and Kyrsten Sinema of Arizona.

Russell doesn’t explicitly say he would abolish the filibuster. But if Democrats were to do so, it would allow bills to pass with 50 votes rather than 60, allowing Democrats to push more of their policy proposals through. The Senate currently sits at a 50-50 tie, with Democratic Vice President Kamala Harris holding the tie-breaking vote.

The 2022 U.S. Senate contest will be one of Florida’s largest, alongside the gubernatorial contest.