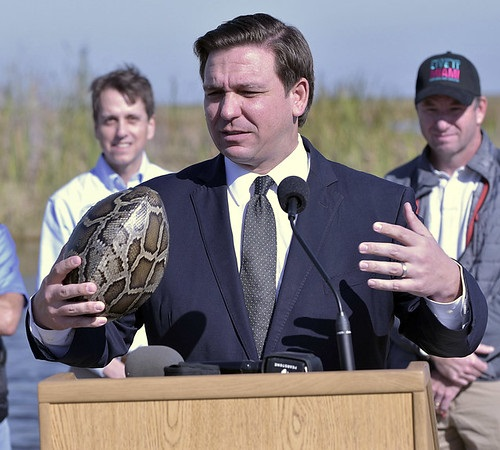 At an unflashy news conference Thursday in the Everglades west of Miami, Gov. Ron DeSantis kicked off the 10-day Python Challenge.

The now-annual challenge — the event previously took place every three years — invites python hunters from across the world to come to the Sunshine State to ferret out invasive Burmese pythons.

Burmese pythons can grow up to 20 feet in length and reach 200 pounds. The nonnative species is taking over parts of the Florida ecosystem and wreaking havoc on the food chain.

“We love the python challenge,” DeSantis declared while wearing jeans and standing under a tent to avoid oncoming rain.

Handlers whipped out a captured python for a photo op with the Governor.

“I mean, these things will eat everything,” DeSantis said. “They’re just running roughshod over all the other species. That’s not what we want.”

Pythons compete with native wildlife for food. Several mammal declines in Everglades National Park have been linked to Burmese pythons, according to the U.S. Geological Survey. The remote southernmost regions of Everglades National Park, where pythons have been established the longest, have seen the most severe declines in native species. In a 2012 study, populations of raccoons and opossums had dropped 99%, and bobcats 87% since 1997. Marsh rabbits, cottontail rabbits, and foxes effectively disappeared from that area.

DeSantis also said the invasive species, if left unchecked, could get in the way of other Everglades restoration efforts, a stated priority for the Governor.

Removal efforts have ranged from a python detector dog program to a Python Action team, made up of people paid to remove and turn in pythons to FWC.

Though python hunting is legal at any time of the year in Florida, the Python Challenge is unique because it invites hunters from anywhere to come to Florida to compete for prizes.

“There’s people from all over the world that want to come do the python challenge,” DeSantis said.

This year, prizes for the challenge could run as high as $2,500.

Year after year, more pythons are being removed from Florida’s swamplands. FWC had a record year of python removal in 2020, rooting out 35% more pythons than the previous year.

He said the state worked with the U.S. Department of the Interior to access federal lands for python removal. South Florida Water Management District board member Ronald “Alligator Ron” Bergeron, speaking at Thursday’s news conference, said he thinks that has helped efforts to reestablish native wildlife in the Everglades.

“I think what we did, under the Governor’s leadership is working to develop a plan with our federal partners to get more access into remote areas, to work in the Big Cypress, to open up secondary trails in order for python hunters to get into somewhere around 100,000 acres for the Python,” Bergeron said.

previousIronic? Ron DeSantis slams Anthony Fauci for too many interviews during pandemic