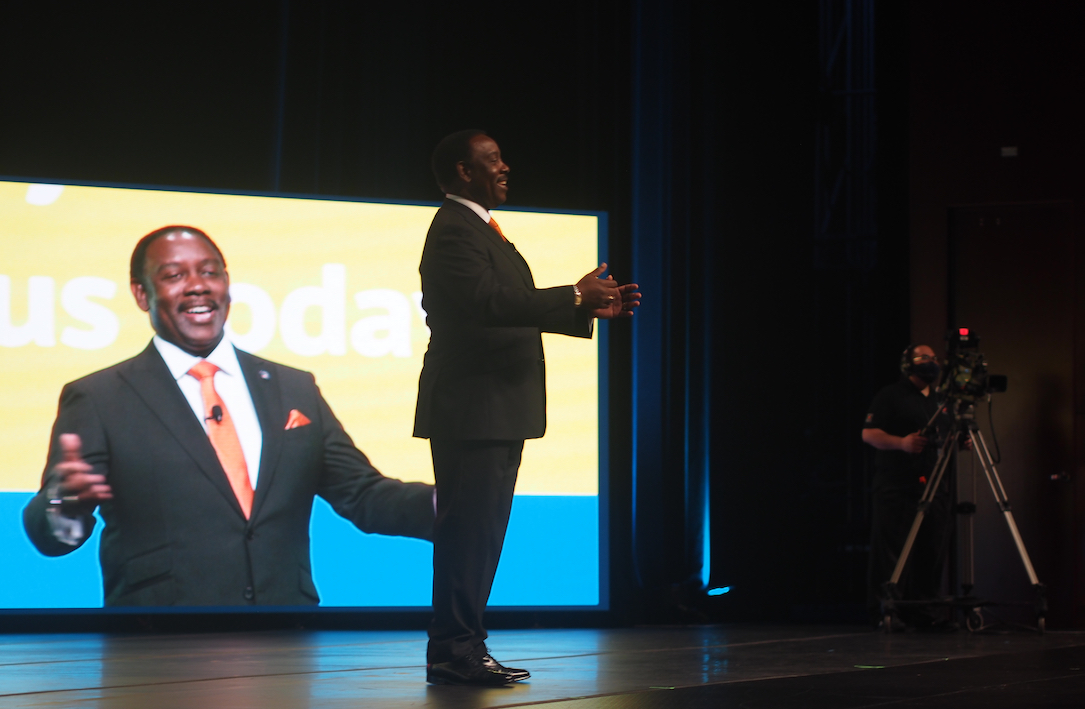 Demings made the announcement as the highlight of his annual State of Orange County Address, which otherwise focused largely on the county’s response to the pandemic that at one time smashed the economy, caused the unemployment rate to soar to more than 22%, sickened more than 130,000, and caused more than 1,300 deaths in the county over the past 15 months.

In Friday’s address, Demings expressed sadness for what had occurred, yet also delight in the current recovery, and optimism for the future.

“This past year has been difficult for all of us,” Demings said. “Due to a once in a century pandemic, we have experienced loss, we have faced unforeseen challenges, and we have tested the limits of our frontline healthcare workers, emergency first responders, and essential workers.

“But the story does not end there. This narrative will be about triumph over defeat.” Demings continued.

Lifting Demings’ executive orders requiring indoor mask usage and other social distancing measures effectively frees up the county from any disputed requirements. Gov. Ron DeSantis already has lifted such orders statewide. But some Democratic county leaders such as Demings had ignored the Governor’s order and pressed forward with their own, locally.

There remain federal guidelines from the Centers for Disease Control and Prevention, which Demings urged people to follow. He cautioned the county continues to attract millions of people from around the world, who may be bringing in virus variants.

Specifically, the county’s rolling 14-day COVID-19 test positive results rate fell below 5%, the final threshold he set for lifting the state of emergency.

“We are back. We are back on course for destination greatness.” Demings declared.

Afterwards, talking with journalists, Demings wished there had been more coordination between the various levels of government — federal, state, and local — but he said he did not think that changed the timing of the county’s recovery.

“The ideal is there should be good collaboration across all levels of government,” Demings said. “Has it slowed us down? No. We wrestle with these issues every day.”

The State of Orange County Address, his third, was short on new initiatives, as Demings and the county government have been focused on recovery for more than a year. He touted his Vision 2050 planning, which began late last year to devise a new growth map for the next 30 years, He also said the county would be studying residents’ “digital divide” and would begin planning programs to close it, making sure more of the county has access to broadband internet.

He also pledged to restart his campaign for a sales tax increase, possibly for the 2024 ballot. He said that will be contingent on when the county’s economy is fully recovered.

“I don’t have a crystal ball, so I can’t say precisely when our economy will fully recovery. But where we are now is a great indication that it won’t be long now,” Demings said. “It’s not going to be two years or three years or five years. I believe it’s going to be a matter of months before our local economy is firing on all cylinders.”

Demings said Orange County has continued to grow through the pandemic, seeing about 1,000 new residents a week move into the county.

“It didn’t slow down during the pandemic,” he said.