Some Floridians eat bay scallops while others round them up and babysit them.

State biologists have worked to bring back bay scallop populations by doing everything from population monitoring to a Scallop Sitter program, even hosting a Scallop Rodeo to collect and preserve the mollusks. The efforts worked well enough to allow selective recreational scalloping in some parts of the state.

Declining bay scallop populations in recent decades mean the activity is closely monitored by the Florida Fish and Wildlife Conservation Commission (FWC). Recreational bay scalloping is only allowed from the Hernando-Pasco County line north to Mexico Beach. Each region has its own dates. Steinhatchee has some of the state’s prime scalloping grounds. The coastal area has rivers flowing into the Gulf stirring up the right mix of fresh and salt water to keep the scallops happy.

Bay scallops live in beds of sea grass and can have colorful shells, according to Jennifer Granneman, associate research scientist at the Florida Fish and Wildlife Research Institute (FWRI). Granneman is in charge of the bay scallop restoration effort FWRI is conducting.

“They actually can be quite colorful. You’ll see orange and yellow color morphs. Typically, you’ll see that they have this grayish brown muddled shell color, but they do come in other fun color varieties,” Granneman said.

Scallops are known for mesmerizing divers with a row of blue eyes that peep out from their shell. The eyes alert the scallop to changes in light, but are also a dead giveaway to scallop hunters because the glowing blue color quickly calls attention to a scallop’s location in the sea grass. It’s why scallop hunting is often referred to as an underwater Easter egg hunt.

Scallopers have to be quick because, according to Granneman, scallops are “somewhat shy” and will avoid humans.

“It’s a whole lot of fun to be underwater, and to see one of those scallops and see it trying to swim away from you and catch it,” Granneman said.

Danger could come in the form of a pinched finger if the scallop snaps its two shells closed. Sometimes scallopers use dip nets to catch the invertebrates.

“It’s pretty exciting, and you can see a lot of other neat wildlife while you’re in the water scalloping. Often you’ll see seahorses and fish and lots of other invertebrates,” Granneman said.

But hunting isn’t the only way to engage with Florida’s bay scallops. FWRI scientists like Granneman work with the public to closely monitor and restore scallop populations.

Diminished water quality among other environmental factors caused a decline in Florida’s bay scallop populations, which were once plentiful from West Palm Beach on the Atlantic coast around to Pensacola in the Panhandle. Florida’s bay scallops, in recent years, occur in isolated populations scattered along the west coast. The majority are found in nearshore seagrass beds from Tarpon Springs in Pinellas County to Port St. Joe in Gulf County, according to FWC.

Scallops are sensitive to changing environmental conditions, such as sea grass loss, increases in fresh water and loosening sediment. Because Florida bay scallops typically only live one year, local populations are more susceptible to periodic collapse.

“We expect to see fluctuations in the population, but overall since we’ve started our restoration efforts we have seen an increase in scallop populations in the areas we’re working in,” Granneman said.

FWRI has used a Scallop Sitter program to offset population losses in certain areas. The program, funded by restoration money set aside after the Deepwater Horizon oil spill, involves collecting juvenile scallops and placing the scallops in cages of 50 in certain underpopulated areas. FWRI asks certain qualifying community members to monitor the teenaged scallops. By placing the scallops in cages, they are protected from predators and scalloping humans.

To collect the juvenile scallops for the Scallop Sitter program and other restoration efforts, FWRI hosts a Scallop Rodeo. People in certain areas are asked to collect buckets of 200 live scallops and turn them into biologists to be redistributed in cages.

“We’re just rounding up the scallops,” Granneman quipped. “People get really into it.”

Granneman said the Scallop Rodeo is a family friendly activity.

“It’s kind of neat because in St. Andrew Bay, for instance, there hasn’t been a recreational scallop harvest season for quite some time, but this gives the people the opportunity to go out and actually collect scallops, which is fun, and then bring them back to use for our restoration purposes,” Granneman explained.

Bay scalloping in the Fenholloway River through the Suwannee River opened June 15 and will remain open through Labor Day. That includes state waters in Dixie County, parts of Taylor County and the towns of Keaton Beach and Steinhatchee. 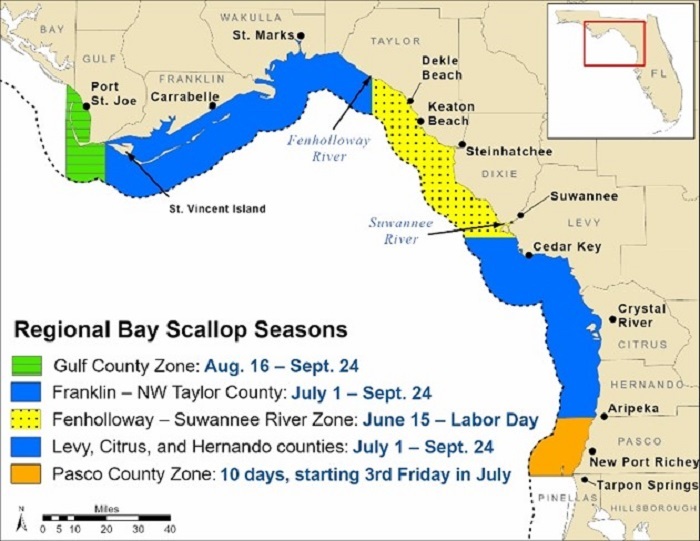 St. Joseph Bay/Gulf County: Aug. 16 through Sept. 24. The region includes all state waters from the Mexico Beach Canal in Bay County to the westernmost point of St. Vincent Island in Franklin County.

Levy, Citrus and Hernando counties (including Cedar Key, Crystal River and Homosassa): July 1 through Sept. 24. The region includes all state waters from the mouth of the Suwannee River in Levy County to the Hernando – Pasco county line.

Pasco County: Open for 10 days starting the third Friday in July (July 16-25, 2021). The region includes all state waters south of the Hernando – Pasco county line and north of the Anclote Key Lighthouse, including all waters of the Anclote River.