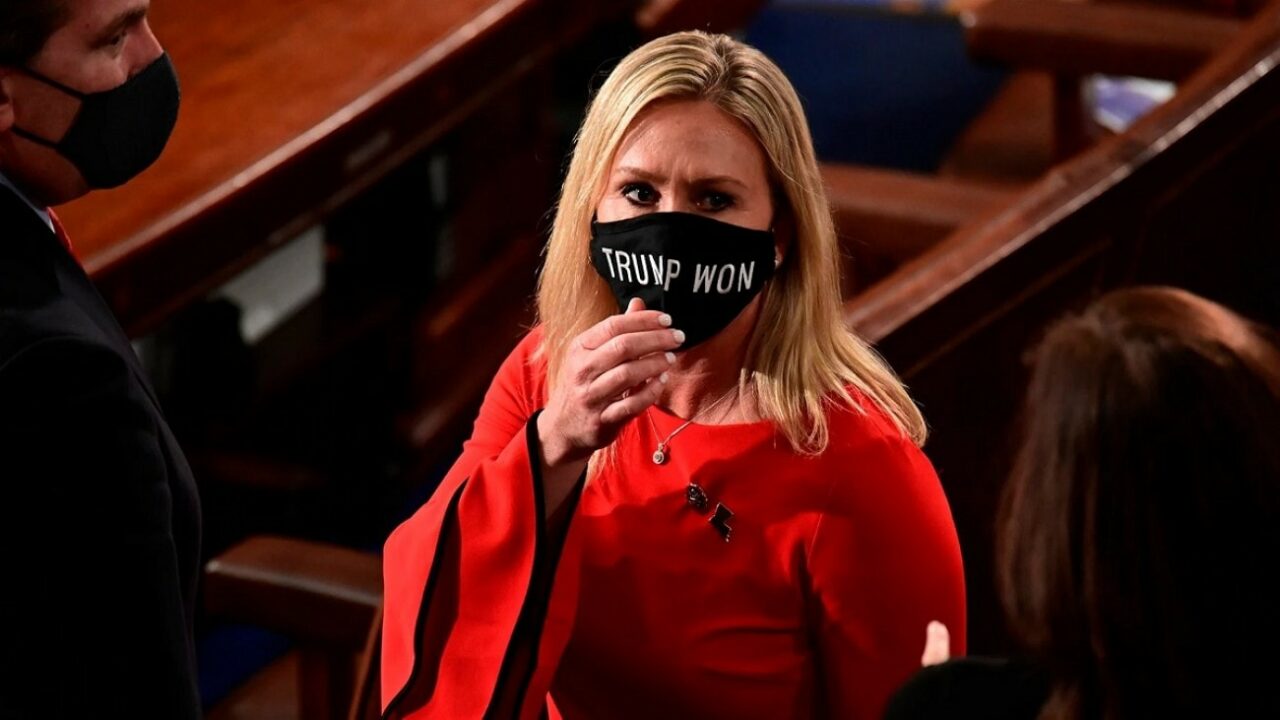 Abraham Lincoln would have two words to say about this: "For shame."

This is not a joke, although I wish it was. She will really speak at a dinner that honors the man who freed the slaves. Try not to throw up in your mouth.

Yes, the Queen of Quackery’s Gullible’s Travel Tour is on her way.

Please allow me to suggest a few menu items.

Entrée: A choice between Crackpot Chicken or Prime Fib.

And of course, an unlimited supply of White whine.

Greene turned the Big Lie into a career path, stoking the stupidity of the Q-crowd in the name of Freedumb and ‘Merica.

And now it’s coming to a banquet room near you.

“Congresswoman Marjorie Taylor Greene is making waves in Washington, D.C., and around the country, doing exactly what she said she would do on the campaign trail: fighting to Save America and Stop Socialism,” a post from the Hillsborough GOP announcing the event reads.

From what? I’d recite some actual facts, but those are merely a nuisance to the narrative MTG loves to serve to her reality-challenged flock.

No, the election wasn’t stolen. Joe Biden got more votes than what’s-his-name in Mar-a-Lago — a lot more votes.

Remember her tweet comparing vaccination proof to the Holocaust?

In case you forgot, here it is: “Vaccinated employees get a vaccination logo just like the Nazis forced Jewish people to wear a gold star. Vaccine passports & mask mandates create discrimination against unvaxxed people who trust their immune systems to a virus that is 99% survivable.”

Words like “disgusting” and “moronic” come to mind when reading that tweet. Then again, that’s her game.

She’s a cynic who preys on the vulnerability of the tinfoil hat crowd.

It’s either that, or she’s just a bozo, but who says she can’t be both?

Like her buddy Matt Gaetz, Greene is a lie-spewing narcissist, but there’s gold in those fibs. She raised an eyebrow-raising $3.2 million in the first quarter of 2021.

To be fair, it’s not like she has to do any lawmaking, and for that we are grateful. She has a lot of spare time after the U.S. House voted 230-199, including 11 Republicans, to remove her from all committee assignments. Why?

Could it have been, as NPR reported, her history of trafficking in racism? Maybe it was her whacked-out conspiracy theories and support for online comments encouraging violence against Democratic officials before taking office.

She once referred to “the so-called plane that crashed into the Pentagon.” She noted, it’s odd there’s never any evidence shown for a plane in the Pentagon.”

Uh, here is actual footage of that attack that killed 125 people at the Pentagon and 64 on American Airlines flight 77.

The Parkland massacre? After some loon posted on Facebook that it was staged, Greene replied, “Exactly!”

But she grabs a microphone, mugs for the camera, spews a bunch of garbage, and people steeped in delusion lap it up. They believe she is on a crusade to drain the swamp, but she is the swamp.

She’s a creature of crazies, and Hillsborough Republicans can’t wait to cheer her.

Abraham Lincoln would have two words to say about this.