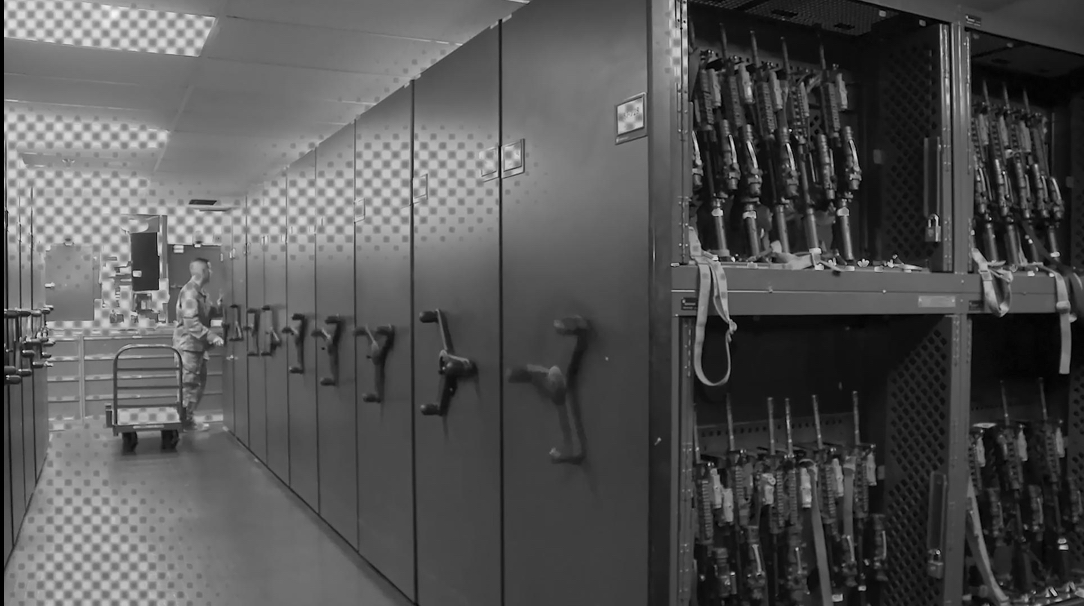 At least 1,900 U.S. military firearms were lost or stolen during the 2010s, with some resurfacing in violent crimes, an Associated Press investigation has found.

Because some armed services have suppressed the release of basic information, AP’s total is a certain undercount.

Government records covering the Army, Marine Corps, Navy and Air Force show pistols, machine guns, shotguns and automatic assault rifles have vanished from armories, supply warehouses, Navy warships, firing ranges and other places where they were used, stored or transported. These weapons of war disappeared because of unlocked doors, sleeping troops, a surveillance system that didn’t record, break-ins and other security lapses that, until now, have not been publicly reported.

While AP’s focus was firearms, military explosives also were lost or stolen, including armor-piercing grenades that went missing while being transported from Blount Island, the U.S. Marine Corps depot in Jacksonville, to Letterkenny Army Depot in Pennsylvania. They were found in an Atlanta backyard eight months later.

Weapon theft or loss spanned the military’s global footprint, touching installations from coast to coast, as well as overseas. In Afghanistan, someone cut the padlock on an Army container and stole 65 Beretta M9s. The theft went undetected for at least two weeks, when empty pistol boxes were discovered in the compound. The weapons were not recovered.

Even elite units are not immune. A former member of a Marines special operations unit was busted with two stolen guns. A Navy SEAL lost his pistol during a fight in a restaurant in Lebanon.

The Pentagon used to share annual updates about stolen weapons with Congress, but the requirement to do so ended years ago and public accountability has slipped. The Army and Air Force, for example, couldn’t readily tell AP how many weapons were lost or stolen from 2010 through 2019. So the AP built its own database, using extensive federal Freedom of Information Act requests to review hundreds of military criminal case files or property loss reports, as well as internal military analysis and data from registries of small arms.

The military’s weapons are especially vulnerable to corrupt insiders responsible for securing them. They know how to exploit weak points within armories or the military’s enormous supply chains. Often from lower ranks, they may see a chance to make a buck from a military that can afford it.

“It’s about the money, right?” said Brig. Gen. Duane Miller, who as deputy provost marshal general is the Army’s No. 2 law enforcement official.

Theft or loss happens more than the Army has publicly acknowledged. During an initial interview, Miller significantly understated the extent to which weapons disappear, citing records that report only a few hundred missing rifles and handguns. But an internal analysis AP obtained, done by the Army’s Office of the Provost Marshal General, tallied 1,303 firearms.

In a second interview, Miller said he wasn’t aware of the memos, which had been distributed throughout the Army, until AP pointed them out following the first interview. “If I had the information in front of me,” Miller said, “I would share it with you.” Other Army officials said the internal analysis might overstate some losses.

The AP’s investigation began a decade ago. From the start, the Army has given conflicting information on a subject with the potential to embarrass — and that’s when it has provided information at all. A former insider described how Army officials resisted releasing details of missing guns when AP first inquired, and indeed that information was never provided.

Top officials within the Army, Marines and Secretary of Defense’s office said that weapon accountability is a high priority, and when the military knows a weapon is missing it does trigger a concerted response to recover it. The officials also said missing weapons are not a widespread problem and noted that the number is a tiny fraction of the military’s stockpile.

In May, an Army trainee who fled Fort Jackson in South Carolina with an M4 rifle hijacked a school bus full of children, pointing his unloaded assault weapon at the driver before eventually letting everyone go.

Last October, police in San Diego were startled to find a military grenade launcher on the front seat of a car they pulled over for expired license plates. The driver and his passenger were middle-aged men with criminal records.

Stolen military guns have been sold to street gang members, recovered on felons and used in violent crimes.

The AP identified eight instances in which five different stolen military firearms were used in a civilian shooting or other violent crime, and others in which felons were caught possessing weapons. To find these cases, AP combed investigative and court records, as well as published reports. Federal restrictions on sharing firearms information publicly mean the case total is certainly an undercount.

The military requires itself to inform civilian law enforcement when a gun is lost or stolen, and the services help in subsequent investigations. The Pentagon does not track crime guns, and spokesman Kirby said his office was unaware of any stolen firearms used in civilian crimes.

The closest AP could find to an independent tally was done by the FBI’s Criminal Justice Information Services. It said 22 guns issued by the U.S. military were used in a felony during the 2010s. That total could include surplus weapons the military sells to the public or loans to civilian law enforcement.

Those FBI records also appear to be undercount. They say that no military-issue gun was used in a felony in 2018, but at least one was.

Meanwhile, authorities in central California are still finding AK-74 assault rifles that were among 26 stolen from Fort Irwin a decade ago. Military police officers stole the guns from the Army base, selling some to the Fresno Bulldogs street gang.

At least nine of the AKs have not been recovered.

The people with easiest access to military firearms are those who handle and secure them.

In the Army, they are often junior soldiers assigned to armories or arms rooms, according to Col. Kenneth Williams, director of supply under the Army’s G-4 Logistics branch.

“This is a young guy or gal,” Williams said. “This is a person normally on their first tour of duty. So you can see that we put great responsibility on our soldiers immediately when they come in.”

Armorers have access both to firearms and the spare parts kept for repairs. These upper receivers, lower receivers and trigger assemblies can be used to make new guns or enhance existing ones.

“We’ve seen issues like that in the past where an armorer might build an M16” automatic assault rifle from military parts, said Mark Ridley, a former deputy director of the Naval Criminal Investigative Service. “You have to be really concerned with certain armorers and how they build small arms and small weapons.”

In 2014, NCIS began investigating the theft of weapons parts from Special Boat Team Twelve, a Navy unit based in Coronado, California. Four M4 trigger assemblies that could make a civilian AR-15 fully automatic were missing. Investigators found an armory inventory manager was manipulating electronic records by moving items or claiming they had been transferred. The parts were never recovered and the case was closed after federal prosecutors declined to file charges.

Investigators have found sensitive and restricted parts for military weapons on sites including eBay, which said in a statement it has “zero tolerance” for stolen military gear on its site.

At Fort Campbell, Kentucky, soldiers stole machine gun parts and other items that ended up with online buyers in Russia, China, Mexico and elsewhere. The civilian ringleader, who was found with a warehouse of items, was convicted. Authorities said he made hundreds of thousands of dollars.

Often though, recovering a weapon can prove hard.

When an M203 grenade launcher couldn’t be found during a 2019 inventory at a Marine Corps supply base in Albany, Georgia, investigators sought surveillance camera footage. It didn’t exist. The warehouse manager said the system couldn’t be played back at the time.

An analysis of 45 firearms-only investigations in the Navy and Marines found that in 55% of cases, no suspect could be found and weapons remained missing. In those unresolved cases, investigators found records were destroyed or falsified, armories lacked basic security and inventories weren’t completed for weeks or months.

“Gun-decking” is Navy slang for faking work. In the case of the USS Comstock, gun-decking led to the disappearance of three pistols.

AP learned that the Army, the largest of the armed services, is responsible for about 3.1 million small arms. Across all four branches, the U.S. military has an estimated 4.5 million firearms, according to the nonprofit organization Small Arms Survey.

In its accounting, whenever possible AP eliminated cases in which firearms were lost in combat, during accidents such as aircraft crashes and similar incidents where a weapon’s fate was known.

Unlike the Army and Air Force, which could not answer basic questions about missing weapons, the Marines and Navy were able to produce data covering the 2010s.

The Navy data showed that 211 firearms were reported lost or stolen. In addition, 63 firearms previously considered missing were recovered.

According to AP’s analysis of data from the Marines, 204 firearms were lost or stolen, with 14 later recovered.

To account for missing weapons, the Pentagon relies on incident reports from the services, which it keeps for only three years.

Pentagon officials said that approximately 100 firearms were unaccounted for in both 2019 and 2018. A majority of those were attributable to accidents or combat losses, they said. Even though AP’s total excluded accidents and combat losses whenever known, it was higher than what the services reported to the Pentagon.

The officials said they could only discuss how many weapons were missing dating to 2018. The reason: They aren’t required to keep earlier records.

The Air Force was the only service branch not to release data. It first responded to several Freedom of Information Act requests by saying no records existed. Air Force representatives then said they would not provide details until yet another FOIA request, filed 1.5 years ago, was fully processed.

Army spokesman Lt. Col. Brandon Kelley said the service’s property inventory systems don’t readily track how many weapons have been lost or stolen. Army officials said the most accurate count could be found in criminal investigative summaries released under yet another federal records request.

AP’s reading of these investigative records showed 230 lost or stolen rifles or handguns between 2010 and 2019 — a clear undercount. Internal documents show just how much Army officials were downplaying the problem.

The AP obtained two memos covering 2013 through 2019 in which the Army tallied 1,303 stolen or lost rifles and handguns, with theft the primary reason for losses. That number, which Army officials said is imperfect because it includes some combat losses and recoveries, and may include some duplications, was based on criminal investigations and incident reports.

The internal memos are not “an authoritative document,” Kelley said, and were not closely checked with public release in mind. As such, he said, the 1,303 total could be inaccurate.

The investigative records Kelley cited show 62 lost or stolen rifles or handguns from 2013 through 2019. Some of those, like the Beretta M9 used in four shootings in Albany, New York, were recovered.

previousSunburn — The morning read of what’s hot in Florida politics — 6.15.21