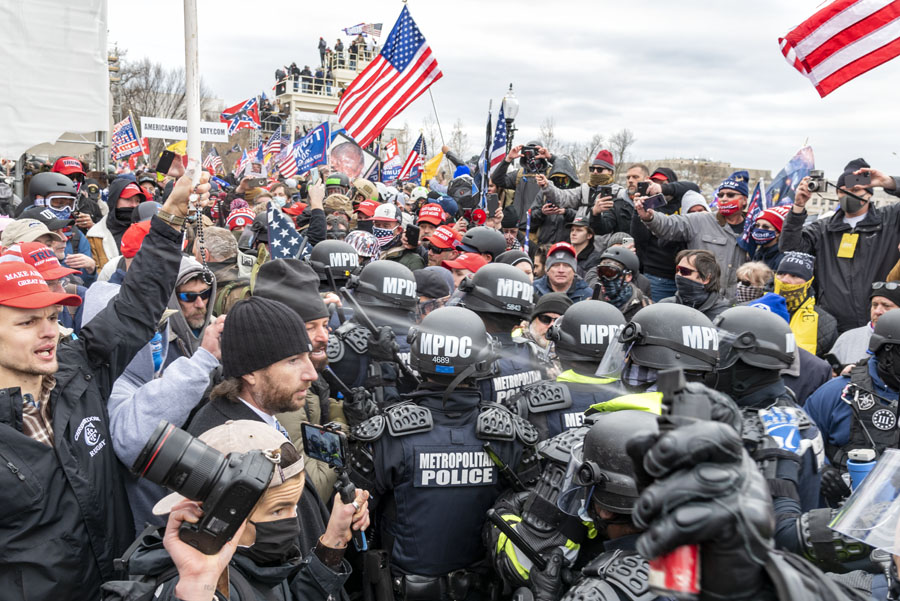 The Sunshine State now has more individuals charged in connection with the attack than anywhere else in the nation.

Arguably, the state of Florida led the Jan. 6 insurrection at the U.S. Capitol.

The Sunshine State now has more individuals charged in connection with the attack than anywhere else in the nation. Florida also has the most charges connected to far-right extremist groups, like the Oath Keepers and the Proud Boys.

But this weekend, a handful of Florida Republican candidates will host a rally in Tallahassee calling for Gov. Ron DeSantis and others to put pressure on authorities to free the “political prisoners” of Jan. 6.

The “Free Our Patriots Rally in Tally” will be Saturday and is hosted by Luis Miguel, a far-right Republican candidate looking to primary Sen. Marco Rubio. “Folks, The patriots who have been hunted down by the corrupt, communist FBI are suffering. Many of them are veterans who fought for this nation,” tweeted Miguel. “Let’s do our part to ensure they’re liberated. We can’t allow this in America. Be there at the Florida Capitol on July 10.

Folks, The patriots who have been hunted down by the corrupt, communist FBI are suffering. Many of them are veterans who fought for this nation. Let's do our part to ensure they're liberated. We can't allow this in America. Be there at the Florida Capitol July 10. pic.twitter.com/nkX1jrZEAQ

Miguel, who posts a near nonstop stream of conspiracy theories from his Twitter account, has criticized Rubio for things like getting a vaccine and voting to certify the 2020 election results. Miguel also claims that the deadly Jan. 6 insurrection that resulted in five deaths (including a police officer) was in fact a “False Flag carried out by a corrupt FBI to distract from the Election Theft and target conservatives.”

Tampa Bay Republican and two-time congressional failure Christine Quinn has also publicly stated that she will attend the event.

“Join me to support our Patriots that have been unlawfully arrested and detained without due cause,” posted Quinn to her Instagram account. Like Miguel, Quinn has consistently denied that Joe Biden won the 2020 election, and she also continues to deny that she lost her own election to District 14 Congresswoman Kathy Castor who won more than 60% of the votes.

After providing zero evidence, Quinn has since dropped a lawsuit contesting her election results and says she will run a third time in 2024. Coincidentally, she’s still suing local Trump supporters for stiffing her with all the travel expenses to the U.S. Capitol on Jan. 6

As of now, charges against Florida rioters related to Jan. 6 range from conspiracy; assault, including on a federal officer; civil disorder; violent entry; obstruction of an official proceeding; and entering and remaining in a restricted building.

Federal authorities have already arrested over 500 people suspected of involvement with the Capitol riot, and 60 of those are from Florida.

Meanwhile, 2022 Democratic gubernatorial candidate Charlie Crist has called on DeSantis to publicly reject the conspiracy theory that Trump actually won the election, and to investigate Florida’s connection to the hate groups involved with Jan. 6.

“If Gov. DeSantis can’t admit the truth about something as simple as who the duly elected President is, is there anything he won’t mislead the public about?” said Crist. “Just as troublingly, his silence is empowering the hate groups that fueled the insurrection of January 6th. Floridians deserve better.”

So far, DeSantis has done neither.

Support local journalism in these crazy days. Please consider making a one-time or monthly donation to help support our staff.

previousHaiti official: First Lady to be treated in Miami