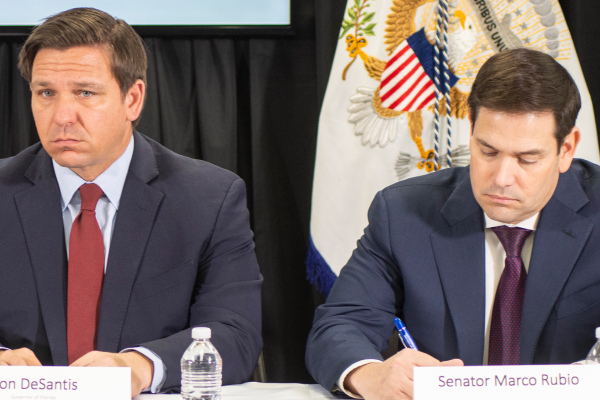 Will Biden go along with DeSantis' ask?

Protests against the communist regime in Cuba continue, but the world is cut off from knowing what is being done to protesters, journalists and citizens.

Florida’s Governor and Senior Senator each implored the President to do something about it Wednesday.

Gov. Ron DeSantis wants President Joe Biden to help him do something about that and asked for that assistance in a polemic-free letter to the White House.

“Steps must be taken immediately,” the Governor urged.

DeSantis wrote Biden Wednesday asking him to “assist in providing internet access to the people of Cuba standing up against communist oppression and demanding a voice after decades of suffering under a cruel dictatorship.”

“At first, the world could see the images and videos of this mass movement, but now the tyrannical regime of President Miguel Díaz-Canel has shut off access to the Internet. The Cuban people have lost their ability to communicate with one another, and many Floridians born in Cuba have no information on the safety of their loved ones. Equally as important, the world has also lost the ability to see what is happening on the ground as the Cuban people rise in support of freedom,” DeSantis wrote, striking Reagan-era polemical tones.

“Technology exists to provide Internet access into Cuba remotely, using the innovation of American enterprise and the diverse industries here. Similar to the American efforts to broadcast radio into the Soviet Union during the Cold War in Europe, the federal government has a history of supporting the dissemination of information into Cuba for the Cuban people through Radio & Televisión Martí, located in Miami. In addition to sending information, however, our efforts must include creating a means for the Cuban people to speak to the world,” DeSantis added.

“I urge you to act immediately to provide all necessary authorizations, indemnifications, and funding to American businesses with the capability to provide Internet access for the people of Cuba. Steps must be taken immediately,” DeSantis added. “Internet access for the Cuban people is of critical importance as they stand up against the repressive Communist government. In the hands of these brave individuals, such access may be the key to finally bringing democracy to the island.”

DeSantis, like many Florida leaders, has been directly engaging with the Cuban American community as they yearn for freedom for the island. And he broached the subject there.

“One of the things I think we should be able to do with our private companies or with the United States is to provide some of that internet service via satellite,” DeSantis said at a roundtable Tuesday in Miami.

“In my letter to you on July 12 outlining steps to be taken to support the historic protests, I urged you to facilitate open and free internet for the people of Cuba. Without it, the Cuban people, who yearn for basic political and economic freedoms, can more easily be monitored, suppressed, detained, and brutalized by the regime without accountability. Bringing free and open internet will help the Cuban people communicate with one another without censorship and repression and show them that the world stands beside them in their quest for liberty,” Rubio wrote.

“In recent years, American firms have made significant strides in telecommunications technologies, including fiber-less solutions that can be deployed to remote regions at relatively short notice. For example, in 2017, during the aftermath of Hurricane Maria, the island of Puerto Rico received emergency connectivity through balloon-supplied internet. American technical capacity, coupled with the physical proximity of Cuba to the United States and its interests, make providing unrestricted access to the island an attainable and morally imperative goal. Today, U.S. companies stand ready and willing to support this effort with the support of the federal government,” the Senator added.

nextSunburn — The morning read of what’s hot in Florida politics — 7.15.21