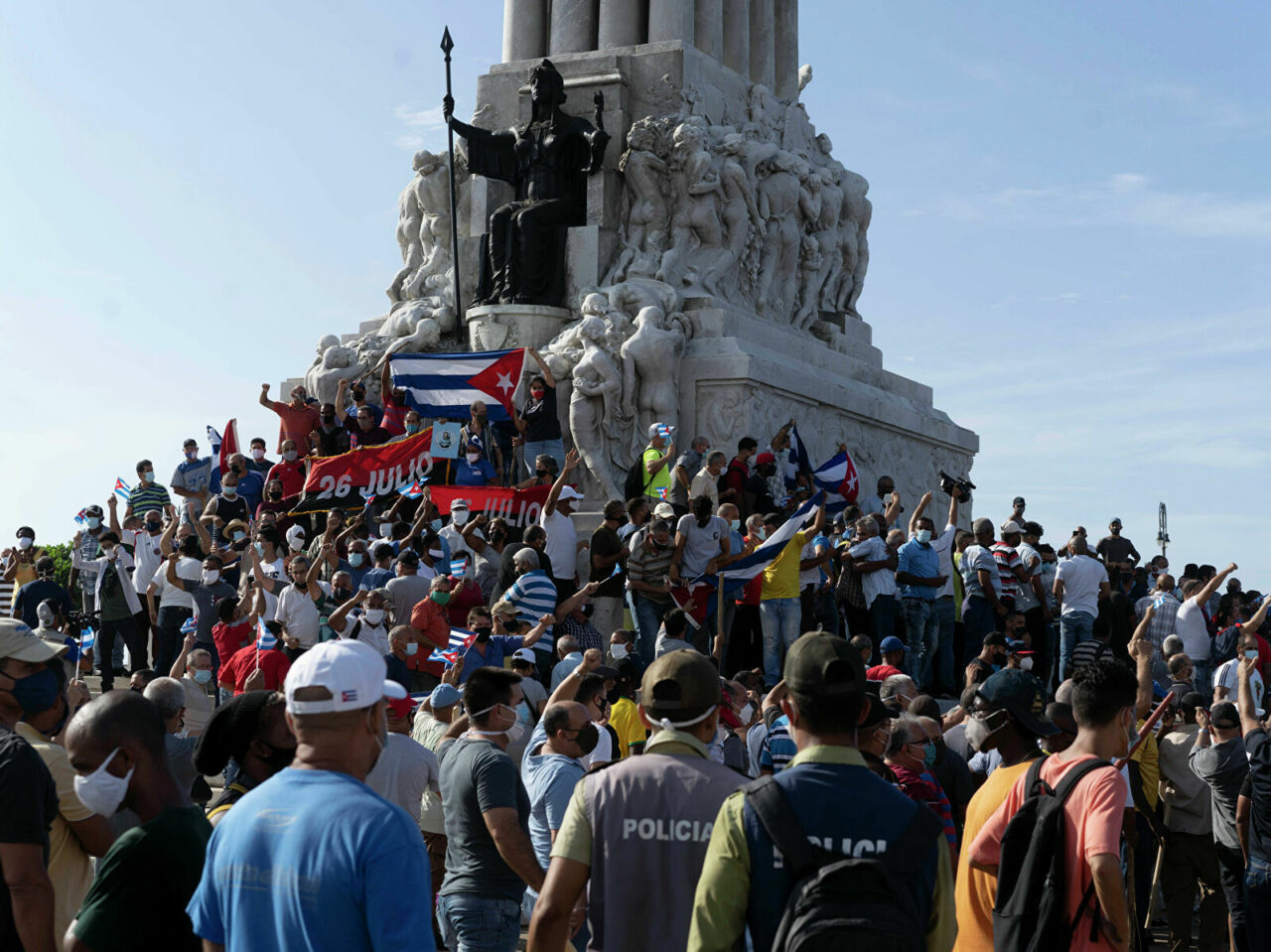 DeSantis said American protests are far different than those in Cuba.

Gov. Ron DeSantis inserted himself into the geopolitical forces currently swirling after rare protests in Cuba this past weekend.

South Florida has the country’s largest population of Cuban Americans.

Speaking Tuesday in Miami at the American Museum of the Cuban Diaspora after a roundtable discussion with members of the Cuban community, DeSantis said his office is “siding with the Cuban people.”

DeSantis, who is rumored to be eying a 2024 presidential run, said the Cuban regime is the “centerpiece of any malign actor that wants to be involved in the Western Hemisphere against American interest.”

“When you see some of these other Marxist regimes that has the Cuban dictatorship’s fingerprints on it every single time, it’s been very hostile to American interest consistently for over 60 years every step of the way,” DeSantis said, pointing to the warm relationship between Venezuela and Cuba that started in 1999.

DeSantis said the historical protests in Cuba this past weekend are not the result of COVID-19 issues, but are the result of unrest bubbling in the oppressed Caribbean island for decades.

“If you go into it thinking that they’re upset about a vaccine shortage, or they’re upset that there’s not enough groceries in the store, but they just want the regime to change a few things around and rearrange the deck chairs on the Titanic, if that’s what you think then you clearly have no hope of getting a favorable outcome here,” DeSantis said.

A man speaking Spanish who said he had fled Cuba just months before interrupted the press conference to back up DeSantis’ assertion.

Lt. Gov. Jeanette Nunez translated for the man saying: “This gentleman said he left five months ago because of political persecution, so we want to thank the Governor. He wants to reiterate, this is not about food. It’s not about vaccines. It’s about people desperate for freedom.”

Some Democratic politicians, including Rep. Anna V. Eskamani, have said DeSantis’ support for the protesters in Cuba is hypocritical because he supported House Bill 1. That law, which DeSantis proposed after protests over the police killing of George Floyd last summer, increases penalties for people who commit crimes while protesting in Florida. When asked about that critique by a reporter, DeSantis said protests in Florida should not be compared to protests in Cuba.

“I think that people understand the difference between going out and peacefully assembling, which is obviously people’s constitutional right, and attacking other people or burning down buildings or dragging people out of a car and doing that. They’re much different situations,” DeSantis said, adding that kind of violence “really wasn’t happening in Florida” last summer.

In a statement Monday, U.S. President Joe Biden signaled support for the Cuban protesters. Biden said the protesters were asserting their basic rights.

“We stand with the Cuban people and their clarion call for freedom and relief from the tragic grip of the pandemic and from the decades of repression and economic suffering to which they have been subjected by Cuba’s authoritarian regime,″ Biden said.

The demonstrations in several Cuban cities and towns were some of the biggest displays of antigovernment sentiment seen in years in tightly controlled Cuba, which is facing a surge of coronavirus cases as it struggles with its worst economic crisis in decades as a consequence of U.S. sanctions reinstated by President Donald Trump’s administration.

Reports from the Associated Press Tuesday said Cuban police were out in force on the country’s streets since the weekend protests, which ended with Cuban authorities detaining more than a dozen protesters.

Internet service has been spotty in Cuba since Sunday, possibly indicating an effort to prevent protesters from communicating with each other.

“We’ve seen how the campaign against Cuba was growing on social media in the past few weeks,″ Díaz-Canel said Monday in a nationally televised appearance in which his entire Cabinet was present. “That’s the way it’s done: Try to create inconformity, dissatisfaction, by manipulating emotions and feelings.”

Reporting from the Associated Press was used in this article.