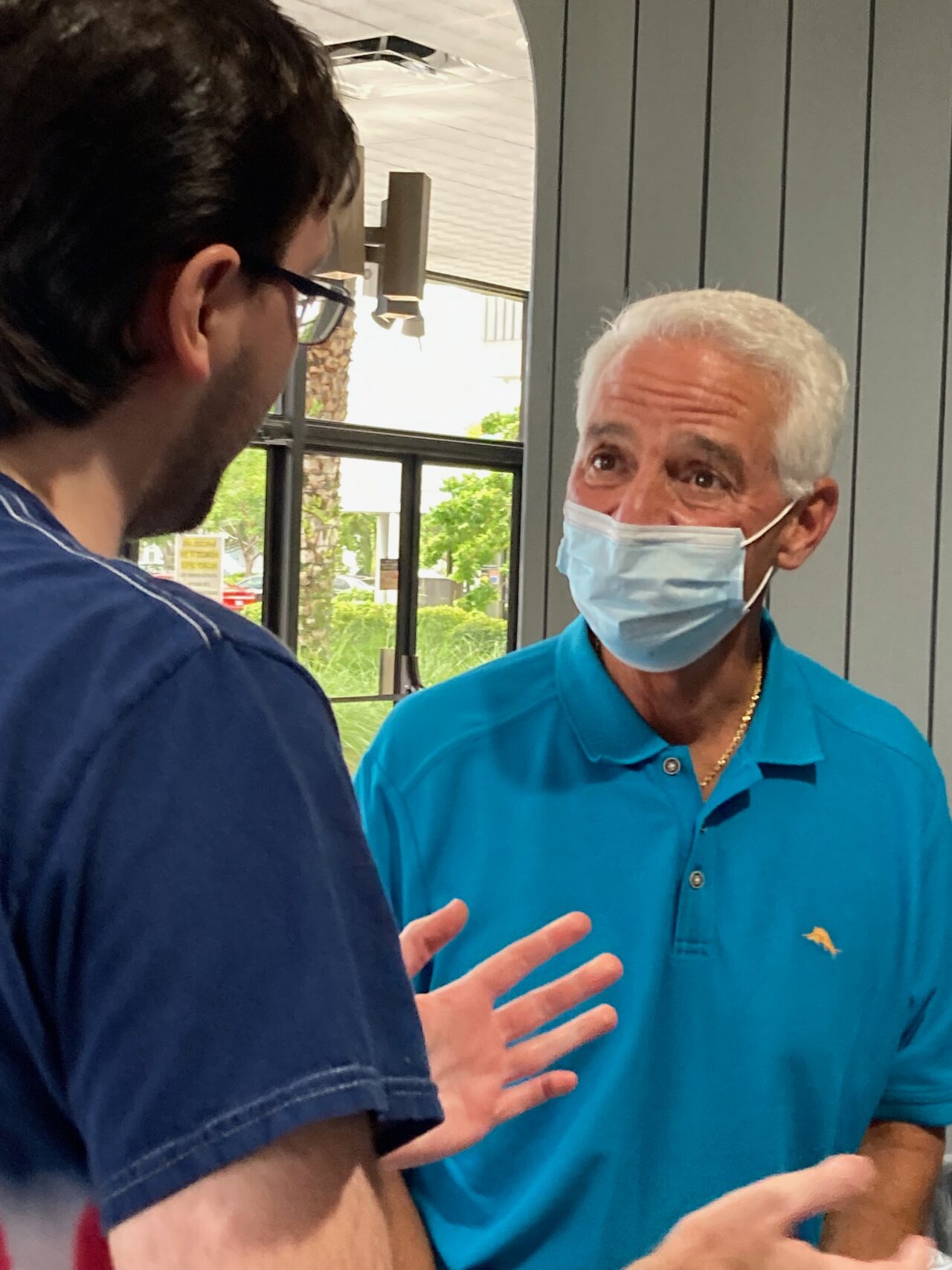 Ex-Governor offers a preview of attack lines against Gov. Ron DeSantis to fire up party faithful

Former Republican Gov. Charlie Crist got a warm welcome from Broward Democrats Sunday — with many on their feet to cheer his bid to become the first Democrat elected Florida Governor in nearly 30 years.

“We’re going to have fun doing this — winning is always fun,” he said to the crowd of about 250, who included both elected Democrats and foot soldiers who work the phone banks. “We’re due. We’re overdue.”

Lawton Chiles was the last Democrat to be Florida Governor, elected in 1994.

Crist served in the No. 1 state government job as a Republican from 2007 to 2011. He said he wants to return to the Governor’s Mansion because Florida deserves a Governor who wakes up in the morning thinking about Florida kids’ test scores and preserving the state’s environment.

Crist has to beat the state Agriculture Commissioner Nikki Fried in the Primary Election next year. Still, Sunday’s 15-minute pep talk for unity offered a preview of his attack lines in the General Election against Republican Gov. Ron DeSantis. He addressed the mostly unmasked crowd at a Century Village clubhouse as they dined on barbecued chicken, ribs, hamburgers and hot dogs.

“I love Florida. I love her with all my heart — she’s special,” Crist said. “This current Governor is running for President. He’s treating Florida like she’s a stepping stone. Florida is special. She is not a stepping stone.”

He noted that as Florida became a COVID-19 hot spot in the last few days, the current Governor has been hard to find.

“You know what’s happening. We have gone to the top. And it is a dubious distinction. And why is that? Because we don’t have leadership,” Crist said.

“Where was he? In Texas,” Crist continued, alluding to DeSantis’ pledge of Florida law enforcement to help control the nation’s southern border, which has come under some criticism.

Emails from the Governor’s Office show no scheduled events Saturday or Sunday.

DeSantis is considered by many to be a likely alternative to run for President should former President Donald Trump not run for the job in 2024. DeSantis has quickly become a national politician with numerous prime-time appearances on cable news.

Crist also hammered DeSantis for how his administration handled the early phase of the vaccine rollout, during which the Governor was accused of favoring donors. DeSantis has fiercely rebutted those claims.

“Is that ethical? Is that fair? Is that Just. It is not. You deserve better,” Crist said.

Crist said the state is ready for a new Governor. And Broward County has more registered Democrats than any other county in the state.

“We’re going to have to have that unified energy to bring this home,” he said.

At what has long been considered a Democratic stronghold, Sunday’s event had candidates for Florida’s 20th Congressional District, such as Broward County Commissioner Barbara Sharief and state Rep. Omari Hardy, a West Palm Beach Democrat, working the crowd. State Reps. Christine Hunschofsky of Parkland, Patricia Williams of Pompano Beach, and Marie Woodson of Hollywood were also there.

Daphne Edwards of Lauderdale Lakes was ready to work the phones for Crist after he spoke.

“He was a damn good Governor even though he was Republican,” she said.

Cory Shearer, a vice-chair of the Broward Democratic Party, said this was the first time the group has met indoors since the COVID-19 outbreak called for masks and social distancing. There was an outdoor event on July Fourth, and the Party has been keeping in touch with online meetings, calls and emails. But that can’t quite match getting together face to face, he said.

“Some of us are Zoomed out,” he said, referring to the online meeting platform that has become popular since the pandemic began.

Bernie Parness, another official with county Democrats, offered a moment of introspection when he asked those in the crowd to consider why Democrats keep losing statewide elections. Too many times, supporters of one candidate fall away after one candidate doesn’t go on to the General Election.

“I want you to make a pledge,” Parness said. “Whoever wins the Primary (Election) has my 150% support.”