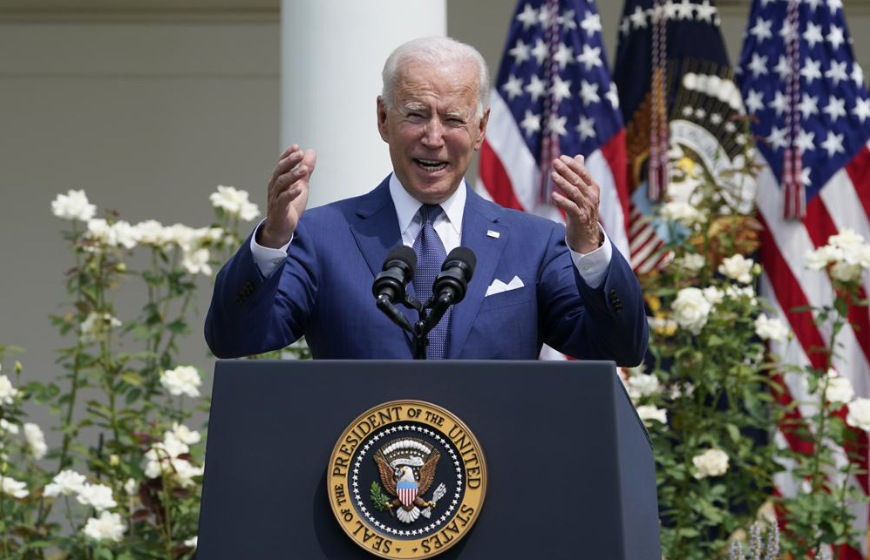 Senators and the White House are locked in intense negotiations to salvage a bipartisan infrastructure deal, with pressure mounting on all sides to wrap up talks and show progress on President Joe Biden’s top priority.

Despite weeks of closed-door discussions, senators from the bipartisan group blew past a Monday deadline set for agreement on the nearly $1 trillion package. Instead they hit serious roadblocks over how much would be spent on public transit and water infrastructure and whether the new spending on roads, bridges, broadband and other projects would be required to meet federal wage requirements for workers. They’re also at odds over drawing on COVID-19 funds to help pay for it.

“This is heading in the right direction,” Portman told reporters at the Capitol. “It’s a big, complicated bill.”

Biden struck a similarly upbeat tone, telling reporters at the White House he remained optimistic about reaching a compromise.

This is a crucial week after more than a monthlong slog of negotiations since Biden and the bipartisan group first celebrated the contours of the nearly $1 trillion bipartisan agreement in June, and senators were warned they could be kept in session this weekend to finish the work.

The White House wants a bipartisan agreement for this first phase, before Democrats go it alone to tackle broader priorities in a bigger $3.5 trillion budget plan that’s on deck. A recent poll from The Associated Press-NORC found 8 in 10 Americans favor some increased infrastructure spending, and the current package could be a political win for all sides as lawmakers try to show voters that Washington can work. Securing the bipartisan bill is also important for some centrist Democrats before engaging in the broader undertaking.

But as talks drag on, anxious Democrats, who have slim control of the House and Senate, face a timeline to act on what would be some of the most substantial legislation in years. Senate Majority Leader Chuck Schumer wants progress on both packages before the August recess, and he told senators to brace for a Saturday or Sunday session.

White House Press Secretary Jen Psaki said Biden himself “worked the phones all weekend,” and the administration was encouraged by the progress. But Psaki acknowledged “time is not endless.”

Adding to the mix, Donald Trump issued a statement Monday disparaging Senate Republicans for even dealing with the Democrats on infrastructure, though it’s unclear what influence he has. The former president had failed at an infrastructure deal when he was in office.

“It’s time for everyone to get to ‘yes,’” Schumer said as he opened the Senate.

Schumer said Trump is “rooting for our entire political system to fail” while Democrats are “rooting for a deal.”

The bipartisan package includes about $600 billion in new spending on public works projects, with broad support from Republicans and Democrats for many of the proposed ideas.

Yet there was little to show Monday after a grinding weekend of talks, putting the deal at risk of stalling out.

The Democrats and the White House had sent what they called a “global” offer to Republicans on remaining issues late Sunday, according to a Democratic aide close to the talks and granted anonymity to discuss them.

But Republicans rebuffed the ideas, saying the new proposal attempted to reopen issues that had already been resolved, according to a GOP aide also granted anonymity to discuss the private talks.

Sen. Susan Collins, a Maine Republican, said it’s time for Biden to become more involved. “I think it’s imperative that the president indicates strongly that he wants a bipartisan package,” she said.

A top Biden aide, Steve Ricchetti, was tapped for the direct talks as Portman fielded information to the other senators in the group, several senators said.

Democratic Sen. Jon Tester of Montana said, “There were too many cooks in the kitchen.”

While much of the disagreement has been over the size of spending on each category, labor issues have also emerged as a flashpoint.

Democrats are insisting on a prevailing-wage requirement, not just for existing public works programs but also for building new roads, bridges, broadband and other infrastructure, according to another Republican granted anonymity to discuss the private talks.

At the same time, transit funding has been a stubborn source of disagreement for the past several days.

Pennsylvania Sen. Pat Toomey, the top Republican on the Senate Banking, Housing and Urban Affairs Committee, which oversees public transit, raised questions about the size of the transit funding increase. He cited, in part, previous COVID-19 federal relief money that had already been allocated to public transit.

Democrats and public transit advocates don’t want spending to go any lower than what’s typically been a federal formula of about 80% for highways and 20% for transit. They see expanded public transit systems as key to easing traffic congestion and combating climate change.

Psaki has previously said transit funding “is obviously extremely important to the president — the ‘Amtrak President,’ as we may call him.”

The senators also appeared to still be debating money for public water works and removal of lead pipes after Sen. Mitt Romney, the Utah Republican, raised questions about the amount.

Also unresolved is how to pay for the bipartisan package after Democrats rejected a plan to bring in funds by hiking the gas tax drivers pay at the pump and Republicans dashed a plan to boost the IRS to go after tax scofflaws.

Funding could come from repurposing COVID relief aid, reversing a Trump-era pharmaceutical rebate and other streams. It’s possible the final deal could run into political trouble if it doesn’t pass muster as fully paid for when the Congressional Budget Office assesses the details.

The final package would need the support of 60 senators in the evenly split 50-50 Senate to advance past a filibuster — meaning at least 10 Republicans along with every Democratic member. A test vote last week failed along party lines as Republicans sought more time to negotiate.

Meanwhile, Democrats are readying the broader $3.5 trillion package, which would go beyond public works to include child care centers, family tax breaks and other priorities. It is being considered under budget rules that allow passage with 51 senators in the split Senate, with Vice President Kamala Harris able to break a tie. That package would be paid for by increasing the corporate tax rate and the tax rate on Americans earning more than $400,000 a year.