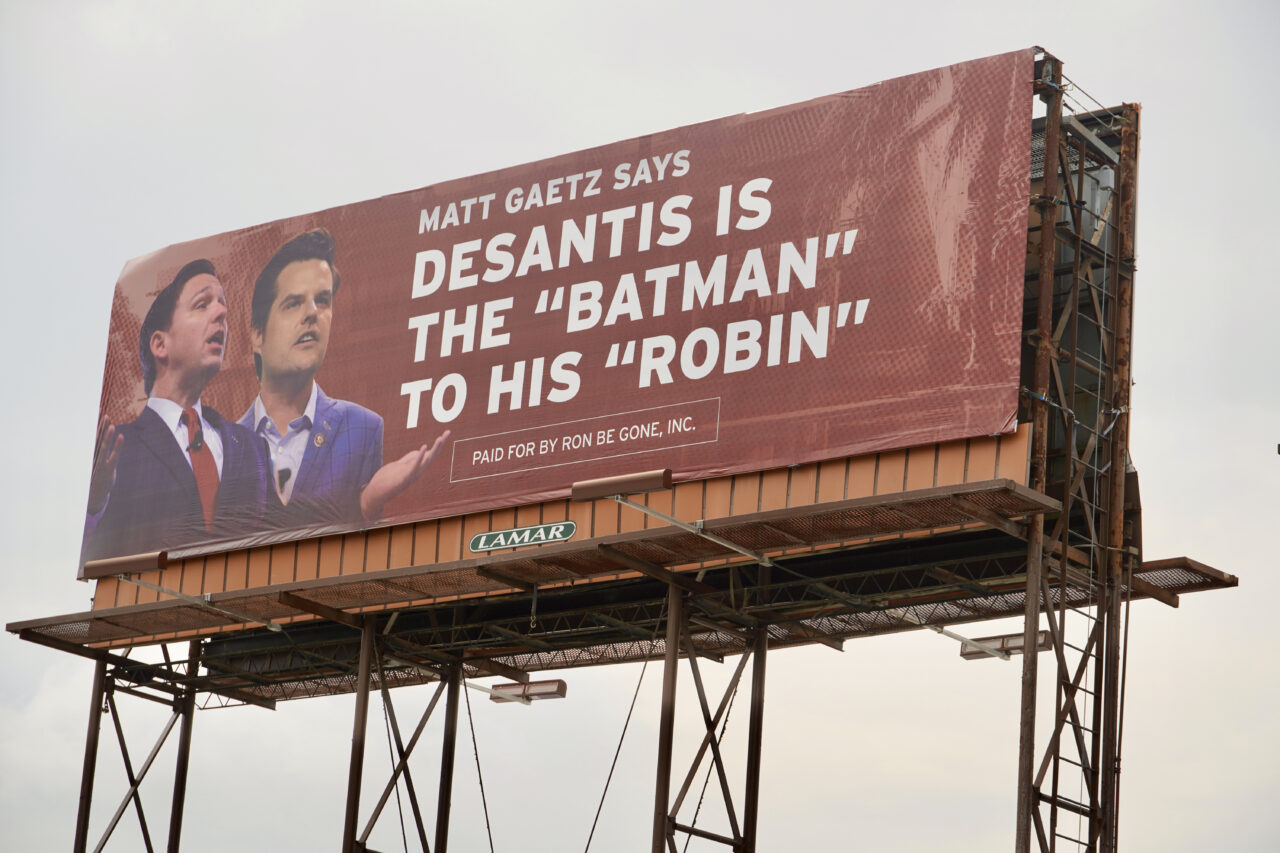 Located blocks away from the Governor’s Mansion in Tallahassee, the billboards reference an ongoing U.S. Justice Department investigation into whether Gaetz broke sex-trafficking laws by engaging in a sexual relationship with a 17-year-old girl and paying for her to cross state lines.

One billboard implies DeSantis knew about it: “Best friends keep each other’s secrets.” Investigators, however, have not tied DeSantis to Gaetz’s behavior.

The other features a joke Gaetz made while DeSantis’ was on the 2018 campaign trail for the Florida governorship: “Matt Gaetz says DeSantis is the ‘Batman’ to his ‘Robin’.”

“If Ron DeSantis thinks he can hide the true nature of his friendship with Matt Gaetz, he’s sorely mistaken,” said veteran Florida Democratic strategist Brice Barnes, one of the organizers behind Ron Be Gone. “Floridians need to know that their Governor owes his political career to a Congressman who is caught up in a federal investigation where someone pleaded guilty to multiple counts, including sex-trafficking a minor.” 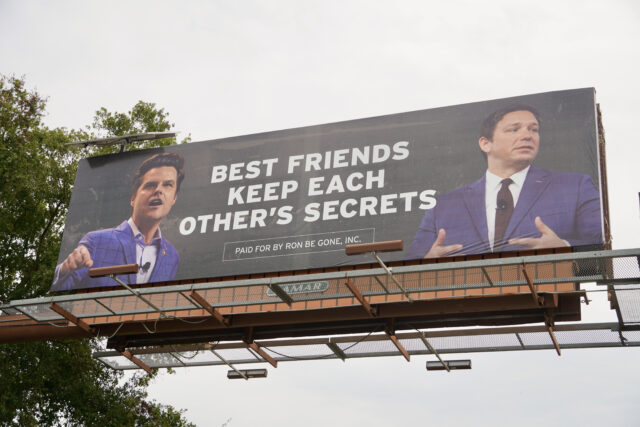 Sex between an adult age 24 or older and a person 17 or younger qualifies as statutory rape in Florida. Gaetz, 39, was in his mid-30s at the time of the alleged relationship.

Gaetz, who hasn’t been charged with a crime, has denied involvement in the scandal to which his associate, former Seminole County Tax Collector Joel Greenberg, pleaded guilty in May.

But the digital trail federal investigators are following may contradict the Fort Walton Beach Republican’s story. In April, the Daily Beast reported it obtained Venmo records from 2018 showing transfers of funds from Gaetz to Greenberg, who then transferred identical sums of money to teenage girls, one of whom was 17 at the time.

Outside of the investigation, pressure around Gaetz is also mounting.

This week, the sister of Gaetz’s fiancé posted videos describing the Republican Congressman as “weird and creepy.” The sister, Roxanne Luckey, alleged Gaetz once encouraged an older man to court her when she was 19.

Gaetz’s fiancé, Ginger Luckey, dismissed the videos in a statement to the Daily Beast.

“Matt and I are enjoying our engagement and are deeply in love. My estranged sister is mentally unwell,” Ginger Luckey told the Daily Beast. “She has been in therapy for years and our family hopes that after receiving in-patient mental health treatment, she will overcome the tendency she has repeatedly shown to engage in destructive behavior.”

A key ally to DeSantis, Gaetz urged the Governor to appoint several people who are now caught up in the federal investigation, Politico reported in May. The outlet quoted a former worker as saying, “By the time we were in heavy General Election mode, DeSantis was not doing anything without Gaetz being on it.”

Despite the threat of criminal charges hanging over his head for months, Gaetz has still proven himself to be a powerhouse fundraiser.

Between April and June, his reelection campaign pulled in about $1.45 million. He has raised $3.25 million since January.