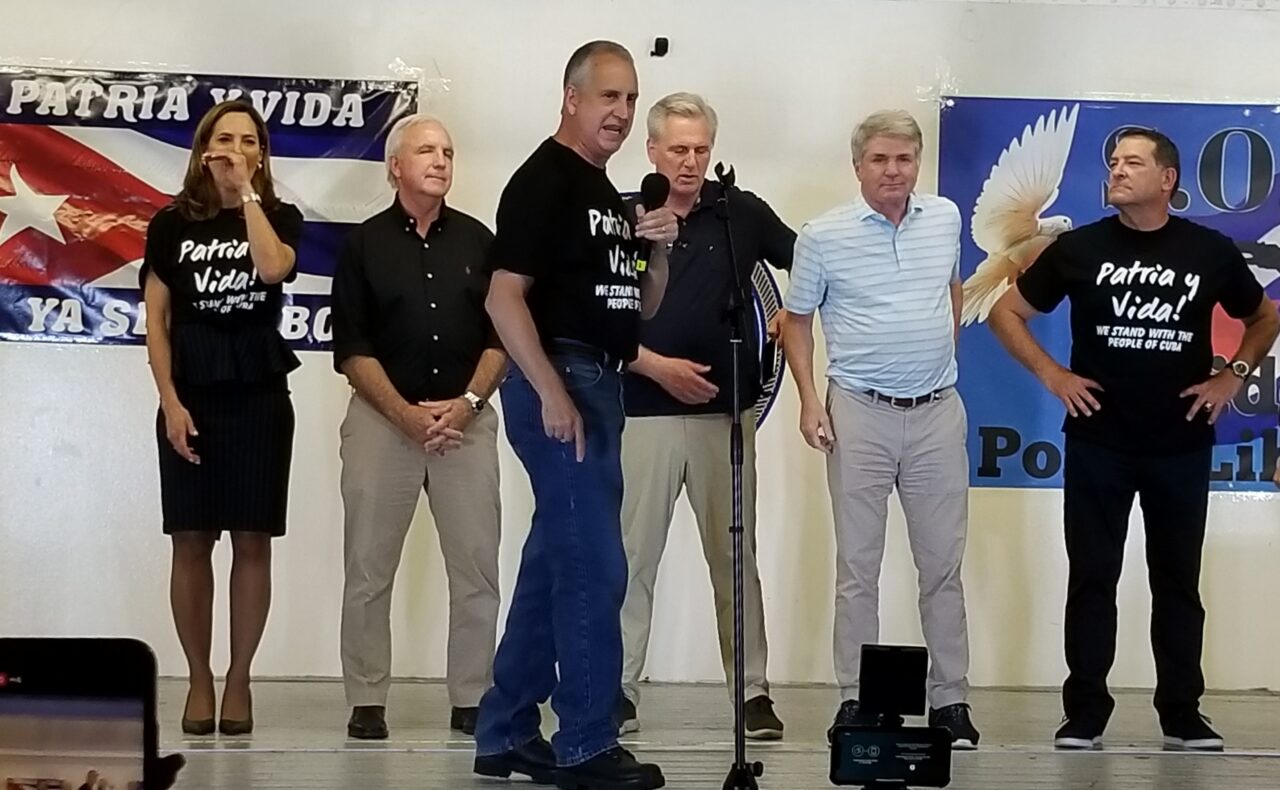 Democrats have called the Republican speaking tour on Cuba nothing short of virtue signaling.

For those energized by the recent, historic human rights protests in Cuba, a beacon for future Cuban liberty has been a group of Republican Miami-Dade Congress members and their Washington, D.C., allies.

On the night of Aug. 4, that group, operating under the umbrella title of U.S. House Minority Leader Kevin McCarthy’s “Leader’s Advisory Team on Cuba,” brought their speaking tour to the Versailles Restaurant in Miami’s Cuban enclave of Little Havana.

They were greeted by some 700 people, many waving and wearing Cuban flags and hoisting signs with free-Cuba messages, all demanding liberty for the island nation and more action from President Joe Biden’s administration. Some lauded former President Donald Trump and opposed “more stupid sanctions.”

But the event was far from joyless. For every passionate, indignant cry for U.S. military action there was an instance of revelry, camaraderie and celebration of a united cause — dancing, singing, embracing — as if the participants attending knew they were helping to write a page of history together.

Oddly, it was the outsiders among the Congress members speaking — the non-Miamians and non-Cubans — who elicited some of the most raucous responses of the night with calls for U.S. delivery of internet access to the island but few other concrete measures.

Those from Miami-Dade — Reps. Mario Díaz-Balart, Carlos Giménez and María Elvira Salazar — delivered oratories similar to ones they gave near the U.S. Capitol a week prior.

Giménez said Biden is missing a major political opportunity by not taking a more forceful stance on Cuba. Díaz-Balart again advocated for escalation. Salazar thanked McCarthy for his support, introducing him as “the future Speaker of the House.”

McCarthy mostly spoke in platitudes but asserted that for Cubans and opponents of communism, “This is not a moment; this is a movement, and we will not stop until we have freedom for Cuba.”

Democrats, meanwhile, have called the Republican speaking tour on Cuba nothing short of virtue signaling.

Abel Iraola, spokesperson for the Democratic Congressional Campaign Committee, called the speeches in Miami “a pathetic and cynical attempt to appropriate the Cuban people’s fight for freedom for their own political purposes.” They’ve lost all credibility, he said, due to their attempt “to invalidate millions of legitimate votes” from the 2020 election and continued “excuses for those who perpetrated the January 6 attack on the Capitol” among other improprieties.

“Throughout the long years that we Cuban exiles in Florida have suffered as our homeland has been mismanaged and destroyed by a brutal and incompetent communist regime, we have become accustomed to certain things,” Manny Diaz, chair of Florida’s Democratic Party, said in a statement. “One of them is seeing insincere, carpetbagging Washington Republicans coming down to Miami looking to reap the political benefits that often accrue from pandering to our community.”

Diaz called McCarthy “one of the least credible voices possible when it comes to championing the ideals of democracy” and that his “craven attempts to undermine the House’s investigations into the violent insurrection targeting Congress on January 6th (and) vote to overturn the results of the 2020 elections” are evidence that his support of democracy is circumstantial.

At the Wednesday night rally, Mike McCaul of Texas, a senior member of the House Foreign Affairs Committee, added a few common Spanish phrases with gringo-twanged inflections to his speech, which won favor with attendees.

“I’m from the great state of Tay-has. We love Cubans in Tay-has,” he said to “Thank you” chants from the crowd. “You know, Fidel Castro promised over 60 years ago a utopian society, communism and socialism. Guess what? It’s a lie. It does not work. It’s time for the Castro regime to end.”

Near the end of his speech, the longest by any elected official that evening, McCaul transformed the crowd’s chant of “Libertad” — “Liberty” in Spanish — to “U.S.A.”

Rep. Mark Green of Tennessee, invoked religion in advocating for Cuban freedom. He likened the right of a populace to express itself and stand up for its liberties to that of an underrepresented, faithful sect’s divine entitlement to unfettered worship.

“Liberty in Cuba would look like people of faith being able to practice their religion without harassment by the government,” he said. “Our right for freedom comes from God, and no government should ever take it away.”

Green pointed to the hardships Cuban people face daily, which the internet — through web access broadened under President Barack Obama’s administration — has helped to illuminate.

“When a mother doesn’t have to wait two hours in line for food, for rice and beans to feed her starving children, that is liberty,” he said. “When artists can say what they believe in their music and their paintings and in their creations, that is liberty. When the communist regime in Cuba breathes its last breath and from the ashes rises a democratic republic, that is liberty for Cuba. And it is time.”

nextSunburn — The morning read of what’s hot in Florida politics — 8.5.21